Writing is an art too: avenues for writing

Eight years ago, SAIC became the first art school to offer a graduate degree in writing. Now the writing department is developing an undergraduate program.

Eight years ago, SAIC became the first art school to offer a graduate degree in writing. Now the writing department is developing an undergraduate program.
When asked why an art school should have a writing degree, department chair Calvin Forbes replied, “It’s sometimes hard for people to understand, but writing is an art.” Dan Beachy-Quick, associate chair, elaborated, “It’s worth remembering that the seminal art movements didn’t include writing merely as a companion to what was going on in the studio: it was integral. Surrealism began as a literary movement; Dadaism had a very strong writing component.”

The department chairs believe that SAIC is ideal for writers who want to develop their art. “The advantage to being at an art school is that everyone in the community is involved in art,” says Forbes. Unlike traditional universities, “You don’t have to worry about a student who is a pre-med taking a poetry class because it fits his schedule. My experience [is that] that makes things a lot easier.”

According to Beachy-Quick, “The new program will be open to work that is approaching language in different ways. It can be a student who is interested in writing sonnets as much as someone invested in sound art, or in visual work that uses text as one of its central concerns. It’s going to be as three-dimensional as possible.” The program is expected to ted to be in place for the 2006-’07 school year, and will be as a Bachelor of Fine Arts degree with an emphasis in writing.

Uncategorized Writing is an art too: avenues for writing
« Previous Story 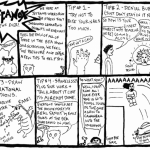