After leaving the Renaissance Society’s current show, Su-Mei Tse’s The Ich-Manifestation , its thundering sound continues to echo. The thud… thud… thud… of a large approaching predator leaves a haunting impression and reaches to very basic survival instincts. Is it an inescapable fate?

After leaving the Renaissance Society’s current show, Su-Mei Tse’s The Ich-Manifestation , its thundering sound continues to echo. The thud… thud… thud… of a large approaching predator leaves a haunting impression and reaches to very basic survival instincts. Is it an inescapable fate? Will the predator’s sound always continue to haunt those that hear it? Along with the pounding sound, Tse’s exhibition includes six large video projections, five of which are of oversized tortoises. Each of these projections consists of a single, large tortoise continuously advancing towards the viewer. In the installation, one then becomes confronted by figures that loom over one with a prehistoric stature. Evoking dominance over the human visitors, the tortoises’ vast size combines with the threatening noise to create humility in the viewer.

By standing in front of these screens, one questions the hierarchy of humans over the animal kingdom. For in this moment, the approaching tortoises are similar to their dinosaur ancestors. A long line of evolution unfolds in front of a viewer, and humans become very small compared to the predecessors of creatures from the dawn of time. The overbearing relationship of the giant tortoises confronts the self-important belief of humans as the dominant force on Earth. Such a self-reflexive moment questions humankind’s notions of self, which animals are believed not to possess. Tse hints at this meaning through her title of The Ich Manifestation (the manifestation of “I”), and the tortoise’s consciousness then becomes threatening. Viewers question thoughts of their very being and possibilities of the tortoise as a greater being. Perhaps humans have been over-confident in beliefs of their dominance.

So, these five single-shot screens of massive tortoises set a tone of disbelief in humanity’s superior position, and the sixth projection makes this proposal more complex. This screen is located in the center of the installation, and shows a small tortoise carrying a photo of its own image on its back. As the tortoise inches away from the camera, the photo on its back faces the opposite direction, towards the viewer, and evokes a reflexive moment of itself. The size of the tortoise in the sixth video is very small and its stature is no longer overbearing like the others. However, the tortoise carries its own image, so the potential of a tortoise with consciousness has been presented. Suddenly, size no longer matters, because the turtle possesses this self-consciousness, and this smaller figure is more threatening than the larger tortoises. Can it be possible that this power could come from such a small, harmless animal? Or, is it merely imposed by the self-awareness of the artist?

Thus, Su-Mei Tse’s ideas are challenging to admit, as it becomes difficult to take the humble stance of being equals with a tortoise. Perhaps humans are too self-absorbed for this admission, and doubt enters while thinking about the human intervention that created this proposal. However, the pounding sound effects are disturbingly left ringing in a visitor’s ears well after leaving the installation. The threatening noise stays in the viewer’s mind and forms doubt in their dominance as they nervously look for a looming menace.

So, whether large or small, the possibilities of other beings with a consciousness may terrify humankind. 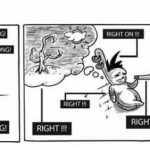 The Anti-Climactic Return of Bitter Bunny in "How to... 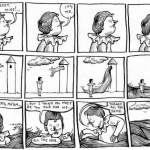