SAIC president, Tony Jones, gets excited when he talks about the plan for the new 50,000 square feet of space that will soon be part of the SAIC campus. The SAIC president spent more than an hour describing the future for SAIC’s physical campus and filled notebook page after notebook page of quickly sketched schemas to turn the plans into a three-by-five inch reality.

The new space will look a lot like the old space. Not just what we have now, but an important element of the deal between the school and Mesa Development LLC, which is in the process of finalizing the purchase of the three properties just north of the Sharp Building, is the historic redevelopment of the façades of all three buildings. As well, the corner that used to house Taza Restaurant, though owned by SAIC, will also get a historic refurbishment with the help of the developers.
Why is the school selling its buildings? The answer is easy: so we “don’t carry debt,” says President Jones. The sale of the buildings not only helps to relieve the school’s financial crisis of the last few years, but also the “money [from the sale] is going back into facilities.”

The developers who are buying the three buildings are planning on restoring the historic façades and tearing down the rest of the structures. In their place, they will build a big box of which the school will get two floors, for approximately 50,000 square feet total. The school will own this space, but the developers will build it. The money from the sale of the buildings will help make it possible for the school to build out the space into studios, offices or classroom space. The rest of the building will be parking, not for the school use, but to serve the very large residential tower that will be built on top.

It’s a win-win eventually, but, in the meantime, come this winter, the school will lose 30 studio spaces and the offices of such departments as Writing and Art Education. About 80 people total will be displaced, and it will be more than four years before the new building is ready for occupation. Finding homes for these people will be a challenge. It is a “priority to deal with the 30 studio spaces,” says President Jones, but they still don’t know how it will be done.

The most exciting element of the new plan: an SAIC center that is tentatively planned for the old Taza Restaurant space. The center will serve as a new entrance into the Sharp building and eventually, also, to the new space. The center will be a “multi-purpose space,” according to President Jones, where students can gather. It might house a coffee bar, a gallery space for student work and the admissions office. With any luck, the center will be underway by next summer.
President Jones says that the sale of the three buildings is “a big contribution toward meeting the goals” set up as part of the Five Year Forward Plan. It also provides an opportunity to meet many space needs of the school and will give students an opportunity to work on real projects.

If done right, the historic renovation of the outside of the Wabash building and a potential green roof on part of the new structure are two opportunities for the school to turn the project into a pedagogical tool. If the school turns its financial imperative to sell the buildings into an educational benefit for its students, this really will be a win-win. 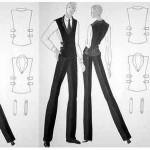 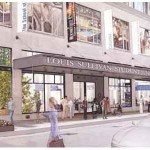