Student wins Chicago Theatre Design
Olga Feyman, a senior in the fashion design department, was awarded a $1,000 prize for her winning design for new Chicago Theater usher uniforms in March. Approximately forty students participated in the competition, which Joan Alper, a representative of the Chicago Theater’s owners TheatreDreams Chicago, described in a press release as “a valuable project for both institutions, where the students exercised their creative talents in a real-life setting, and the resulting garments increase the historic splendor of one of Chicago’s grandest entertainment venues.”

In the text accompanying her entry, Feyman states that her design was inspired by the Art Nouveau-style architecture of the theater itself, and incorporates Velcro closures and reversible material. Eighty ushers will begin wearing the vests she designed this month.

Two SAIC professors, Maud Lavin and Joseph Grigely, have been awarded highly coveted Guggenheim Fellowships. The Fellowships are awarded each year to advanced professionals specializing in an eclectic range of subjects so as to “provide Fellows with blocks of time in which they can work with as much creative freedom as possible.”

Over 3,000 applicants applied for the 2005 fellowships, of which 186 received awards totaling over $7,112,000. Previous recipients include authors Philip Roth and Langston Hughes and photographer Ansel Adams.
Both Maud Lavin and Joseph Grigely teach in the Visual and Critical Studies department of the school. Grigely plans to use the next year to develop his installation artwork, which has been displayed throughout the US and Europe. Much of his work to date has focused on his documentation of conversations in relation to his position as a deaf artist.
Maud Lavin, meanwhile, plans to use her Fellowship in conjunction with a year’s sabbatical from SAIC in 2006. “The Guggenheim [Fellowship] plus my SAIC
sabbatical together allow me for the first time in my life to have an uninterrupted year to write! This is literally a dream come true … I love teaching, but to have some clear time exclusively to write–that’s pure chocolate.”
During this time Lavin intens to complete a book in which she will address “representation of women’s lust and aggression in contemporary art and mass visual culture in the US.”

Maud Lavin stated that she is “thrilled about receiving the Fellowship,” adding that she is “also very happy that Joseph, one of my colleagues in VCS, got one too.” 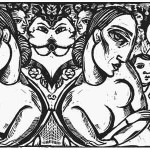 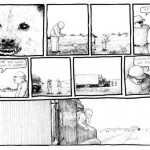