Story and Illustrations
by Robyn Coffey

“Today’s fashionable moustache is an individual look, dependent on the nature of the growth of the hair above your lip in terms of both texture and quantity. After at least three weeks of growth, you are ready to asses how you look and what style will make you look your best.”

A shorter box will rock on a round face, and a longer one will balance a small mouth.

The box is a fuller styled moustache, grown down from below the nose and filling the space of the upper lip (picture Charlie Chaplin, Adolf Hitler, Tom Selleck).

This moustache rocks on many facial types, especially round or square ones.

Traditionally the trademark of chinese film villains, the fu manchu is slowly being dragged back into style. It grows out from the center of the upper lip and down the sides of the mouth toward the jawline.

Grown out from the center of the upper lip, this moustache needs a lot of love, care, and moustache wax to maintain the curled tips.

Fellows with slick hair and sensuous mouths should keep it trimmed short just above the line of their upper lip.

A favorite of film stars in the 1930s and 40s, this moustache will always be a class act.

You’ll rock the triangular moustache if you have an extra-large mouth, teeth that stick out, or small facial features.

This moustache starts just below the nose and grows down and out toward the sides of the upper lip. It may be or not trimmed in the center.

Grow em’ out bushy, keep ’em trimmed short, with a moustache or not, “chops” or “burns” look great on large or round faces, and can be shaped to sharpen a soft chin or jawline.

Apersonal favorite, I have been unable to find agreement among experts as to the difference between muttonchops and sideburns.

Grown down to cover the mouth, the walrus flatters big square faces with prominent features.

A bushy style that covers the entire space of the upper lip and the width of the mouth.

You can rock this moustache if you have a wide or large face or big juicy lips.

A traditional moustache which can take months or years to reach full bushiness, the handlebar covers the entire upper lip with long ends which spread to either side of the face.

Uncategorized Field guide to the moustache 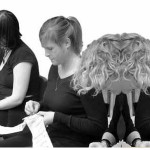