At the Mexican Arts Museum

Women, clothed in ebony sit silently in a row in front of the Mexican Fine Arts Museum. Heads are bowed in a meditative practice of thrusting the needle through the gauze sewing crimson names; that have been printed by hand in representation of the blood spilt in Juarez, Mexico. A small crowd has gathered to watch and wonder. “350 victims, 233 unidentified” is the name of the piece. “In Juarez there are 550 (American) factories with approximately 3000 employees at each. There is a gender tension, because the factories that are down there are assembly factories. The women are hired to do textile assembly, and then the items are retransported to the US, for cheap labor cost. The men don’t have any work, and the women are making about $4 a day working in these factories.

These men come from a culture where the supporter, the patriarchal figure in the family is important and now that the women are the one’s being the bread winner, so to say, bringing home the bacon it’s causing problems, where women are being subject to domestic violence. It’s not like this is all gang activity, it’s the type of thing where it’s boyfriends, husbands and brothers. It is people who are in these women’s everyday lives, who are raping them, beating them and murdering them in the desert. It is estimated that every ten days a women is killed in Juarez, and that figure is supposed to go up…It’s not the factories, because if you take away the factories you have nothing. So it’s nothing or something really bad…I think doing work like this (performance piece) has the potential to reach a lot of people. It could get across a message to people who can make a change… and that is what art is all about. If something is not done soon, there is going to be a lot more women dead in Juarez, Mexico,” according to Autumn Almanza, director and creator. 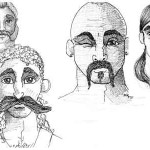