An artist is somebody who is armed with a camera or paintbrush, using these media to render some aspect of their life. So why are artists such a threat?

Even the most powerful figure in the art world would be shaking in his boots if the Secret Service came to pay him a visit. Making recent headlines was the Secret Service visit to the art exhibition Axis of Evil at Columbia College’s Glass Curtain Gallery. Of particular interest to the authorities was artist Al Brandtner’s Patriot Act, a fabricated sheet of stamps with a picture of a gun pointing to President Bush’s head. Apparently the Secret Service needed to check out the piece and make sure it was just some statement from an artist, posing no greater threat.

Maybe the irony of this all can be summed up through an analysis of the show’s title. Axis of evil was Bush’s categorization of U.S. enemies, the regimes that sponsor terror, during his 2002 State of the Union address. (The term stems from the axis of World War II – Italy, Germany and Japan) This show plays with the concept of dividing the world between good and evil.
Juan Cole, a Professor of History at University of Michigan and a leading scholar on the Middle East, nicely summed it up in three words on his blog by saying, It’s art, guys. Most of the artists in the show seem to be pleased that their work garnered a reaction.

Above all, the visit to Columbia from the Secret Service is not as scary as it is annoying. The problem is that although I can sit here saying that some of the best people I have ever met are my professors at art school, artists are consistently portrayed negatively outside institutions like SAIC. Art coverage tends to do little more than result in a decrease in art funding.

An artist is somebody who is armed with a camera or paintbrush, using these media to render some aspect of their life. So why are artists such a threat? If the show Axis of Evil is trying to prove that those who claim they are on the good side are perhaps the evildoers, it is also a poignant reminder that good deeds, such as sharing an artistic creation with others, often go unnoticed and are sometimes even punished. 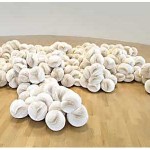