In many ways, Francis Picabia’s creative output is the model for all artists of the last century who eschewed aesthetic sensibility. 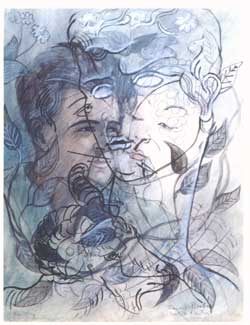 In many ways, Francis Picabia’s creative output is the model for all artists of the last century who eschewed aesthetic sensibility. He continually changed styles and is remembered best for his work within the irreverent movement known as Dada; indeed, he was recognized as the movement’s public face. Born to wealth, the artist studied at the ƒcole des Arts Decoratifs, after which he experimented with various painting styles, including Impressionist landscapes and fragmented Cubist compositions. Picabia created his earliest acclaimed works, reflecting this Cubist influence, between 1912 and 1915. Several of his paintings and drawings appeared in the pivotal Armory Show in New York and Chicago. The Art Institute’s collection now boasts three of these early masterpieces (two gouaches and the large painting Edtaonisl [Clergyman]).

During World War I, Picabia lived and worked in New York, producing a distinct body of work in which he portrayed human bodies as combinations of modern hardware. Eventually, his method of working in the dry style of mechanical illustration found its popular voice broadcast in magazines like 291 and 391. Both of these broadsheets provided the European Dadaists with a model for their subversive artistic strategies, such as satire and irony, which would define their movement. Picabia’s infamous portrait of the photographer Alfred Stieglitz as a broken camera remains an icon of the genre.

During the 1920s, Picabia gradually turned to a figurative style, partly in response to his friend Picasso’s neo-classicism. Still, in the early twenties, Picabia experimented with humorously unconventional methods, best exemplified by his painting Match-Woman I, in the Bergman collection. In this composition, and others like it, we can see the growing influence of collage on Picabia’s painting technique (which would be echoed in his drawings throughout the decade). His combination of flat color shapes, overlaid with linear networks, here described by matchsticks and hairpins, exhibit the constant influence of Picasso’s earliest papier collŽs.

Between 1928 and 1932, Picabia focused upon a new body of work to which he would attach the descriptive term Transparencies. These works are distinguished by multiple layers of transparent images, the characteristic moods of wistfulness and melancholy, and by extensive references to art of the past with which the artist imbued these compositions. As William Camfield has noted, Picabia’s interest in the concept and techniques of transparency grew from his preoccupations with simultaneity during the Cubist and Orphist epochs, as well as his work in film.

The artist’s self-portrait, which the Art Institute recently acquired, is a masterful example of this idiom. Grand in scale and powerful in execution, the drawing is composed of several overlapping human heads, various flora, as well as a goat or ram’s head. Picabia has depicted himself as a debonair playboy, fully rendered using all the media in his palette. His gazes self-confidently at some point outside of the pictorial space, borrowing his pose from the publicity still commonly seen in Hollywood press packets. Peeking out from behind him is a female admirer, who offers the artist a bunch of grapes. In the next layer are suggestions of two more heads, which intersect at the prominent lips of an Apollo-like figure, which forcefully occupies the point closest to the picture plane. At the bottom of the composition, Picabia has drawn a ram’s head. What all this means is open to conjecture, but it was well known throughout this period that the artist experienced personal turmoil, particularly reflected by his marital infidelity. In fact, his flirtation with his son’s governess Olga Mohler became a full-fledged affair by early 1928.

Prints and drawings hours are:
Classes/Groups of 25 or less, Tuesday through Friday, 10:3011:45 AM; Individuals (one to three people looking at the same objects), TuesdayFriday, 1:304:15 PM

Image courtesy of the Art Institute of Chicago 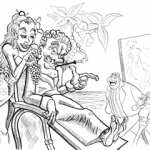