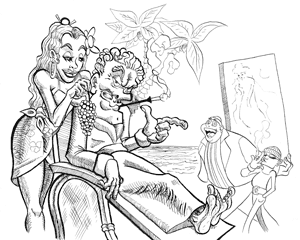 It’s not about the world of design, it’s about the design of the world, and so the story goes behind Massive Change: The Future of Global Design the exhibition, website, and book. The exhibition just began the second leg of its tour, opening last month at the Art Gallery of Ontario in Toronto. Massive Change will eventually breeze through the Windy City, slated to open in mid-September 2006 at the Museum of Contemporary Art. The issues brought up in the show are touched on in the recent discussion at SAIC around Thick Design and the disappearing boundaries between art and design. This massive exhibition is worth at least a look.

Massive Change is a collaboration between Bruce Mau, his design team Bruce Mau Design and the Institute without Boundaries (IwB), a postgraduate design program within the Bruce Mau Design studio. Doug Chapman, a student at IwB says, Massive Change intends to show a new vision of design as a largely unrecognized yet powerful force shaping almost every aspect of our world. In curating MC, we took aesthetics off the table and considered a designed object or system not for its visual appeal, but for its capacity to bring about change or fulfill a need.

Mau is one of the world’s leading graphic designers, known for books such as Life Style and S,M,L,XL, with Rem Koolhaas. Mau recently said that he would prefer to be called a designer, rather than a graphic designer, which he found to be too limiting. Massive Change represents his embrace of the entire world of design by analyzing everything from highways, to gamma rays, to sneakers. With this exhibition, Mau asserts that there is no such thing as doing too much or thinking too large.

Robert McAnulty, Assistant Professor in Architecture, Interior Architecture, and Designed Objects at SAIC, as well as an architect with Robertson + McAnulty Architects, had this to say about Massive Change:

Massive Change (which I understand to be a massively collaborative project) suggests that contemporary design practice should be redefined following the collapse of the segregated disciplines’ (Architecture, Designed Objects, Visual Communications, Fiber/Materials, Fashion) as we once knew them. We owe Bruce Mau and his gang our thanks for exposing the possibilities of a rejuvenated design practice.

As an installation design, I don’t think Massive Change is as successful as some of Mau’s older, more graphic design’-oriented, projects like the first of the Zone books, Zone 1-2, 3-4. But it may be that Mau is intentionally trafficking in the kind of brand-speak that characterizes so much of our visual culture. Perhaps he has decided that the most effective way to change society is from within via guerilla warfare. I, for one, welcome this challenge to the romanticism of old-school (except at old-school-SAIC) strategie sof critical’ resistance from the outside’ or the border.’

One thing for sure, Massive Change will make a difference more than can be said for most of the design work in which we find ourselves immersed. As a project, it celebrates the thickness of the ‘post-critical.’ I say: bring it on…

Uncategorized Massive Change and the Future of Design