Art, Life and the Tourist’s Eye 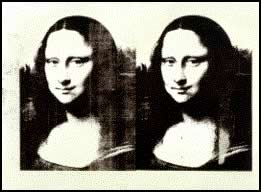 MCA’s Manilow Senior Curator, Francesco Bonami, guides museum visitors on a journey around the globe with Universal Experience. The show optimistically asserts that we live in a global age in which icons from the Eiffel Tower to the Great Wall of China are all within reach–all within the same universe. Yet, if a world tour is not on your agenda, the show proves that you can still see the world. In fact, viewing some of the works of art in Universal Experience, may be better than seeing the real thing.

Instead of traveling to Milan to see Leonardo’s “Last Supper,” check out Hiroshi Sugimoto’s photograph of a Japanese wax museum’s reenactment display of the Last Supper. Not only is it cheaper to visit the MCA, Sugimoto’s proves that a recent photograph of a scene in Japan can bring to mind the Italian Renaissance. Also on view is Andy Warhol’s eight-hour film of the Empire State Building that puts the New York icon in a whole new spotlight. The building looks cold and as alone as a “silent film star” without the surrounding New York bustle. A photograph of the Hollywood sign placed in a Palermo landfill, an installation from 2001 by Maurizio Cattelan, at once shows the unattainable glamour, yet trashy nature of Hollywood, California.

A global perspective driving the multitude of art biennials is also the force behind this museum show. Undoubtedly Bonami’s international traveling duties as a curator (he curated the 2004 Venice Bienalle) provided inspiration as well as easy- access to over 75 international artists whose work he selected for the show. The hopefulness of globalism is reinforced right as you enter the museum, in the entrance hangs Jim Hodges’ giant wall-piece with the phrase, “Don’t be afraid,” written in many different languages. This is not the only aspect of travel analyzed in Universal Experience, from Anish Kapoor’s “My Body Your Body” which addresses philosophical journeys, to Darren Almond’s depressing film of Auschwitz bus stops. Doug Aitken’s “The Moment,” an eleven screen video installation, is like a cracked-out version of Sofia Coppola’s Lost in Translation.

Since I currently possess a one-way ticket to nowhere, I was happy to see some art that highlight Chicago as a destination spot. On display are four Catherine Opie works of Chicago’s architectural gems photographed at nighttime. Artist Zhan Wang looked at pictures of the Windy City for his installation, “Urban Landscape,” which consists of hundreds of stainless steel pots, pans, and any other imaginable kitchen utensils piled to form a cityscape. Stacked bowls resemble the Marina Towers. Wang’s installations aim to show “the struggle between tradition and progress;” the overall effect is a dazzling, gorgeous display.

This exhibit excites like stepping off a plane in a new place, overwhelmed by how much there is to do and see. When you are finally done looking, Universal Experience makes you stop and think about where you have been…and where you may want to go.

Showing at MCA; through June 5