Rick Storer Answers Questions about Leather, Art and the Mainstream

Rick Storer Answers Questions about Leather, Art and the Mainstream

Chicago, the city of Broad Shoulders, exudes a physicality of endurance, no wonder that its home to two internationally recognized leather institutions: the annual International Mr. Leather Competition (IML), and the Leather Archives and Museum (LA&M). The upcoming IML (May 27-31) provides an opportunity to explore the Leather Archives and Museum and talk to its executive director, Rick Storer, about the leather community

The LA&M preserves a history often forgotten. The archive and museum houses artifacts and material culture of the leather community. It also works on an oral histories project. According to the Leather Archives and Museum’s website, the institution preserves the history of leather so that future generations “…will be allowed to build on, rather than reinvent the traditions and truths of those who lived Leather/SM/Fetish lives before their own.”

After exploring the museum, Rick Storer helped me to contextualize some of the questions this collection raised about the leather community and its interactions with art and mainstream culture.

F News: The leather community has a lot of artists and thinkers associated with it (Robert Mapplethorpe, the poet Thom Gun, Michel Foucault come readily to mind). Why do you think this is? How do you explain this attraction?

Rick Storer: There’s no hiding the fact that the leather community is rooted in sexuality. Although our sexuality is often driven by uncontrolled forces, society goes to great lengths teaching us to control those forces. I believe it requires a great deal of thought to express one’s sexuality in today’s culture. To express one’s own sexuality, or that of others, through poetry, art and photography requires even greater insight and thought. I believe the people you mention in the question represent this insight and thought.

F: The Leather Archives and Museum has many functions—preserving leather artifacts, archiving artwork, collecting the oral histories of members of the leather community, etc. Is it difficult to gather this historic material? What has been lost? What do you think can be regained or rediscovered?

RS: The very intimate nature of the gatherings and activities of the leather community is extremely difficult to gather and document. As an example, it’s very easy to document that a leather club in Oklahoma City produced an event called Tribal Fire. We can even document the names of the programs and activities that happened during that event. In order for participants to feel truly comfortable in an intimate environment however, there are usually no cameras, no recording devices, and no journalists at these events and programs. The experiences within the programs and activities stay strictly within the hearts and minds of the participants. This example can be broadened to many leather community events around the world. In situations like this, oral histories become extremely important. Even though oral histories capture personal biases and incorrect memories, they are nearly the only way to document the experiences that reside in the hearts and minds of event participants.

Even when documentation is captured, it can be difficult to get it to a repository such as the LA&M. Especially with gay men and lesbians, it is often the family who takes legal title to their possessions when they pass away. The family will discover bar posters, photographs, event program books and other memories and throw them away. Families often view this as a way of erasing their son’s or daughter’s interest in the leather community. This has even happened as their partner is forced to stand aside as the items are tossed into the dumpster. The LA&M does outreach to educate people about the importance bequesting their collections in a will.

RS: This is difficult for me to answer, as the LA&M is dedicated to being behind the front lines and preserving a record of the past. There are leather activists and leaders that are on the front lines participating in the mainstream culture. The leather community has tried, and I believe will continue to try, to take a proactive stance in establishing itself within mainstream culture. Clubs and events which were once very restricted to members and their close friends are now open to the public. As positive images of the leather community are portrayed in mainstream media, the community will rally behind it and support its existence. Likewise, when negative images of the community are represented, activists get out their pens and write letters. There are organizations, such as the National Coalition for Sexual Freedom, to lead and organize efforts to inform the mainstream culture about what it is we do.

F: How does the IML relate to other beauty contests? In many ways, I feel that the IML inverts the traditional criticism of these contests, in that they demean the participants. That is to say that the IML offers a positive visibility to an often-misunderstood community.

RS: Several historians have said that the early years of IML were nothing more than a beauty pageant and a way for a bar to make some money. As the popularity of IML grew however, contestants and winners used their title and “soapbox” to become activists and spokesmen for the community. This trend has certainly continued. It’s true that some contestant points are earned by looking good in a jockstrap. To win the contest, however, contestants must also earn points by speaking intelligently and passionately in front of a crowd, and also sharing personal experiences and opinions during an interview.

F: How do you think the leather community will inform the future of both art and popular culture? Will it be a simple-minded co-opting of leather material (both physical artifacts and ideas) by the other spheres, or will it be a more complicated dialogue?

RS: I think the leather community is very committed to changing societal views on alternative forms of sexuality. Look at the way the black community, the Women’s Movement, and the gay and lesbian community have informed today’s art and popular cultures. I think the leather community, through activism and education, is trying to do the same thing for the future of these cultures. Here’s a great reason for the existence of cultural repositories such as the Leather Archives. By examining the history of the leather community, and movements with similar goals, activists can plan strategies for informing art and popular cultures. To answer the question, there will most likely be a complicated dialogue. I think it will go very similar to the dialogues of the other movements and communities I mentioned. Sometimes that dialogue is so passionate that it sounds like an argument. Nonetheless, it’s a dialogue that has to take place. 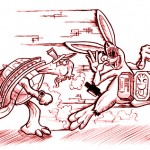