F wants to know whether “film” is truly dead and if digital tape is the obvious heir apparent. Is there any other medium on its way out? Or, on the more optimistic side, is there any medium making a comeback?

By F Newsmagazine May 30, 2004 Uncategorized 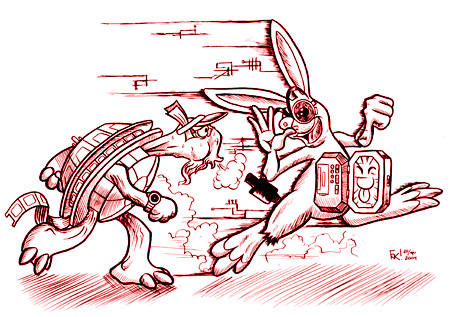 It is no secret that digital formats (editing, photo, video) have quickly replaced actual film stock and more hands-on editing systems. Digital technology is more egalitarian: easy to use, convenient, more available to the public, cheaper, and has a faster turn out rate (in terms of production). The likes of director Robert Rodriguez and even artist David Hockney have pronounced the medium’s death publicly. These “dead media” can be considered on the same, almost derisively, pretentious pedestal as vinyl.

F wants to know whether “film” is truly dead and if digital tape is the obvious heir apparent. Is there any other medium on its way out? Or, on the more optimistic side, is there any medium making a comeback?

Film is not dead yet: five words to prove it:
“ Slide Projector versus Video Projector”

I don’t believe that film will ever die, I don’t think anybody will let it. It may eventually suffer the same fate as black and white movies and be reserved for nostalgic feeling films, but it will never die. And as long as 35mm film is still around, 16mm film will continue to be produced– because it is vitally important for both film and art students. Also, digital technology is getting very good, but it still hasn’t reached the quality or the manipulative ability that film has had for the past 100 years.

I hate to admit that I think film is on the way out. I would much rather spend hours in the darkroom printing than sitting in front of a computer and slowly going blind. Unfortunately, I think we all have to realize that this is happening. I would rather stay in the dark ages, but its always about time and money right?

Film does seem to be on the way out, a move I predicted would not come until pixels got smaller than silver nitrate crystals. Apparently they have. Although to get the same resolution in Powerpoint as we had in film requires 3-5 MB per image. I prefer the flexibility of slides—I use them as visual backdrops and illustrations—samples, if you will, for architectural history and historic preservation raps.

I was talking to a printer last year about the loss of quality in the new technologies and how they affected his business, and he made a very straightforward observation: People are willing to trade a loss in quality for a gain in control. That is the digital revolution—it is more democratic and more flexible and more widespread and lower quality.

1. We already went through this quality vs. control switch with lantern slides
2. Digital archive remains an oxymoron for now.
3. Vinyl isn’t gone—the newest, funkiest music needs vinyl still—guitars seem to be under more threat than vinyl. Film and slides will probably retain some status like this—remaining only in art schools while the rest of the world goes completely digital.
4. Predicting the rise of new technologies is always safer than predicting the death of technologies. Technology tends to be additive. Vacuum cleaners (120 years) haven’t displaced brooms. Microwave ovens (65 years) haven’t replaced stoves. Television (70 years) hasn’t replaced movies. Books (560 years) haven’t been replaced by any of this—and publishers haven’t switched to digital yet.
5. It’s better for the economy if you buy two systems. Three is even better. And four? Even better.

I don’t believe that film is truly dead. As long as there is money available, there will be film. Film definitely has certain aesthetic qualities that video cannot possibly emulate and involves an actual physical and tactile process of editing that many working in the medium enjoy. However, there is also an increasing number of filmmakers who are digitally transferring footage, editing on video, and finishing on film.

Video is also a very unique creature. Working to its advantage are its various formats which are similar to having a variety of film stocks, its real time capabilities, digital editing and effects capabilities, affordability, and speedy turn out rate.

I don’t believe media dies. Its always going to be used. Sometimes one medium can convey or express something better than another or perhaps certain projects may call for particular aesthetics. If any medium is going to die, it is probably going to be the slide and the cd (have you noticed the increasing number of ipods?) There will be an HD, recording directly to hard drives (as in the film “Russian Ark”—one feature length take), and of course Hi8, baby you can’t forget good ole Hi8.

The Art of Nation Branding