Do iraqis have freedom of speech?

As Americans we have all grown up with basic tenets that we take for granted. Free exercise of religion, freedom of press, freedom of belief, freedom of speech–all part of our American system that most of us don’t think twice about. But if one of these freedoms were suddenly taken away, what would your reaction be? Perhaps it would be similar to that of the Iraqis.

As Americans we have all grown up with basic tenets that we take for granted. Free exercise of religion, freedom of press, freedom of belief, freedom of speech–all part of our American system that most of us don’t think twice about. But if one of these freedoms were suddenly taken away, what would your reaction be? Perhaps it would be similar to that of the Iraqis.

The Iraqi people found their right to free speech challenged when on March 28, American soldiers shut down the weekly Al Hawza, a Baghdad Shiite newspaper. The occupying forces defended their position, stating that the newspaper had continually printed lies about the American presence, but the official explanation fell on deaf ears. By the time night fell that day, thousands of Iraqis gathered in central Baghdad to rally against the closing. As soldiers rushed to contain the crowds, shouts of “No, no, America!” and “Where is democracy now?” could be heard through the din, and groups were spotted burning the U.S. flag.

Although the June 30 target of handing back sovereignty is only weeks away, Iraqis say that actions such as these make target goals of security and democracy seem that much farther.

“ When you repress the repressed, they only get stronger.” says Hamid Al-Bayati, the spokesman for Supreme Council for Islamic Revolution in Iraq. “Punishing this newspaper will only increase the passion for those who speak out against the Americans.”

But the Americans stand by their decision. Al Hawza has been accused of being an outlet for its leader, Moktada Al-Sadr, a young Shiite cleric who is known for openly being against the United States. There were two articles that were particularly inflammatory, one called “Bremer Follows the Steps of Saddam” (referring to L. Paul Bremer, the top administrator in Iraq). This article singled out the Coalition Provisional Authority, the temporary governing body designated by the United Nations as the lawful government until the June handover. It alleged that the CPA was “implementing a policy of starving the Iraqi public.” The second statement which prompted the shut down was a report in February about an explosion killing more than 50 Iraqi police recruits. It stated that the attack was not a car bomb, as occupation officials stated, but an American missile.

Part of Bremer’s power to shut down the paper derived from a law that passed in the CPA in June stating that news media organizations must be licensed. That license, however, can be revoked if the organization publishes or broadcasts material that incites violence or civil disorder. Since its invocation, the law has been enforced several times. In September of 2003, reporters from two satellite Arab channels, al-Arabiyya and al-Jazeera, were barred from covering official press conferences and from entering official buildings for two weeks. In November of 2003, Al-Arabiyya was banned from broadcasting in Iraq based upon an audiotape believed to be of Saddam Hussein urging the Iraqis to resist occupation. January of 2004 saw Al-Jazzera banned from covering official Iraqi Governing Council [IGC] activities because of a talk show guest who asserted that some IGC members had relations with or visited Israel.

Even though the al Hawza has been told they can re-open in 60 days, editors have stated that they are out of business. Saadoon Mohsen Thamad, the paper’s news editor lamented, “We have been evicted from our offices, and we have no jobs…how are we going to continue?”

The event has also caused a stir among Iraqis who assert that shutting the newspaper down at this time will only serve to increase anti-occupation sentiments. Many say that there was no basis for the closure as the letter outlining the indiscretions did not cite material that directly advocated violence. Even if there were a basis though, “…[the paper] should be free to express its opinion,” asserts Kamal Abdul Karim, the night editor of the daily Azzaman.

Iraqis also fear the future plans of Al-Sadr, since these actions have only served to give him more credibility with the poorer classes. American authorities state they weighed the risks beforehand but, according to Al Elsadr, the media liaison for the American occupation government, “…we basically concluded that we couldn’t afford to wait for another issue to hit the streets.”

Perhaps the Americans felt that the steps they took were the right ones, but when we consider what our troops were supposed to instill in Iraq, do these actions really support their goals? Ali Alyassari, the editor of al Hawza doesn’t believe so. “That chain you see on the door is one of the American symbols of freedom,” he says. “Do you think this is political freedom?”

Uncategorized Do iraqis have freedom of speech?
« Previous Story 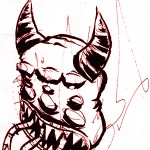