What does one call the space between the body and the garment it wears? Where is the line between urban and suburban? What are the defining factors that distinguish art and design? SAIC professors Andrea and Hennie Reynders urge their students to explore, as they describe, “centers and borders” such as these in the course Fluid Interfaces, which they created and have been co-teaching since 2001.

By Audrey Michelle Mast May 31, 2004 Uncategorized 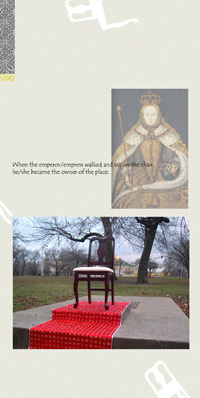 What does one call the space between the body and the garment it wears? Where is the line between urban and suburban? What are the defining factors that distinguish art and design?

SAIC professors Andrea and Hennie Reynders urge their students to explore, as they describe, “centers and borders” such as these in the course Fluid Interfaces, which they created and have been co-teaching since 2001. Their seminar/studio syllabus combines postmodern theory, critical problem solving, scholarly research, and studio practice into a truly unique experience.

To understand the nature of uniquely modern tensions, students read Jean Baudrillard, Marshall McLuhan and the Futurist Manifesto, among other work, and study the idea of Il Quarto Sesso (The Fourth Sex, the awkward sexual identity of a teenager) as defined by Francisco Bonami in the eponymous exhibition he curated with Raf Simons. They also look at avant-garde fashion like Hussein Chalayan’s dresses that convert into portable furniture-garments for the urban nomad.

Andrea and Hennie’s backgrounds are quite different but very complimentary—Andrea is chair of the Fashion department, an alumna of SAIC, a consultant and curator, who, as her husband Hennie describes, “has crossed the boundaries between design and art, and contributes specifically in her capacity as a team member in the making of objects, and in her ability to work around a student’s ideas and needs.” Hennie, an Assistant Adjunct Professor in the Department of Architecture, Interior Architecture, and Designed Objects, was teaching and practicing as an architect in South Africa when he came to SAIC on an invitation in 2001. He holds an M.A. in architecture from UIC and is currently studying for a P.h.D. at the University of Edinburgh, researching the “social shaping of technology and the interface between electronic space and physical space.” He feels strongly about the social, economic, and political implications of the decisions designers make. 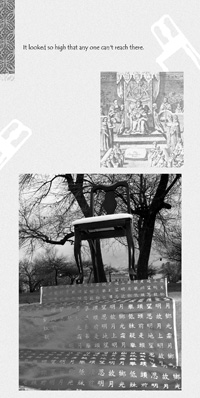 Interior Architecture student Somi An says that “the combination of [Andrea and Hennie’s] lectures work very well” and that their respective backgrounds in fashion and designed objects meant that, for example, great consideration was given to why a simple garment like a hat can become a powerful symbol. Kathrin Eirich, graduating senior in the Interior Architecture department, agrees. “In their class I think the best ideas came out of long and passionate discussions…it was a very fertile environment,” she says.

A typical class project is to conceptualize and build a multipurpose lifesaving object (such as a blanket or radio) meant to be air-dropped into a natural disaster or war zone. But the object must have a secondary, opposite life of its own: as a desirable, fashionable commodity, paying for its lifesaving distribution to the needy by demanding a high value among status seekers. Hennie and Andrea give the example of the “Freeplay” wind-up radio that is sold as a necessity in Africa for $9 – $12 but sold by MoMA as “lifestyle design” for ten times that amount. Kathrin Eirich’s project was a bundle of biodegradable felt pieces attached to each other with Velcro that can be configured into a coat, blanket, tent, or sleeping bag, and is also burnable and edible. 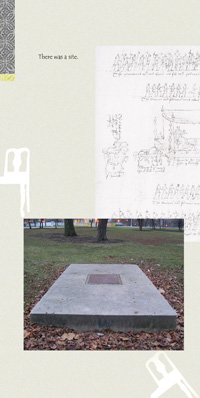 Other projects are more conceptual: students use either a map, an X-ray, or a designer shopping bag as the basis for a game of “silent acts of communication,” wordless messages like those conveyed through color, sound, expressions, and gestures. The resulting games must communicate clear narratives or ideas.

Students say they are inspired by the variety of media their colleagues use to execute their projects. As Tacita Morway, a junior in the Painting department, who took the course last semester, describes, “There was a student who videotaped the death of a dragonfly, another student who created a garment of light, [and] we were all involved in a public performance on a beach…it is the diversity of projects presented in a single critique that stands out.”

Morway adds, “Many classes [at SAIC] are open-ended, flexible…the instructors give students the freedom to explore pretty much whatever they want. Fluid Interfaces also encourages this kind of undirected exploration but manages to do it in such a way that enforces serious thought behind each decision, or consideration of each intuitive, unplanned move.”

It is this focus on decision making, on communication skills for the artist, that may be the most valuable lesson learned. “The biggest part of the class is thinking,” notes Somi An, who was encouraged to think about her work on an abstract, philosophical level, continually searching for new layers of meaning. In her class, each student developed work that dealt with a bare, anonymous stone slab in a city park—and also with particular words, in An’s case, “symbolic” and “occupation/deoccupation.” She chose to install a red carpet and an antique chair on the slab, simultaneously suggesting all of these.

“ I was inspired and influenced to work in ways that make it hard to put art over the couch,” says Sculpture and Art and Technology student Andres Laracuente, who took another course co-taught by Andrea and Hennie, Fashion and Architecture: Clothing Us. He describes a performance project in which he covered his body in gesso and did as many sit-ups as he could on a found blanket in Lincoln Park that demonstrated “the idea of priority in our culture, as well as the idea of occupation.” Students also say that both professors are tough and demanding in critiques, but that they relished the challenge. “I like the pressure, “ says Laracuente. “We need tough professors. Very, very badly.”

Current Fluid Interfaces students will exhibit their work in an upcoming two-day exhibition at a new space in River North, which is sure to feature a wide range of media and experimentation with methods of communication.

Photos courtesy of Somi An 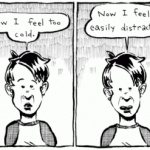 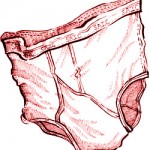 Wake up and smell the shorts