While Chicago Mayoral elections come to a close, the four main competitors have set a national stage, and it seems that a good deal of Chicagoans and Americans alike are hoping for a runoff. The race between what seems like Rahm Emanuel, Jesus Chuy Garcia, and everyone else has been an argument largely about education. This, for Rahm, has been appointed as one of the worst platforms he could run on. That might explain the Mayor’s recent advocacy for teachers unions, but with their support behind another candidate, it seems too little too late.

In order to run unopposed — to be re-elected — on February 24 the standing mayor must win over 50 percent of the vote. If he fails to do that, then he will have to face the second closest nominee as a competitor in a runoff that will be decided on April 7 by voters in Chicago. 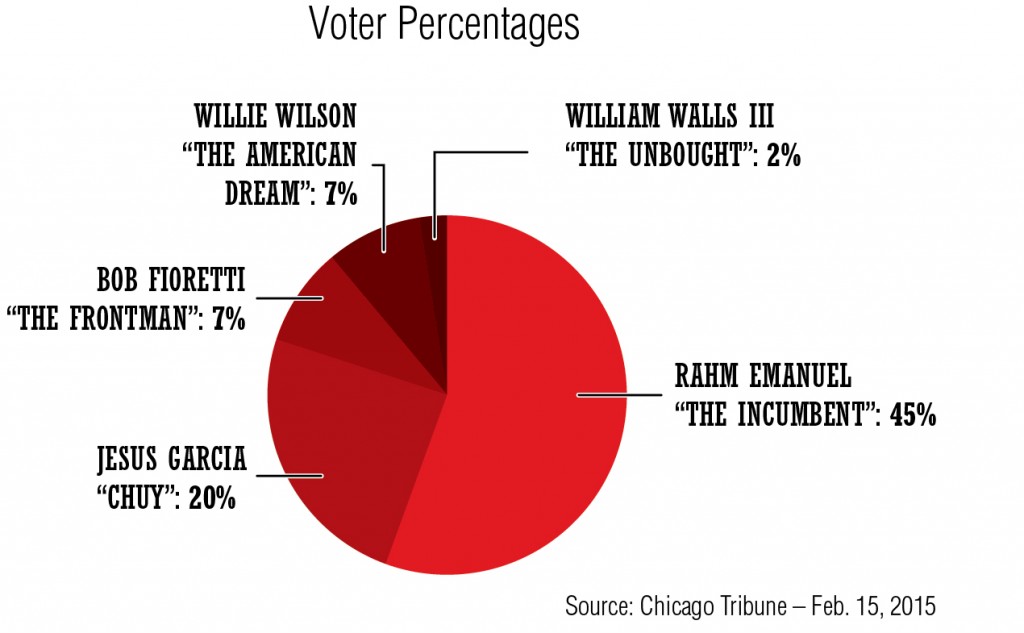 Infographic by Anna B. Smylie

The Rahm who takes ownership for a plan to send Chicago Public School students to college for free and the 11% increase in high school graduation rates is a far cry from the Emanuel who closed 49 public schools in 2013. Though Mayor Emanuel leads the polls with 45% of votes according to the Chicago Tribune, groups such as the Chicago Teachers Union continuously draw attention to what even CNN calls Emanuel’s “tale of two cities.” The Mayor has long maintained systemic inequality by juggling things like TIF funds, private donations, and rebuilding the city that will draw in more tourist dollars.

There has also been some latent anger about Emanuel’s use of tax increment financing programs (TIF) supporting the new Marriott Hotel and DePaul basketball center. The TIF program is basically repurposed property tax dollars which are taken from various parts of the budget (i.e., public schools and work programs) and repurposed to allocate public city funding that might, in turn, end up making a bigger payout for the city. The $55 million dollar expenditure allows both buildings to be classified as public property, which means that they don’t pay tax on the land where they are built. Emanuel’s tale of two cities is one of a political machine mayor, washing his hands in Chicago’s segregated neighborhoods.

“Let’s support the bigger man,” Karen Lewis said in a taping of her endorsement of Jesus “Chuy” Garcia in late October 2014. Garcia has an inspiring backstory, coming from a small village in Mexico up to Pilsen and growing up in the midst of racial tensions in Chicago. Karen Lewis, who is the head of the Chicago Teachers Union (CTU), asked Chuy to run in her place against Emanuel when she found that she had been diagnosed with a brain tumor. Garcia often runs on the platform than Emanuel closes schools, mental hospitals, and other important public service buildings in order to siphon off money for programs, which cater to the elite of Chicago. Although Garcia has promising ideals like his push for gun control to curb shootings across neighborhoods in Chicago, as well as his ban passed against officials for detaining people whom they suspected were violating immigration laws on unrelated charges, it is still a wonder if Emanuel’s very public track record of manipulating city funds to benefit his donors.

Garcia’s motto in his office, as many newspapers have written about is “Si Se Puede,” or “Yes We Can, a motto taken from the United Farm Workers Movement led by Cesar Chavez in the 1960s to raise wages and provide better conditions for Filipino and Mexican agricultural laborers. There are a few things reporters guess might stump Garcia, such as his low donations compared to Emanuel, and he simply does not have the funds to advertise the way Emanuel does. But Garcia has been an elected official on state, city, and county levels since the 1980s, when his political career began. If anyone faces the current mayor in a runoff, it will be Garcia, which is where he does have an advantage. When Emanuel closed 49 public schools in 2013, he affected mostly minority communities on the West and South sides. If Garcia can channel those votes — the ones of parents and students who suffered at the hands of those very closures — then beating the political Machine Mayor Emanuel wouldn’t be as much of a challenge as many expect.

Robert “Bob” Fioretti has been an alderman for the second ward of Chicago since 2007. Before that, he served as an civil rights attorney involved hundreds of cases, a good portion of which have resulted in federal verdicts. Fioretti helped organize the Chicago program Operation Safe Passage, combining police forces, local churches, and school officials to protect students to and from school from violence in their neighborhoods. There is speculation that Fioretti ran for Mayor because the counsel of aldermen along with the mayor are planning on re-distributing districts on the map of Chicago according to the US census.

No unions have backed the South Side native, but the Green Party of Chicago has publicly endorsed him, saying, “There is this old saying in the Green Party, ‘Neither left nor right, but out in front,’ and Bob Fioretti has consistently been out in front on these issues,” according to the Columbia Chronicle. Fioretti has also served under both Jane Byrne and Harold Washington, but his biggest problem in election is that he has a lack of funding, support, and traction in large communities.

A man who served as Confidential Assistant to former Mayor Harold Washington, Walls prides himself on representing the 99%. Walls, though, has lost two mayoral election campaigns as well as losing City Clerk, Congress, and Governor campaigns.

Walls has never actually held the position of an elected official, and when he falls back on his assistantship to Washington, some of his staff members deny that Walls had an active role in any decisions and did little more than schedule appointments. It should be mentioned that Walls had resigned from his position in the Mayor’s office after a struggle between Mayoral assistants. With the lowest donations, Walls prides himself on being “un-bought” and for the people.

Although Willie Wilson was originally written off, he seems to have a fair amount of support – the same amount as Chicago native Bob Fioretti, and significantly more votes than William “Dock” Walls III. Though the businessman, who has no political experience, ran for mayor in a city that he is not from, he made his millions here. Willie Wilson seems to rely on his voters that can identify with his American dream-style success from farming in Louisiana to owning a few McDonald’s franchises, and then to his own billion-dollar company selling American-made food service gloves with clients including those same McDonald’s (and Wal-Mart).

Although Wilson’s story of success is compelling, it is highlighted by concerns that he does not actually live in the city of Chicago; he has a permanent residency in Hazelwood, and bought an apartment in Chicago before he started running in 2013. More worrying are his plans for Chicago. In most debates he remains vague, and his campaign website is highlighted by biblical euphemisms drawing from his religious community support. Wilson has odd proposals, such as suggesting that Chicago Police Officers ride the CTA instead of being in their patrol cars. This obviously brings up problems like immediate response, and emergency assistance.