SAIC: Where a Credit Hour Costs More Than an Ounce of Gold

The tuition increase has forced some students to wonder whether their needs matter. 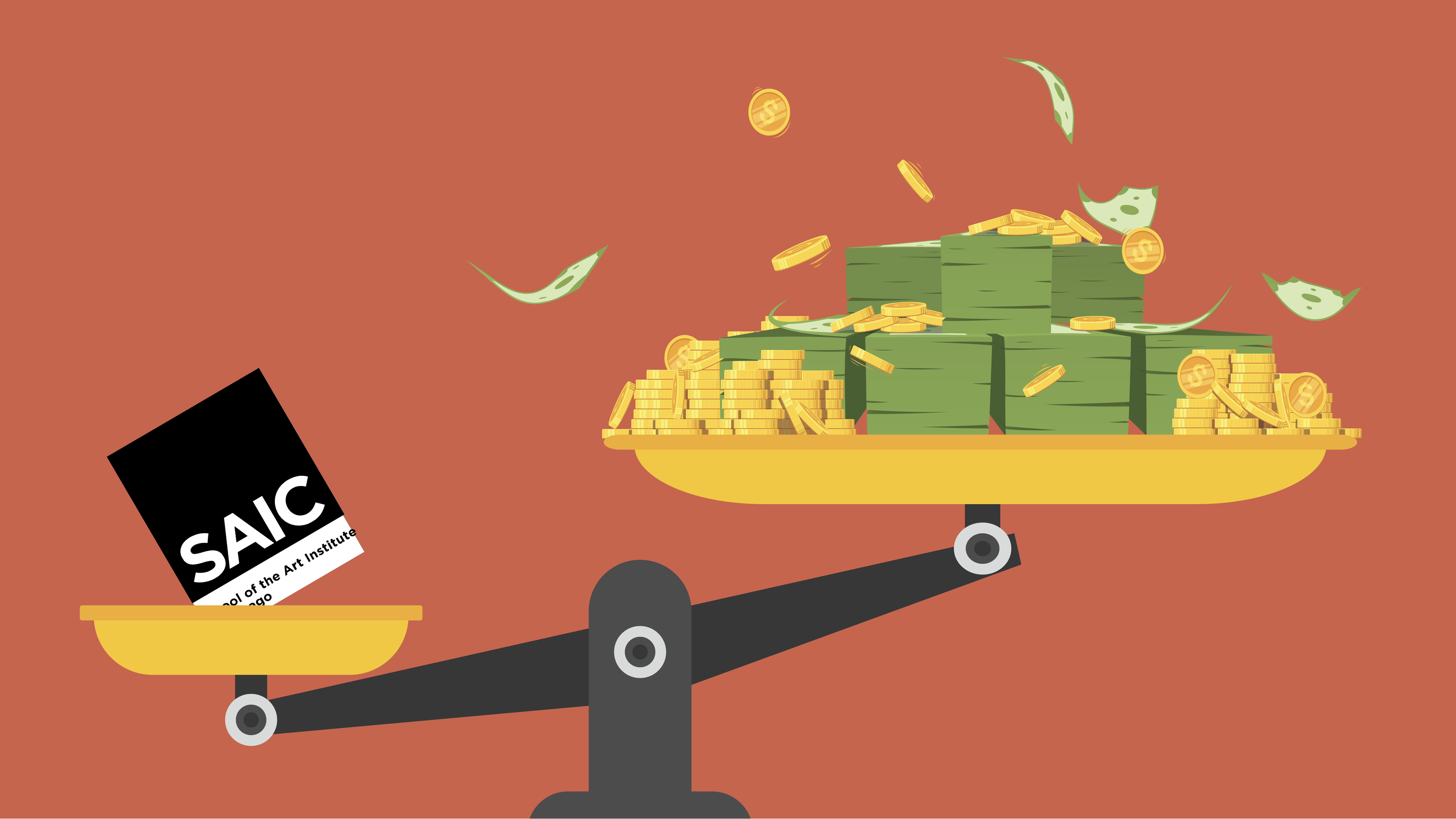 This article is the first in a series on college tuition.

When SAIC tuition increased in 2022-23 for the tenth time in 11 years, the question demands asking. Meanwhile, according to the U.S. Department of Education College Scorecard, within two years of entering loan repayment, 37% of SAIC graduates are not making progress and 2% are in default. That’s nearly 40% of recent graduates.

Rising tuition is not unique to SAIC. According to the National Center for Education Statistics, average tuition and fees at private nonprofit 4-year institutions were 19% higher in 2020-21 than 2010–11. From 1980 to 2020, according to Forbes Advisor, the average cost of an undergraduate degree increased 169%. National trends, however, don’t explain individual schools, and, as SAIC tuition steadily climbs toward $2,000 per credit hour, student response is pointed and sharp.

What are student reactions?

Students responding to two F Newsmagazine polls shared common concerns: Where is the increased revenue going? How does it improve student experience? Some expressed anger, with one student asserting that the impact on low-income families “is actually gross.”

An undergraduate who spoke with F Newsmagazine on the condition of anonymity reduced their semester load to 12 credit hours to help manage costs. Yet, despite scholarships and moving out of the dorms into a cheaper apartment, “I still have to work two jobs because itʼs just expensive.” This studentʼs key concern is simple, “Where is our money going?”

MFA students Oona Taper and Geoffrey Billeter feel the pressure to work more. “Itʼs a weird tradeoff ,” said Taper. “The more expensive, the more guilty you feel if you canʼt devote more time, but the less time youʼre able to devote.” Billeter, who contemplated leaving, asked, “Why do I have to work 45-50 hours a week just to be here, when I should be creating art?

The extreme inequity in what they are willing to invest in students is discouraging.” Taper, like many, wants clarity on how funds are used. “I donʼt really trust the schoolʼs judgment. Paying teachers the proper amount and access to equipment are the things I feel the most confident on.” Jourdain Barton, another second-year MFA student, shared frustrations about employment. “They have us over a barrel. What are we going to do, just stop? Weʼre struggling to find employment at SAIC through an incredibly byzantine process with no guarantee of employment even when awarded work study.”

Why did tuition increase?

“Because we have increased costs running the school, salaries,” said SAIC President Elissa Tenny. “During the pandemic, there were salary cuts for senior leadership and faculty making over a certain amount of money. We had a serious downturn in enrollment and felt we should not raise tuition [in 2021]. Now that this year we are much more recovered, we did give faculty and staff salary increases. So the cost for running the institution has risen.

How does SAIC decide the tuition rate?

According to Alexandra Holt, Executive Vice President for Finance & Administration, two competing factors influence the tuition rate: affordability (both current and future) and increased costs. Tuition, which generates most of SAICʼs revenue, is reviewed each fall for the upcoming fiscal year (starting July 1) by a team that includes finance, admissions, and the provostʼs office. This timing gives current and future students “as much notice as possible,” explained Holt. Based upon this review, Tenny makes a decision subject to school board approval.

The Strategic Plan: What is affordability?

SAICʼs strategic plan prioritizes affordability. Tenny focuses on three areas: scholarships, wellness, and career preparedness in the “Make Way: A Roadmap to Student Access, Equity, and Affordability” strategy used with donors. “The more money we raise for scholarships, the more affordable education is and more people can get access to it,” said Tenny. Wellness means students have “a healthy body and mind, particularly around disability and mental health.” For career preparedness, SAIC “invested a significant amount of resources in CAPX, helping students to find a productive and creative life after art school.”

Tenny, who wants to “ferociously attack” unpaid internships, noted those as an example. “We raise funds so that students, who otherwise would not be able, can afford to take an unpaid internship. Typically students of color and women.”

SAIC does offer funds for students in unpaid or underpaid internships; however, to qualify, students must enroll in an internship course (and, therefore, pay tuition). When pressed on that curious arrangement, Tenny responded, “I think itʼs connected to scholarships, quite frankly. So the only way to rectify it is to continue to try to lower tuition.”

In follow-up correspondence, Tenny justified the course tuition based upon the support and feedback it provides and noted that SAIC is exploring how students can access these resources and opportunities outside of class enrollment.

As another solution for affordability, SAIC dropped the number of credits undergraduates need to graduate. Tenny noted, “When we were at 132, [undergraduates] couldnʼt complete the degree in four years without taking summer and a January course.” Yet, when students must work 20+ hours/week to attend SAIC, doesnʼt that impact their ability to complete schoolwork? Is reducing credits a bandaid?

“The way I want to tackle it is through raising funds,” repeated Tenny. “Thatʼs the best way that we can [address costs] and try to be very judicious as we think about tuition increases.”

What are SAICʼs financial resources for scholarships?

Scholarships come from three main sources: 1) restricted funds, 2) direct annual gifts, and 3) unrestricted funds. Restricted funds and gift s are governed by donor agreements (and support other programs like faculty positions), which limits how the school can use those. “We pull about 4.5% off the endowment every year to pay for scholarships, faculty positions, etc.,” says Holt. When drawing from the endowment, SAIC balances its current needs with growth of principal for future income.

“When an endowment increases in value, folks will ask why raise tuition instead of spending out of the endowment,” said Glenn T. Colby, Senior Research Officer with American Association of University Professors (AAUP). “Itʼs important to understand when  funds are restricted.” Because restricted funds are limited by the donor, said Colby, “Institutions cannot throw it into the pot. Others argue you have to do that when times are tough, but there are differences of opinion on what an institution can do.” Although restricted funds “are sometimes necessary to do great projects,” said Colby, there is good news. “In the last year or two, unrestricted giving has skyrocketed. People recognize institutions are hurting.”

If SAICʼs answer is fundraising, what are those goals?

The Make Way Strategy, noted above, is a four-year, $25 million campaign that ends in June 2024. “I work closely with the development team on getting into the weeds of who our donor base is and what interests that our donors have,” said Tenny, who is confident they will reach this goal.

It is unclear what benchmarks are set for each prong (scholarships, wellness, and career preparedness) under the $25 million campaign. Tenny emphasized SAICʼs need to remain flexible to donor interests in reaching the end goal of the institution. Still, in cultivating scholarship funds, Tenny responded, “Thatʼs mostly what I spend my time on lunches and dinners and cocktails doing.” She maintained that the development team has persuaded donors to give specifically for scholarships.

What about the schoolʼs costs?

In budgeting, “each department must bring in and justify expenses every other year,” explained Holt. A specialty firm audits facility usage to consider where academic space can be provided while shrinking administrative space. As Tenny noted, SAIC previously (but temporarily) cut salaries of higher paid employees. For another current strategy to curb costs, see the article on changes to the class schedule. The school has not used an outside firm to audit its efficiency beyond facilities. “Not to my knowledge. Not in my dozen years here,” noted Tenny. “We have not had an external efficiency expert review.” AAUP can do this type of work, particularly to “dig through financials and uncover problems,” but itʼs “an incredibly complicated process,” said Colby.

What is the solution?

Analysis of SAICʼs efforts to keep tuition affordable involves nuanced questions, particularly with a growing endowment and active fundraising. Is an efficiency audit enough? Do donors fully understand studentsʼ economic struggles? Are there goals to reduce tuition, not just raise more money to cover rising tuition, like a puppy chasing its tail?

For Barton, the solution is a radical institutional wide shift . “Why isnʼt the Institute leading the world in being a training ground for the next generation of artists?” she asked. “The museum needs to fund my education, because my education gives that museum a reason to exist.”

Colby says students and faculty can advocate for strong fiscal management. He encouraged questions, offering several starting points: “Whatʼs happening with enrollment? Revenue? Expenditures? Whatʼs going on with the endowment? What kind of debt does the institution have?” Although Colby observed that SAIC has not reported any debt in IPEDS, accordingto Holt, “there is $150 million worth of long-term debt right now, $51 million of which is directly related to the school.” Colby also encouraged folks to “ask the faculty senate what their involvement is [in decisions like these].”

Increasing tuition may not be resolved solely through fundraising eff orts or department-level cost cutting without transparent communication that proactively reshapes the institution, inside and out. Otherwise, argues Barton, the harm may not be limited to students: “The real loser is the city of Chicago and its cultural heritage, especially if students begin fleeing.”

John W. Bateman (MFAW 2023) has a secret addiction to glitter and, contrary to his Mississippi roots, does NOT like sweet tea. Aft er nearly 20 years in philanthropy, he left his Southern unicorn lumberjack shack and moved to Chicago.

Featured, SAIC SAIC: Where a Credit Hour Costs More Than an Ounce of Gold
« Previous Story

Strange Literary Magazines That You Should Submit To