Reflecting on Polaroid’s a520, a Fiend and a Family Camera

Did you know that Polaroid makes digital point & shoot cameras? Because I didn’t. 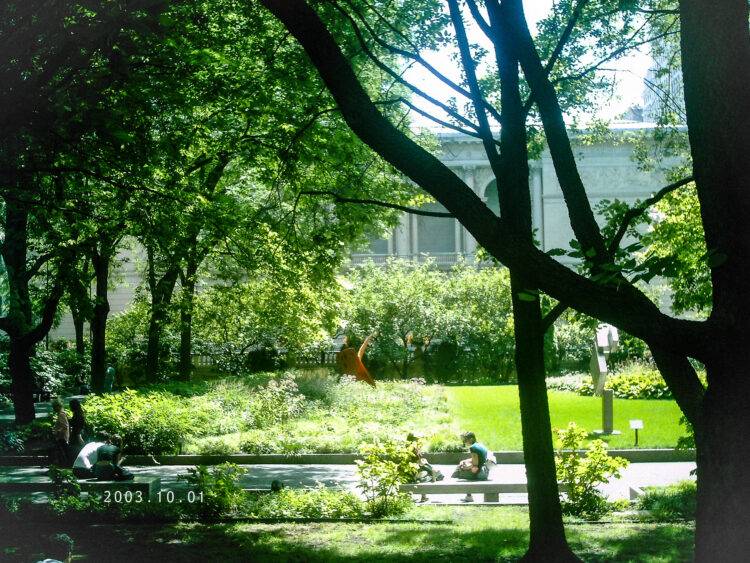 The north garden at the Art Institute of Chicago, as shot on a Polaroid a520 digital camera. Photo by the author.

From my mom’s dresser drawer bursts out this tiny pocket camera: a Polaroid a520 digital point & shoot, and this thing looks like it’s on its deathbed. The plastic casing has taken a couple blows to the front, and it can’t stand being alive for more than five minutes. I had to scavenge the kitchen junk drawer to find a couple spare triple A batteries (because who uses batteries anymore?). The SD card slot will hold any SD card, but the camera really doesn’t like storing photos on anything larger than 2GB so I just kept the original SD in there.

It’s my first week of school at SAIC and I’ve been dying to get some city photography of The Loop, but where’s the fun in using the latest standard camera technology? I’ve been craving to play around with old digital technology, and I think I’ve abused my Canon Rebel T7 enough this year in Chicago’s mosh pits and garage shows. I need some fresh tools in my hands, because digital photography is starting to grow stale. Maybe it’s because I haven’t been going anywhere interesting with my camera recently, or maybe I haven’t been appreciating my equipment as much as I should be. This point & shoot camera was the perfect tool to help kick me back into the medium. 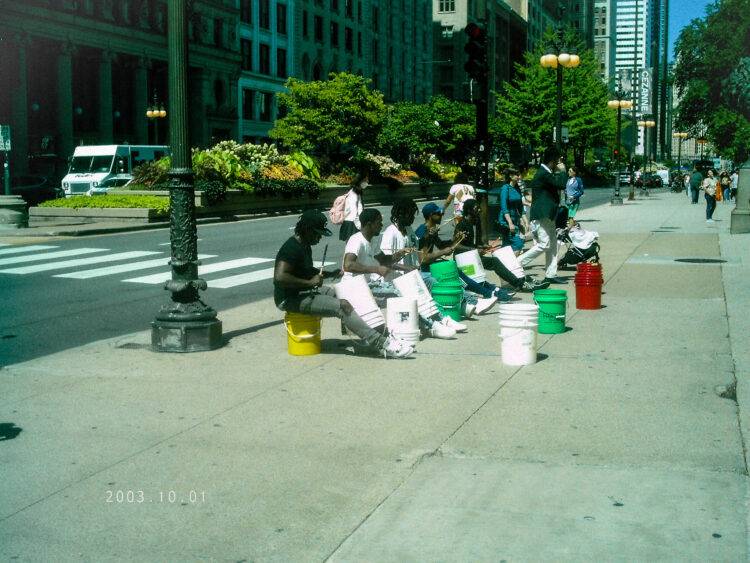 A drum line in front of the Art Institute of Chicago. Photo by the author.

You can tell this camera is a little too old to still be functioning. Occasionally, the camera will seize and completely shut off mid-shot. It’s willing to corrupt any and every SD card it gets its hands on. I think it has dementia; no matter how many times you remind it, this Polaroid is forever in firm belief that it is still Oct. 1, 2003. It’s scratched from head to toe, but the build feels sturdy. The Polaroid a520 could probably withstand an express trip down the stairs at Mach 10 and it would still be ready for the next photo.

Polaroid was the last company name I had on my digital camera bucket list, in part because I didn’t actually know they made a digital camera. From the 1940s to the 1980s, the company was best known for developing film technology that could produce a photograph seconds after being shot. Polaroid’s selling point was instantaneous film, which makes it all the more questionable why Polaroid made a digital camera.

Polaroid began to experience a sharp decline in sales as cheaper instant disposable film cameras soared. It also didn’t help that the first digital cameras were stepping into the market. Polaroid faded heading into the 2000s; they filed for bankruptcy in 2001. Polaroid then began moving into the digital market and closing all of their film manufacturing industries.

The Polaroid a520 was one of those digital cameras, developed in 2006. It does the job adequately, and substitutes its lack of quality with an abundance of personality. The Polaroid a520 is limited in its manual functions — the whole camera is practically on auto-pilot with no way to toggle the aperture or shutter speed. You get an aperture range of 2.8-8.0, and the shutter speed is toggled accordingly. The camera only focuses center, and has a really hard time reading objects that are close to the lens. 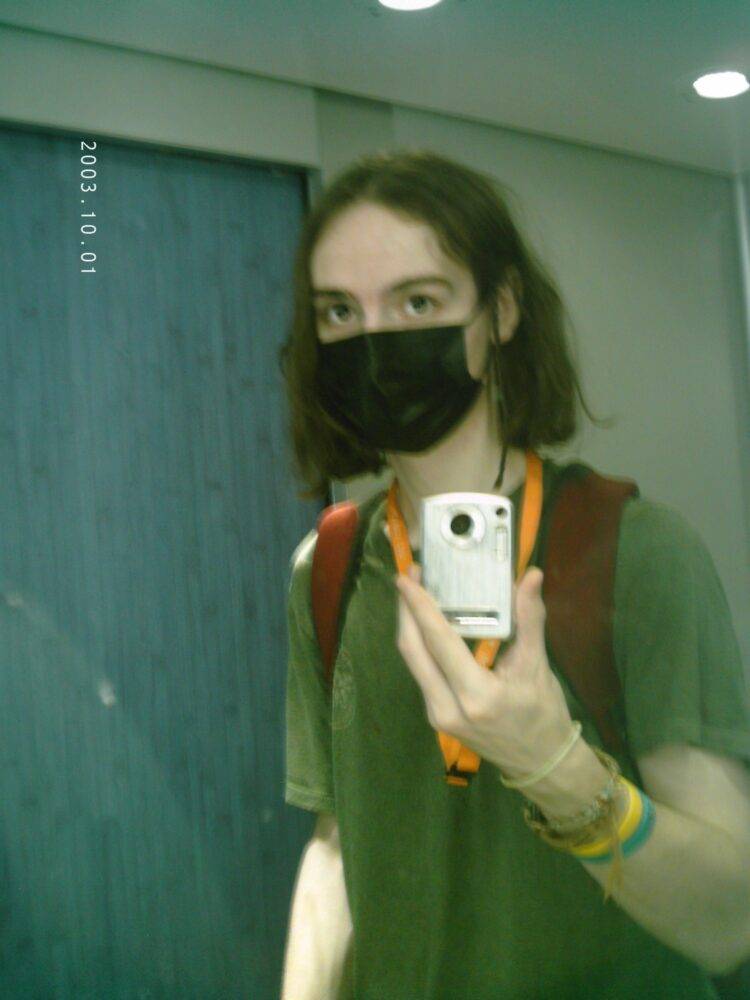 Self-portrait of the author.

You do still have the ability to shift the exposure up and down. But as a Polaroid is to function, it’s an instant picture with no need to adjust. You also have the ability to change the white balance, but it’s not like it has all that much of an effect on color correction. I had to edit the photos shown here in Lightroom because they were either far too warm or cool (they still are).

The Polaroid a520 shoots and displays images at an astounding resolution of just 5.0 megapixels using a 1.125in. sensor. It’s about 5 times smaller than my Canon Rebel T7, which shoots at 24.1 megapixels. Still, the Polaroid a520 is just as powerful taking still photos compared to your average present day laptop webcam shooting video. The resolution is toggleable, so if for some reason you feel like shooting at 0.3 megapixels, there is an option to do that. What about shooting video? Haha… anyways…

As far as memory goes the camera has 16MB of internal storage, which holds maybe three photos total. You’ll have to purchase a 1GB SD card, because apparently the camera can’t read anymore than that. There’s also a “quality” setting? As if the resolution setting doesn’t exist or something. And honestly there’s no noticeable difference in image quality for me between low, medium, and high. 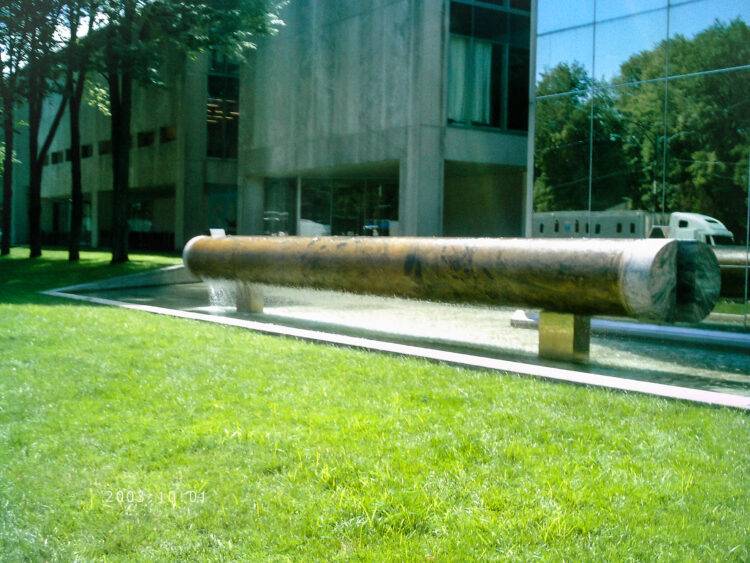 Exterior of the 280 Building. Photo courtesy of the author.

My edition of the Polaroid a520 throws temper tantrums, corrupting some of my best shots and shutting off at the worst of times. Nothing like performing percussive maintenance on outdated technology in the middle of The Chicago Loop. Maybe this Polaroid is just tired of being abused by its users. Tired of being shoved in pockets and bags, being left on trains and buses. Tired of the constantly flickering temperatures of air conditioned bedroom homes and sweltering trips to Texas.

It’s lived & served its lifetime. Maybe it just wants to retire and cash in its pension. 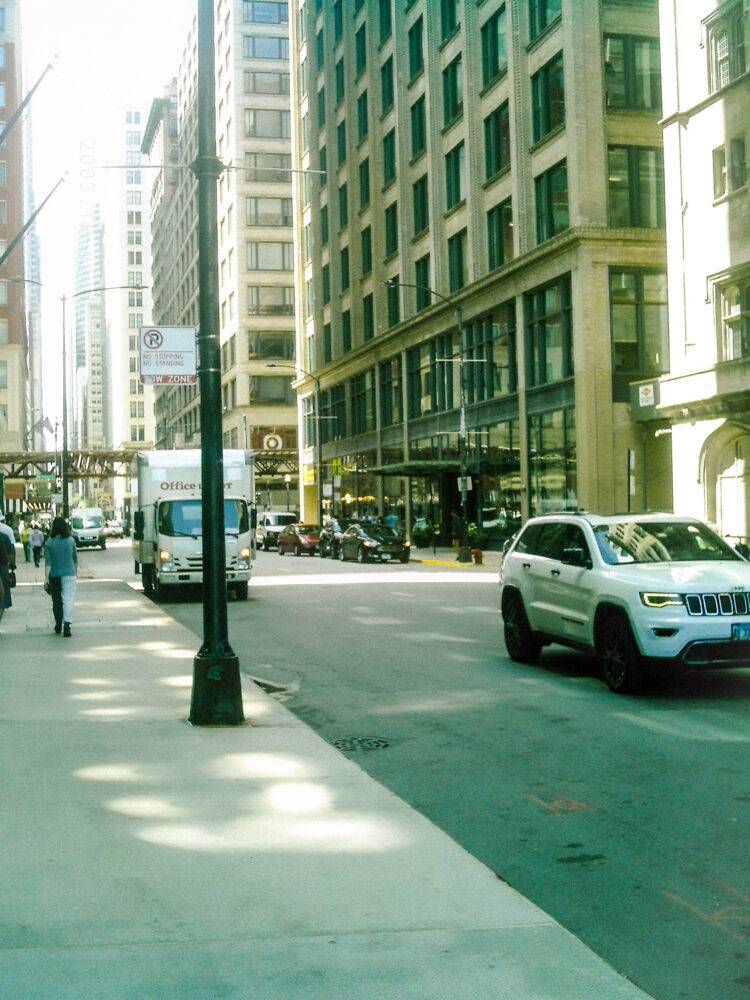 The view from East Monroe St. in the Loop. Photo by the author.

One of the downsides of this camera is the digital zoom. There’s no movement of the lens, instead the camera opts to just crop inward leading to some pretty poor quality shots. Best not to touch it and just get closer yourself. This is also the first camera I’ve ever used (other than my phone) that does not actually have a viewfinder. Instead you have to observe through a two inch LCD display. At least it displays a “Goodbye” message when you shut it off though!

There is a flash, but the Polaroid a520 doesn’t seem to like it when you use it. Every now and then you’ll get a very unwanted glare from your flash, and I think it might be a cause of the camera’s auto exposure setting. You have to go into your settings and manually turn down the exposure to reduce the glare or otherwise be in a poorly lit area that will allow the flash to shine a little bit better (if it even lights up the area at all). 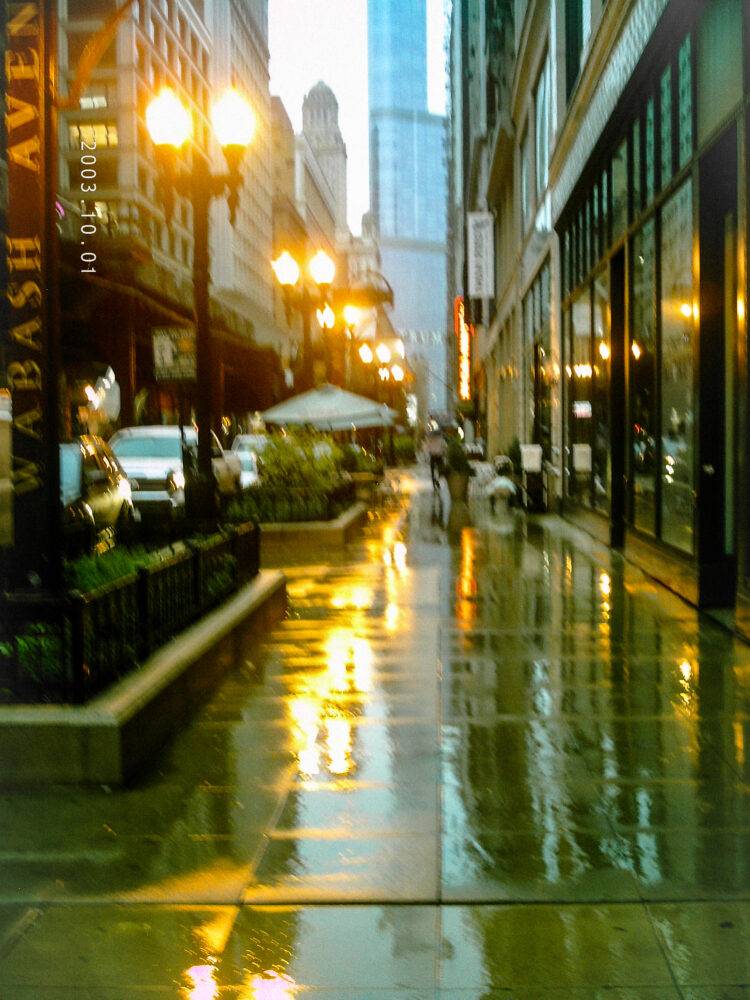 A rain-soaked South Wabash Ave. as seen through the Polaroid a520. Photo by the author.

Pristine Instagram quality shots have quickly lost their charm since I first started digital photography. A photo is worth more than the content on the page. To be able to experiment with older equipment is an inexpensive wonder that allows an artist like myself to appreciate the strides in technology we’ve made regarding the craft. I want to see the pixels in the photo to remind me that behind every photo is a process beyond just the click of a button.

These photos aren’t really about me, nor my ability to take photos; it’s about the camera itself and appreciating the beauty of just average, bare-bones, general-purpose equipment. That’s something I don’t appreciate enough. The low-budget, unexceptional picture quality of a family camera isn’t something to pass up on. A family camera isn’t meant to look pretty, it’s not meant to be your primary tool, and it’s not meant to put you in a famous gallery or publication. A family camera is carried simply to document life and allow us to relive the past.

There is no downside, nor upside to the Polaroid a520; it simply is.

Arts & Culture, Featured Reflecting on Polaroid’s a520, a Fiend and a Family Camera
« Previous Story

Dreams of Black and Blue: Ian Mwesiga at Mariane...