Panicking Over The Pedals: A Day with Liminal Space

Something’s cooking in Chicago’s experimental music scene, and Liminal Space is sitting right in the middle. 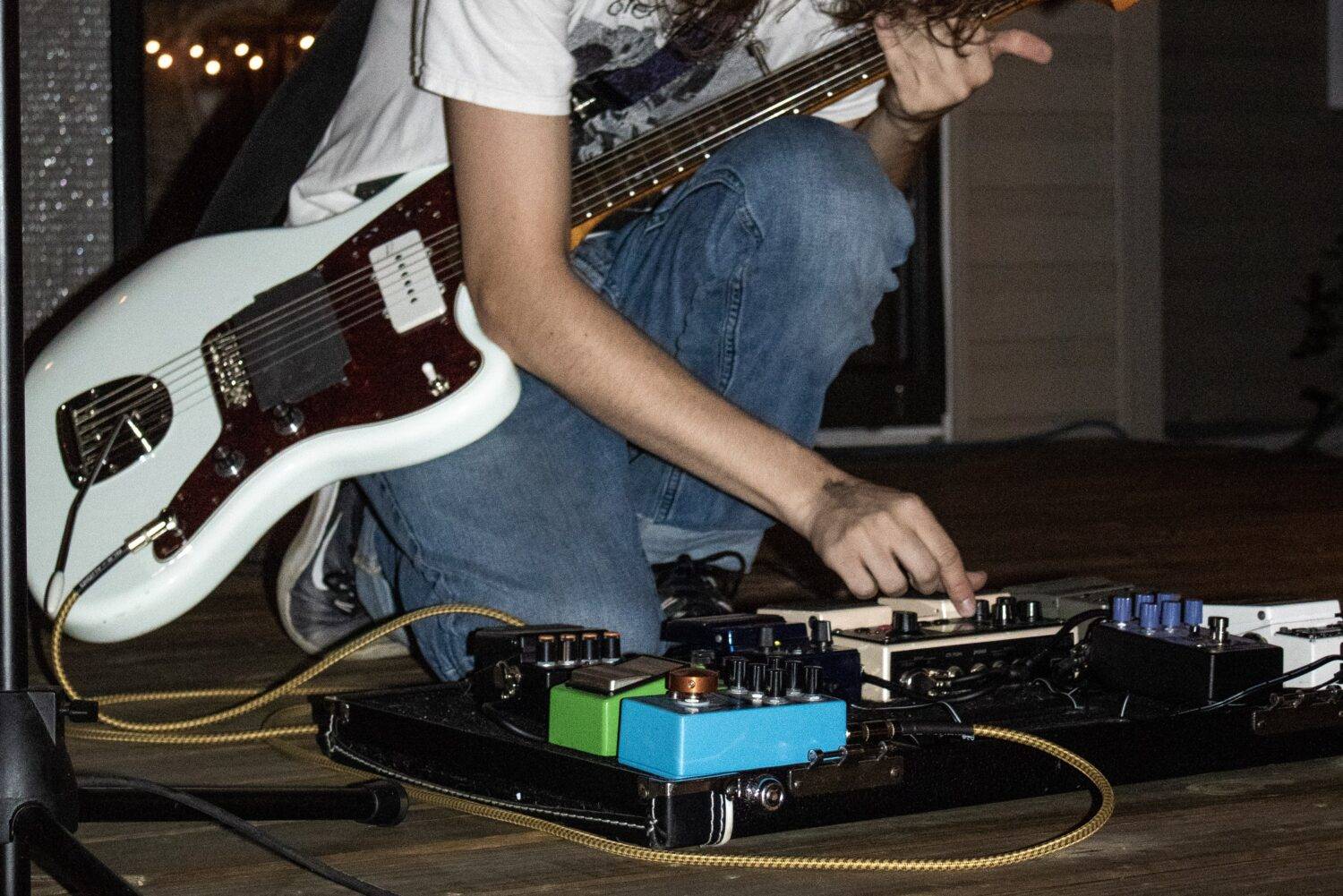 Dylan Sidun of Liminal Voice fine-tunes his effects pedals for a show. Courtesy of the author.

July 16th, 2022. 9:31 p.m. It’s the beginning of the last performance at Darkroom, a small suburban backyard venue in Elgin, Illinois. The crowd is starting to simmer down, and slowly they begin to disperse after the band The Grow Ops had just blown out the venue’s only pair of speakers. Just as the host begins to light a tiny fire pit in the center of the yard, a small group of partygoers begin encircling the glass picnic table beside the entrance. It’s been converted into a merch booth where another group, Doublespeak, is selling a pack of t-shirts they made with fabric markers not thirty minutes before the doors opened. Clime, who kicked off the show at 7 p.m., is peeling out of the driveway, leaving a microphone in the venue’s possession by accident.

The backyard has nearly cleared with only a handful of people on their phones waiting on the last act in the lineup. Someone is leaning on the fence finishing up the half-way point of a scarf they had been knitting the entire show. The members of the small trio Liminal Space, the closing act, are getting antsy while The Grow Ops continue to occupy the stage despite their set time going past the limit. Nevertheless, a backup speaker is hooked up to the sound system to ensure the final performance kicks off without a hitch.

“You guys better be good, I’m tripping balls right now,” says a man loitering around the front of the stage with a beer in his hand. 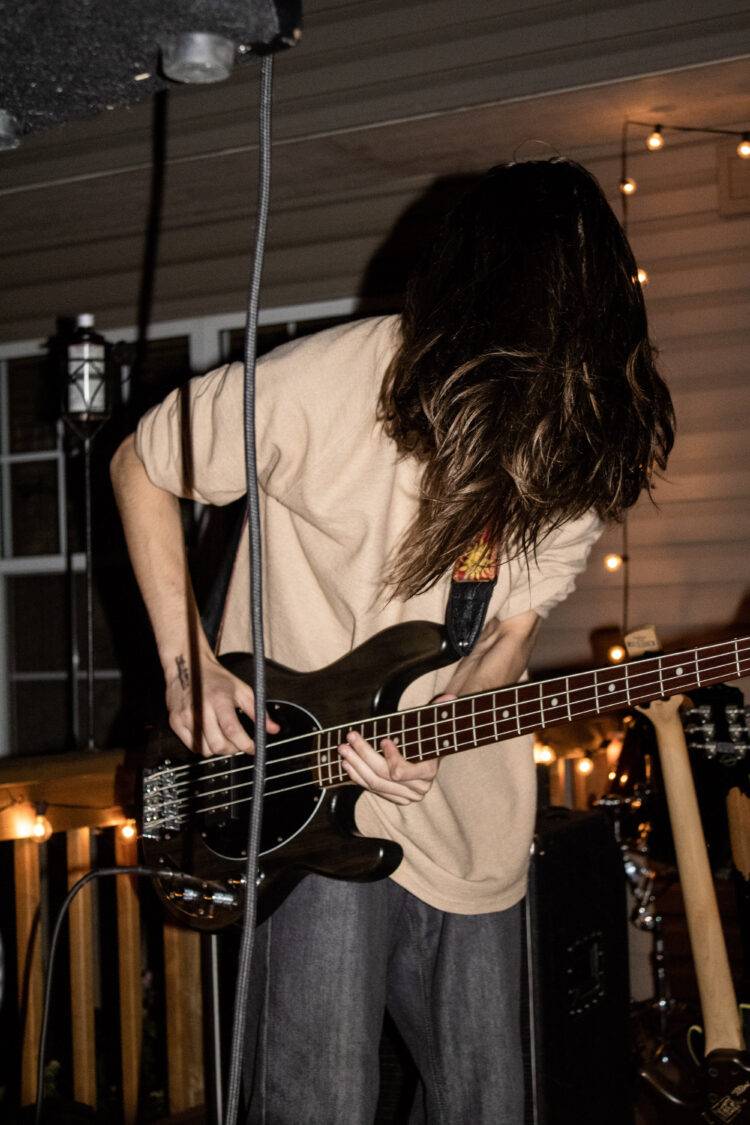 Amos Lungu of Liminal Space caught in the moment. Courtesy of the author.

July 16th, 2022. 9:45 p.m. There’s a groan from the speaker that drags everyone’s attention back to the stage as Amos Lungu, the bassist of Liminal Space, slams the amp with a guttural note. Their hair drapes down the front of their head like the onryō from the Japanese-American horror film “The Grudge.” Meanwhile Naser Mansour, the drummer, is still setting up what he calls his “trash stack”: a trash lid sitting on top of an upside-down crash cymbal. It’s Dylan Sidun, the guitarist/vocalist with a little bit of a sore throat, who stammers over the microphone:

“Yeah this isn’t gonna work, we need all of y’all to scooch over to the front.”

Their first impression to the audience is a little underestimating, with an ear-shattering amount of volume emanating from the band’s Sunn amplifier. It’s just a bunch of noise. Sidun selects one of the two guitars he has on set, but Mansour has just finished setting up his playing field after wrestling with the carpet beneath the drum kit for a hot minute. And when the band is all set, Mansour is the first member to jumpstart the show with a rapid succession of tight snare raps and a couple of splashes from a closed hi-hat. Trust me when I say that this self-described “Chicago Loud Group” gets even louder inside the studio. 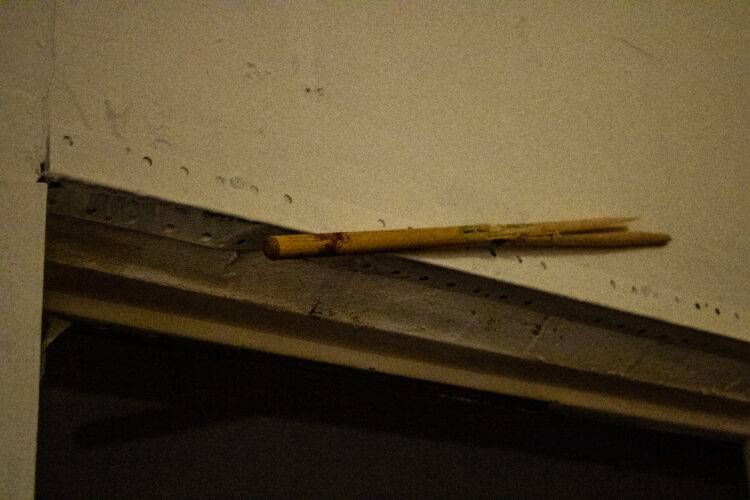 At Liminal Space’s rehearsal studio, a “wall-mounted clock.” Courtesy of the author.

July 16th, 2022. 1:13 p.m. Sidun only brought a browned banana and some water to the practice location in the lower east side of Bridgeport. It’s a multi-story brick building adjacent to empty overgrown lots and abandoned/burned housing. The building reeks of mildew. Fortunately, the band has been able to scrummage up just enough money to make rent and prevent their mothers’ ears from shattering by practicing at home. The production studio looks more like a storage closet than anything else. It’s all Liminal Space really needs to kickstart their careers as musicians.

The studio comes with two wall mounted lamps, a landlord-special paint job, and a pull-cord switch light bulb that has only ever been tugged once: when I asked to take photos in the space. LED strips litter the walls, but they haven’t been touched in a while. There’s almost no soundproofing; actually, I lied there is a torn piece of foam on the door, but when I asked Sidun about it Lungu claimed that it came with the space. Somebody, most likely Mansour, nailed the butt-end of a snapped drumstick to the top of the door. It seems to have blood on it upon closer inspection.

Loading begins at six, so the band has maybe four hours to kill before the hour-and-a-half long drive through Chicago rush hour traffic. Sidun is sporting a white “Duster / Stratosphere” t-shirt with blue cuffed jeans and middle school-dated gym shoes (he uses them to mow the lawn). Lungu’s head is covered by a red beanie with some strands of hair they pulled out from underneath. They’re dressed in dark loose-fit jeans and a brown long-sleeve shirt despite the room reaching a suffocating ninety degrees Fahrenheit. Mansour already has his shirt and boots off by the time I’ve entered the shoebox studio. No shirt, no shoes, all service. This trio seems to leave you wondering the same question every time you lock eyes with one of them: how can one human being be this abnormally sweaty? 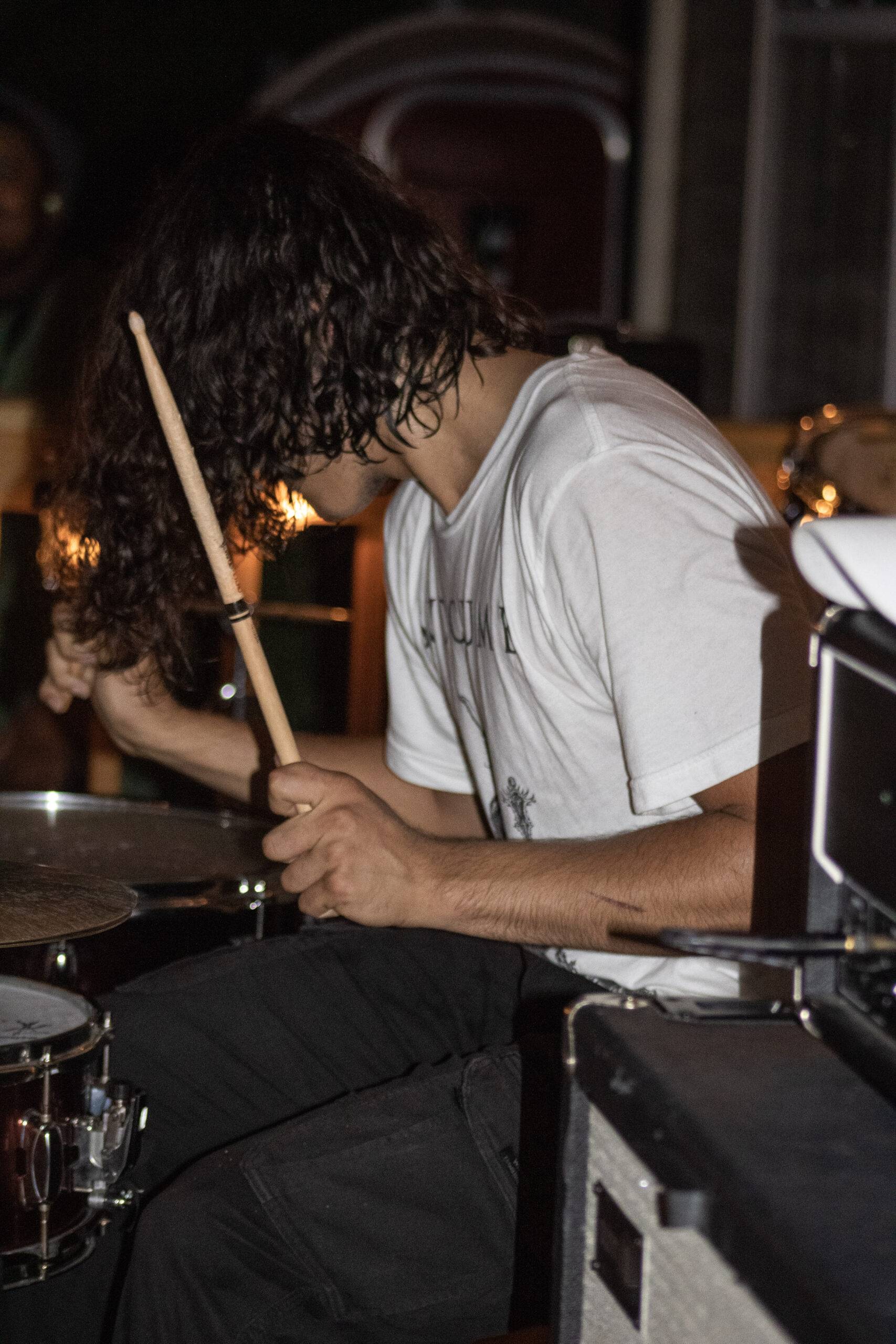 Mansour mid-set at the Darkroom. Courtesy of the author.

There’s an interesting communication that happens between Sidun, Lungu, and Mansour. Each player watches another, awaiting their next move, and there’s the slightest hesitation between all three just to see if they’re on the same plane. Mansour leads his own charge with a murderous intent that nudges Sidun to occasionally ask him to slow down. Lungu doesn’t really speak during these sessions, only chiming in for a slight joke every now and then. There’s no leading figure to this team; every member seems to share an equal amount of weight.

Lungu and Sidun have set up a number of guitar pedals on the floor linking to different effects and pre-recorded sounds. The emotional adrenaline-inducing instrumentals are juxtaposed by intermittent sounds of nonsense voices as the band begins its slow descent into a mental prison of their making.

Imagine the televised Emergency Alert Sound System made a band. Now imagine they’re playing in a vacated and unfurnished office building. Each song interconnects another, progressively becoming more distorted and jaded. An endless audio experience pulling you away from reality.

When you’re standing in the audience of their performance, the space starts to morph into the band’s personal playground, and your surroundings begin to feel detached as you sink deeper into their music. Liminal Space achieves derealization, and it’s not an effect you can ever achieve sitting at home listening to their voice-memo-recorded demo on Spotify. Liminal Space is one-hundred percent best experienced live.

July 16th, 2022. 9:58 p.m. The musicians that have come together to form the group Liminal Space live up to their name as they turn this townhouse backyard in Elgin, IL into a setting of their own. I think this is my first time experiencing music that doesn’t actually move a crowd — and not in a bad way. Throughout the whole thirty minutes of playtime there wasn’t a person moshing, dancing, or even just bobbing their head. It was all just people, staring. They were in their own little world as I jumped on and off the stage capturing photos and footage for the band.

Coming into the climax of the show, the noise they produce slowly becomes more incomprehensible. There’s a story in this performance of mental health and anguish. I don’t really even know what genre to call this band anymore after seeing them live. Perhaps it’s not really a genre, maybe Liminal Space is just venting in their own awkward yet unique way. I asked Sidun later about the lyrics he shrieked over the microphone. Apparently, it’s mostly improvised.

“We don’t have lyrics, I just scream into the microphone whatever I’m angry about at that time.” 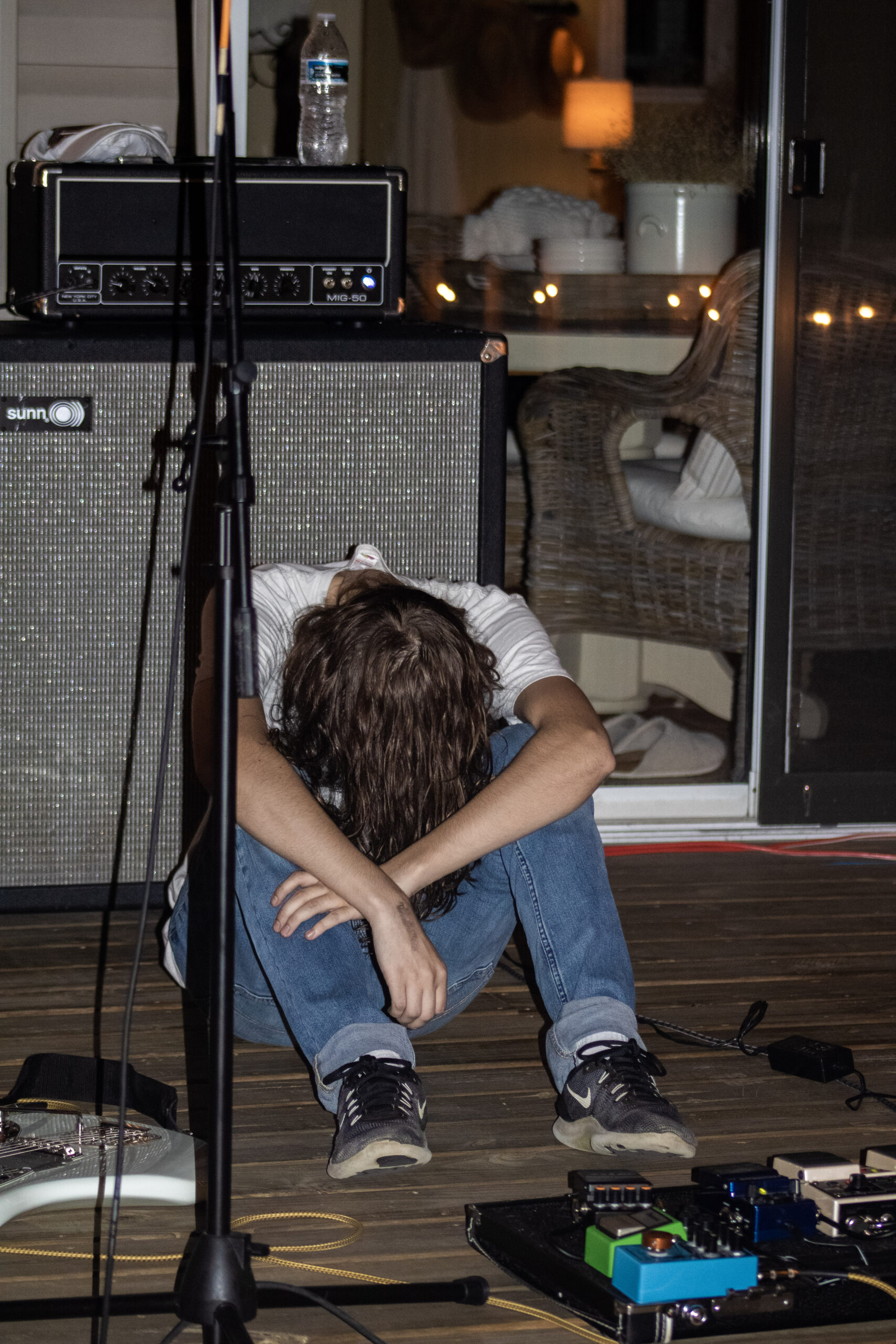 Sidun takes a breather during their Darkroom show. Courtesy of the author.

July 16th, 2022. 10:31 p.m. It’s the end of the show, and Sidun is curled into a ball on the side of the stage, unable to bear the music they’ve created. Mansour is fumbling angrily over the drums, and Lungu is full force beating the shit out of his guitar pedal with his right hand; he left with a swollen pinky at the end of the show.

Then, the music stops, and you’re just standing there with a party of other enchanted wallflowers realizing that this trio of sweaty twenty-year-olds just created something extraordinary. Liminal Space is a mental health crisis in action, one that really leaves you asking yourself:

“What the fuck guys- Are you okay?”

Liminal Space is on break for the month of August, but is planning new shows for the beginning of September. Follow their Instagram for show updates and releases @liminalspaceband. Keep your eyes peeled for their upcoming album scheduled to be announced this August. Inquiries and booking done via email [email protected]

It’s DJ (BFAW 2024.) They make pretty pictures, but sometimes write nifty articles, narratives, and poems. He’s also a graphic artist for “White Noise Magazine.” You can browse their photography shenanigans @iss.green on Instagram. Inquire via email [email protected] or shoot me a DM on my socials. When’s the last time you properly flossed?

The Song Remains the Same: David Hockney’s ‘Arrival of...