If there’s one thing Billy Eichner never is, it’s quiet. 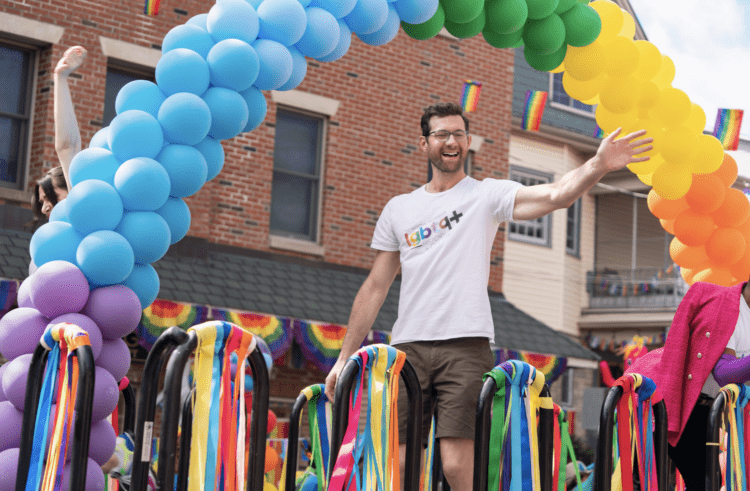 Still from “Bros,” courtesy of Universal.

Billy Eichner is a comedian you either love or hate. You either binge “Billy on the Street” clips until you’re crying, watching him scream at random New Yorkers, some of whom scream back. Or you find him a little bit too much because of the register of his voice, his brashness, or, maybe, you imagine yourself in the shoes of the many people he harangues, and you wonder if you would fare any better under the diamond-shattering pressure.

Personally? I’m in the first camp. I find a lot of joy in Billy ramping up the intensity to 11 with the most mundane of questions and playing the most inane of games. It may be hard to tell amidst the yelling, but there’s more to Billy’s comedy than simply volume. Billy is both a great improviser and hilarious interviewer: he knows exactly how to prod and poke these busy New Yorkers to get their weirdest possible answers, without ever missing a beat. Even the little monologues he delivers at the start of each segment pack in a joke almost every two seconds. “Billy on the Street” is a masterclass of improvisation, in rolling with the punches, because the real people are always so much odder than Billy is prepared for.

When it was announced several years ago that Billy Eichner would be writing and starring in his own romantic comedy, “Bros,” I was wondering whether that same improvisational quality would make it into the script, if Billy would be able to sustain the vibrating energy of Billy on the Street for two hours. That’s far longer than an episode of Billy on the Street or his work on the beloved sitcom “Difficult People.”

The plot of “Bros” is pretty simple: a curmudgeonly podcaster is convinced he’ll never find love until, surprise surprise, he does. Then like all rom-coms, it rises up, it falls down, and eventually there’s a grand gesture and things fall into place. We’ve become accustomed to the formula. What we’re not used to is seeing that plot play out on screen with an LGBTQ+ cast. That was part of the appeal of  “Bros:” For the first time ever, a major romantic comedy release features a gay principal cast. It’s a pretty meaningful act of representation that does not settle for tokenism, which more and more seems to be the path of movie studios that want to appear as allies.

The movie does not stop at casting: it also wants to be queer in its content. And not a facile, simple queerness that sells t-shirts at Target. The script is very keen on having its audience leave knowing more than when they came in. For example, twice the film comments on Stonewall, pointing out how in history, the gay cis-men have taken the credit, erasing the presence of trans people and queer POC at the momentous riot. There is a clear attempt at educating its audience that sometimes feels earned and in line with Billy’s character, Bobby, who is a bit of a snob in his politics, but at other times, a little patronizing, aligning us closer to the people who find Bobby too loud.

Loudness is also a key theme of the movie. Because loudness is how you make your mark in a world that wants to pretend you’re not there. It’s how you defy your own erasure. It’s how you refuse to back down against people who do not accept you as you are. But it isn’t as simple as loving yourself.We see how Bobby’s loudness gets in his own way, hurting some of the people around him despite his intentions. But the thing is we still understand where that lashing out comes from. That’s more than we can say about the emotionally cut-off male leads of many a romantic comedy. It’s a cornerstone of the film’s themes, encapsulated in a single monologue from Bobby, delivered from a lawn chair on the beach as he explains why he has to be confident. It’s a tender, moving moment that Billy Eichner delivers with honesty and gravitas. It almost feels like a reflection from Billy Eichner on the character he plays in “Billy on the Street which has brought him such success: an unabashed, unfiltered, slightly exaggerated version of himself. A version of himself that isn’t afraid to be loud.

It almost feels like that same self-reflexivity bleeds into “Bros,” which though funny for its first hour, neglects most of its comedy as its plot develops. That’s the natural pace of the romantic comedy: as the stakes rise, as the break-up feels imminent, screenwriters veer away from the jokes to keep the audience in their feelings. But the jokes fade away far before that in “Bros.” It makes sense considering how the movie is, in some ways, a historic achievement for queer people and wants to grapple with that legacy beyond being a plain old rom-com. But that doesn’t mean the jokes have to go away.

Most of the best jokes in “Bros” are about the infighting within the queer community, its idiosyncrasies, its lampooning of both monogamy and polyamory, with the same self-effacing, irreverent tone of “Billy on the Street.” In particular, Guy Branum, Jim Rash, and Miss Lawrence do an excellent job matching Billy’s signature timing while adding their own flavor to the mix. There are also some very Billy moments, like when Bobby attempts to escape a club but his retreat is foiled by too many voguers. The jokes have more than pure entertainment value: they act as sugar cubes to ameliorate Bobby’s bitter truths. When the jokes become less frequent, the film’s educational attempts start to feel more condescending than enlightening.

It’s clear with “Bros” that Billy Eichner is stretching his wings. Gone is the handheld wired mic and the improvised asides. He’s scripting, with a pretty clever story that actually lands its big romantic gesture at its ending. And though it has its bumps, it’s undeniably a movie made with heart. It’s cheeky, it’s gross, and it’s sincere in its depiction of the many complications and joys  of being gay in a mostly tolerant community. Billy Eichner may not be yelling into the mic. But that doesn’t mean he’s any less loud.