Are apps the answer? Find out in a new Luma’s World comic — Dating Dilemmas. 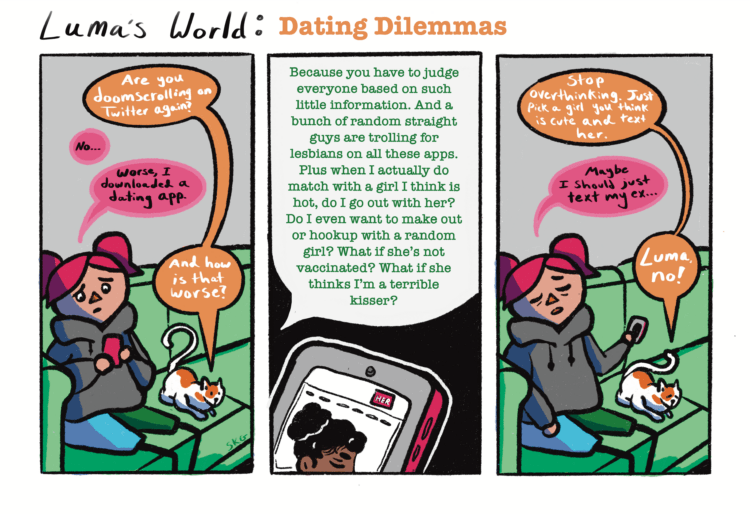 Panel 1:  Luma, a young woman with bright pink hair, sits on her couch scrolling on her phone. Her calico cat sits beside her. The cat asks, “Are you doomscrolling on Twitter again?” Luma replies “No….worse, I downloaded a dating app.” The cat asks Luma, “How is that worse?”
Panel 2: Cut to a close up of Luma’s phone. The phone filled up the bottom third of the screen and shows that Luma is on a lesbian dating app. The rest of the panel is filled with a large speech bubble of Luma’s worries. Luma explains to her cat why downloading a dating app. “Because you have to judge everyone based on such little information. And a bunch of random straight guys are trolling for lesbians on all these apps. Plus when I actually do match with a girl I think is hot, do I actually go out and see her? Do I want to make out with a random girl? What if she’s not vaccinated? What if she thinks I’m a terrible kisser?.”
Panel 3: Luma is sitting beside the cat again on their couch. Her eyes are now closed, and she’s holding her phone away from her. The cat tells her, “Stop overthinking. Just pick a girl you think is cute and text her.” Luma is defeated. She says, “Maybe, I’ll just text my ex.” With one last bit of advice, the cat yells “Luma, no!”
Like