A passionate plea for you to taste the SAIC Oktoberfest burger before it’s gone. 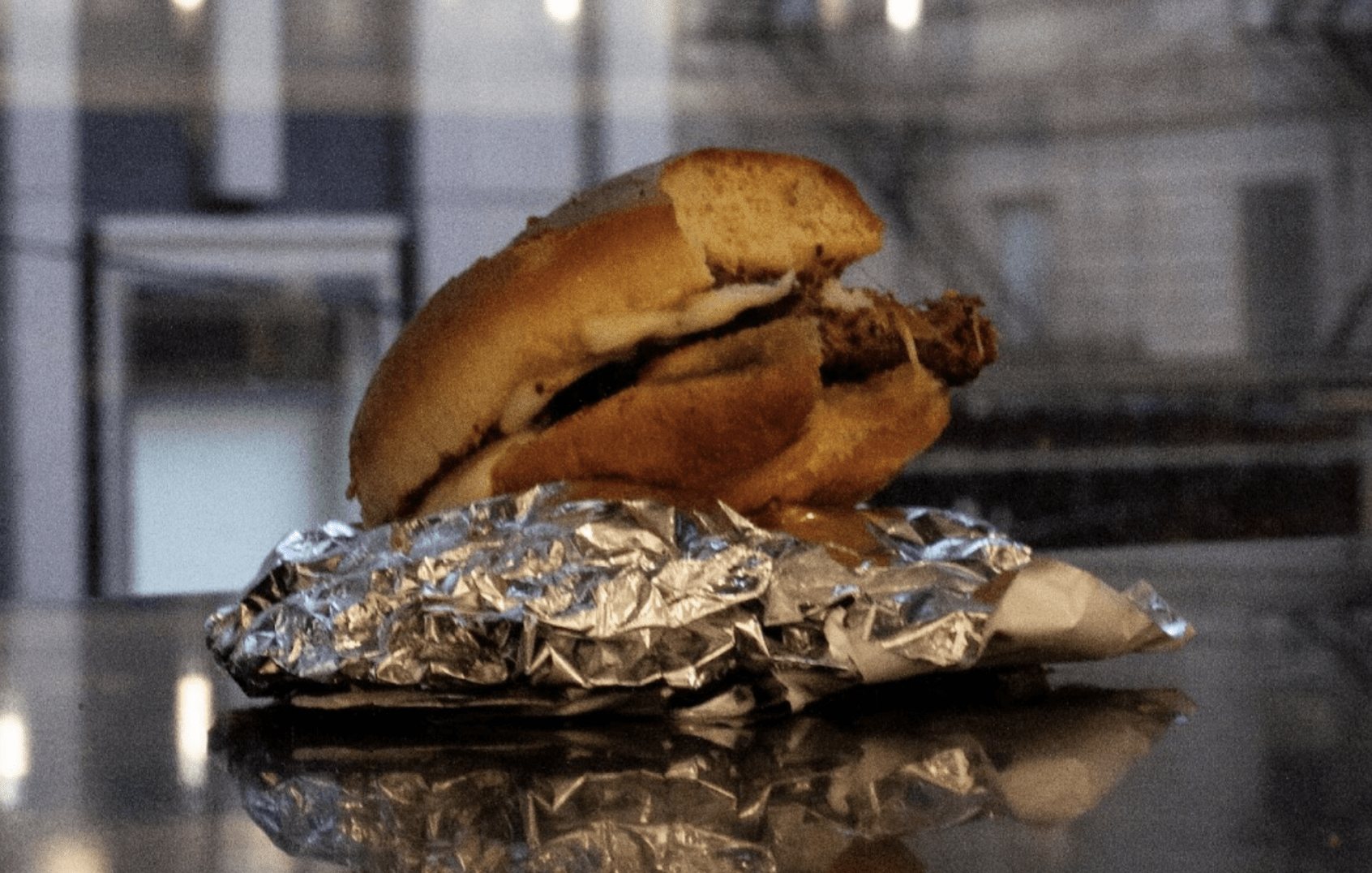 The Guten Tag sandwich in all its glory. Photo by Teddie Bernard.

“Guten Tag” is a German phrase used as a greeting, roughly translating to “Good Day/Morning/Afternoon.” It’s one of those phrases you learn in the first week of German 101. Simple, to the point. Guten tag.

Guten Tag is also the name of a sandwich offered at Food for Thought, SAIC’s three cafeterias. It is a sandwich that I have spent twelve months tirelessly describing to my peers, and it is now — for a limited time only — available again for purchase as a seasonable menu item.

The Guten Tag is the kind of sandwich you write epic poems about. While eating the sandwich, there are moments of glorious, beautiful triumph and moments of lows so deep you feel trapped in a canyon of sorrow. I have not stopped thinking about the Guten Tag sandwich since I first tasted it in September of 2021.

“Well, was it good?” my friends have asked when I tell them about this sandwich. The Guten Tag is not the kind of sandwich you can categorize in such simple adjectives as “good” or “bad.” The Guten Tag rejects your mortal terms, your easy labels.

The Guten Tag was not a pleasant experience, but equally, it was one of the best sandwiches I have ever had in my life.

An Oktoberfest item offered in mid-September, the Guten Tag immediately caught my eye, first, for its incredible name and, second, for its promise of a pretzel bun. This sounds like a regular burger, I thought, with a pretzel bun. So I took my food slip and ordered this very special sandwich.

I had no idea how special the Guten Tag would be or the amount of space it would come to occupy in my mind. I have considered odes, perhaps paintings, even a knitted recreation to pay tribute to this sandwich. Ultimately, I decided none of these mediums could truly recreate the experience of eating the Guten Tag. It is something that must be experienced as it is.

I went back for the Guten Tag a few weeks later, but it was gone. That was the end of it. I shrugged my shoulders and went about my life, pretending as though I hadn’t had an experience that had shattered my reality — showed me some sort of life beyond the matrix.

When I saw it was back on the menu, I knew I had to have it again. And I knew I had to document the experience and share the word of the Guten Tag with the student population at large.

Here is that review:

I arrived at Sharp cafeteria’s Food for Thought cafe just after 6 p.m., hungry and eager. I grabbed my food slip and eagerly circled the Guten Tag. (It’s worth noting for those interested in copying my endeavor that the Guten Tag is not with the burgers, despite its main protein being a hamburger patty. Instead, it can be found on the other side of the food slip, in between the “Tecate Wrap” and “Salsa Roja Black Bean Tacos.”)

On the food slip, the Guten Tag is described thus:

This was exactly how I remembered being served it one year ago. To my dismay, however, I saw the lone cook that evening adding whole grain mustard to a regular hamburger bun. This is it, I thought. It’s done. Sharp cafeteria has been known to, on occasion, substitute regular buns when they don’t have the specialty kind. I knew the sandwich would still be a journey, but would it really still be the Guten Tag? I found dread slowly building in my stomach. Despite all this, I admired the cook’s ability to make three sandwiches at once, and I took the Guten Tag from them when it was finished with nervous trepidation.

While checking out, the person working at the cash register informed me that they had only added the button for the Guten Tag earlier that day. I thought about telling them how special this sandwich was, but instead wished them the very thing the sandwich promised to me: a good day. The sandwich cost $8.50.

Biting into the Guten Tag, the first thing I was hit with was the heat of the burger patty, still fresh off the grill. The first few bites were pleasant, slowly becoming accumulated to a hint of mustard and the tender taste of the Muenster cheese. Though I had been worried about the lack of a pretzel bun, I was immediately having an excellent time eating the sandwich. The dread I had been feeling upon holding the aesthetically unimpressive burger in my hands faded into a kind of bliss, a state of peaceful meditation.

As I enjoyed the sandwich, I felt my brain racing fast. Yes, yes, I had enjoyed the Guten Tag the last time I had it. But this felt… different. Were there no canyons of sorrow waiting for my arrival? Was the sandwich less of a journey and more of a seasonally themed lunch or dinner item, just to be mildly enjoyed and forgotten until the next year? Surely not!

But oh, the onions. They brought me back to reality, assured me that this sandwich had much more in store for me. The onions had been heated on the grill but still had the irregularity of many cafeteria onions. Some bites, they were a nice addition, mixing well with both savory and sweet undertones. Some bites, they were devastating snakes, betraying my mouth with too much crunch and an awful, slimy feeling.

The rollercoaster of the Guten Tag had reached me yet again. Unlike last time, I was prepared for it. The hamburger bun, the tangy mustard, the crispy patty, even the onions, all worked together to create an unexpectedly tasty experience.

Near the end of the sandwich, I realized that despite it all, despite my hours of obsession, my hopes and my dreams, my worries and my fears, despite every one of the things that had brought me to this moment, I was hungry and, boy, was this sandwich hitting the spot.

The Guten Tag will not be for everybody. But, a fairly enjoyable seasonal treat that it is, I hope that I may have convinced some of you that it is an experience you must have before it’s taken off the menu.

The Guten Tag can be found in all three cafeterias. It will be taken off the menu at the end of the month. After that, all we’ll be left with is our memories, trying to cling to the aftertaste of flavor, as we dream and obsess about the Guten Tag for the rest of the year.