Book Review: Flung Out of Space

How Patricia Highsmith’s complicated legacy is explored through comics. 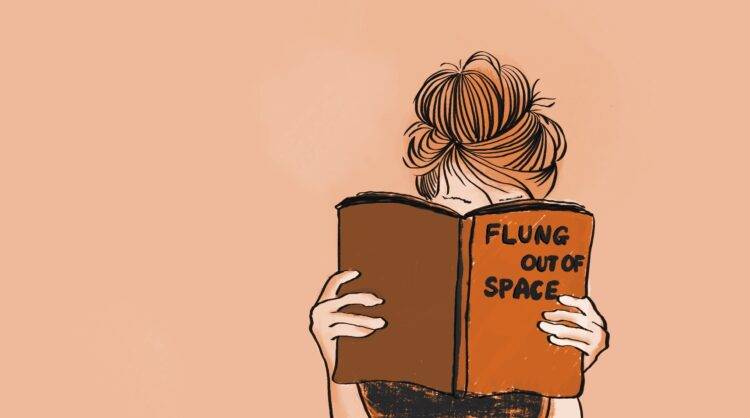 “Flung Out of Space” is inspired by the real life of author Patricia Highsmith, known as the suspense/crime writer responsible for titles such as “The Talented Mr. Ripley” and “Strangers on a Train.” Highsmith’s catalog includes one categorically “different” novel — “The Price of Salt” (1952), later retitled as “Carol.” “The Price of Salt” is widely discussed as the first published novel with a good or happy ending for the protagonists of the lesbian romance, because the pair end up together and neither are killed off. The legacy of this novel is still discussed today, especially with films such as “Carol” (2015) that bring the story to a new generation of queer viewers. Although “The Price of Salt” is the singular lesbian romance in Highsmith’s catalog, the impact of her novel on queer culture and consciousness can’t be understated.

“Flung Out of Space” (2022), then, leads the reader through the tumbling tale of Patricia “Pat” Highsmith around the time she wrote “The Price of Salt.” Highsmith starts as a writer of comic books, desperate to get out of the business, calling the content of the comics she’s writing “not even B-movies.” She spends her nights working on her suspense novels as soon as she gets home. Meanwhile, Pat is also struggling with her same-sex attraction in 1950s America, an era infamously not great for being LGBTQ+. After a series of failed dates, Pat’s own self-hatred and bigotry lead her to pursue conversion therapy. However, when she takes on a retail job to help pay for conversion therapy, a series of events transpire that lead her to write a romance novel where two women end up together. This book would go on to become “The Price of Salt.”

The events in “Flung Out of Space” are not an exact biography of Highsmith. Author Grace Ellis notes in the foreword: “This is a fictionalized, narrative version of a true story. I think of it as the version you would tell around a campfire. The timeline is condensed, the conversations are imaged, some of the characters are composites of multiple real people, but the most interesting facts and events are true.”

The foreword brings up one other important point: Patricia Highsmith was not a great person. She was bigoted, mean, and hurtful to her core. The book does not let Highsmith off for her views. In the opening, Ellis condemns Highsmith’s views and speaks on how representing them is not an action she enjoyed taking but one she found important for understanding the complex person Highsmith was.

If one of the goals of Ellis and Templar’s portrayal of Highsmith is to share a complex view of her character and legacy, it succeeds. Pat comes across as downright nasty in many scenes, but when she catches a glimpse of a woman she’s interested in and their eyes meet across the room, there’s a thrill, a desperate hope that this time things will work out. The events in the graphic novel that lead Pat to write “The Price of Salt” — a love affair cut short by a husband who found out, her own “failure” in conversion therapy to “become” heterosexual, and a stunning woman asking her for help to buy a doll at her retail job — accentuate this the most. It’s all of the things she can’t have that lead her to imagine the story. Pat’s words and actions can be deeply hurtful, ranging from bullying her coworkers to uncomfortable displays of her antisemitism. But when she writes the book of the story she can’t live herself, it’s exhilarating to see her find a publisher willing to bring “The Price of Salt” to life. It’s the dissonance between those aspects of Pat’s story that put the complications of her legacy on full display.

“Flung Out of Space” uses comics to the medium’s strengths. Perhaps most enticing is the visual depiction of writing. When Pat is writing comic books, bubbly cloud shapes surround her, filled with bright orange Ben-Day dots and superheroes in cheesy capes. But when Pat is writing her own novels, the pages fill with a dark cloud, white cutouts giving us a sense of the action as she works through the events in “Strangers on a Train.” Artist Hannah Templar is able to have both the “comic book writing” and “novel writing” styles stand out from each other while tying back to the primary art style the graphic novel is drawn in.

Although comics are used well as the medium of storytelling, there’s something ironic about cataloging a character inspired by Patricia Highsmith through a comic book. It’s the kind of commemoration that it seems Highsmith would be offended by — at least the version of Highsmith shown in the novel, who frequently complains about comics being a low art. However, it’s perhaps within the fact that Highsmith would’ve detested the medium of choice that the medium truly shines. It is not a book about holding Highsmith up on a pedestal as a hero, but about showing the story of a woman who was deeply conflicted, bigoted at her core, and yet contributed some incredibly meaningful pieces of literature to the cannon. Pat is thrilling, disturbing, charming, deeply unpleasant, all at once. “Flung Out of Space” gives us room to detest her at her worst and admire her at her best.

Loving the Monster: Out of the Coffin and Out...