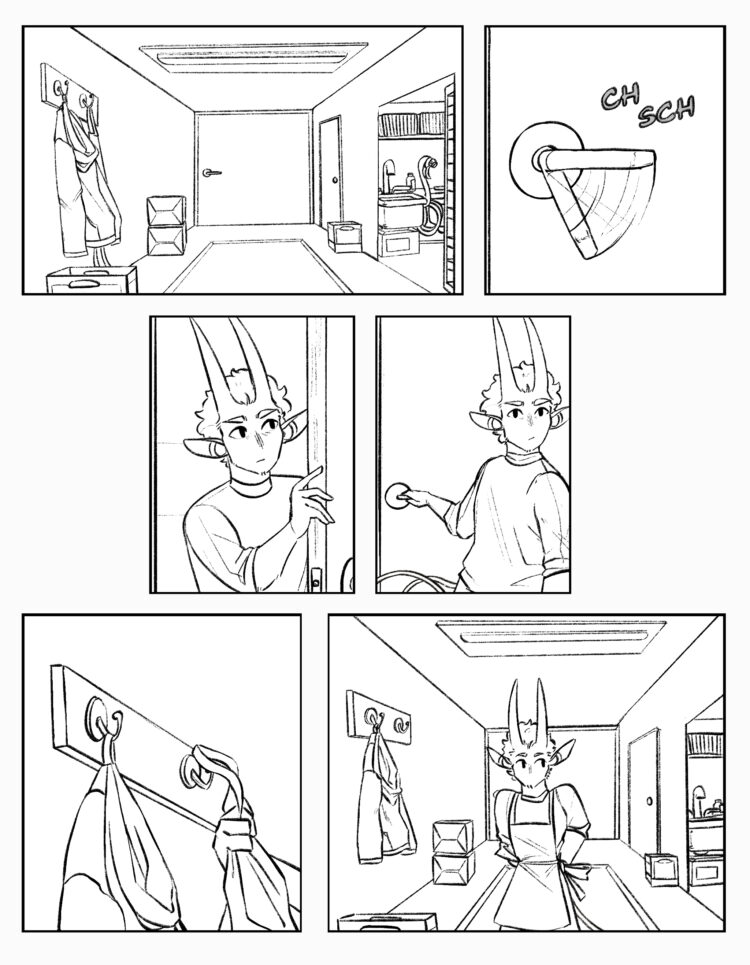 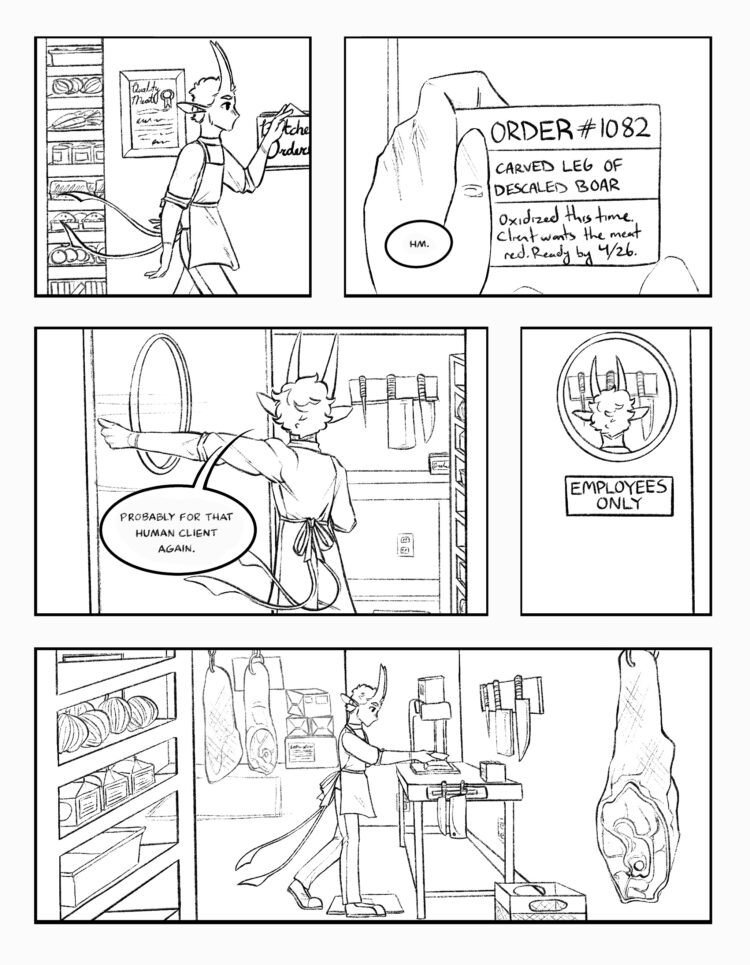 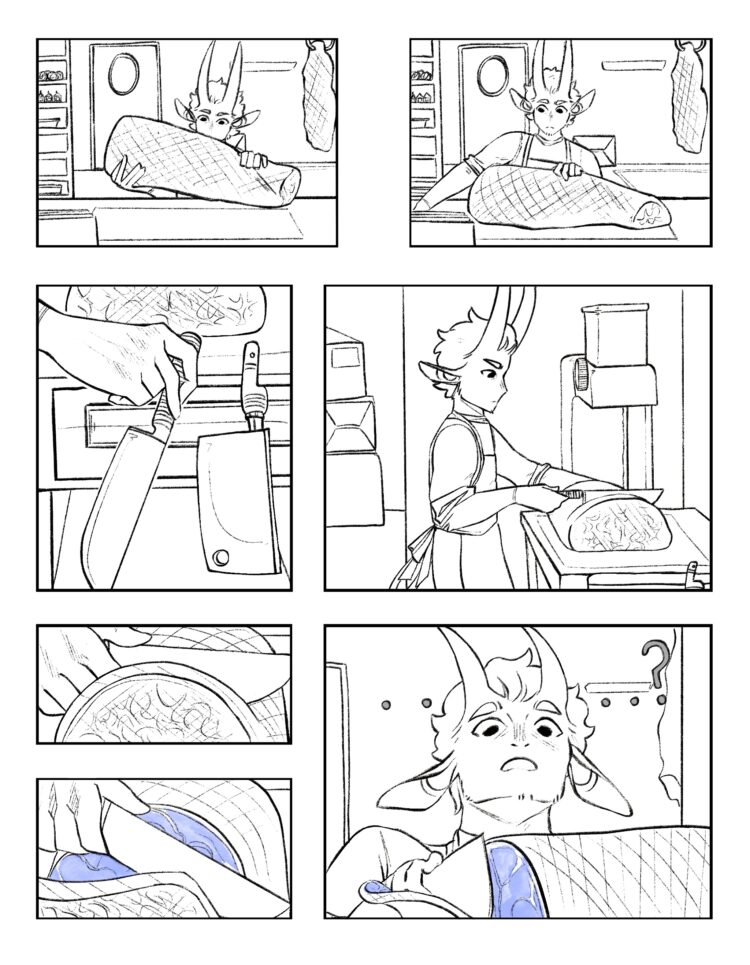 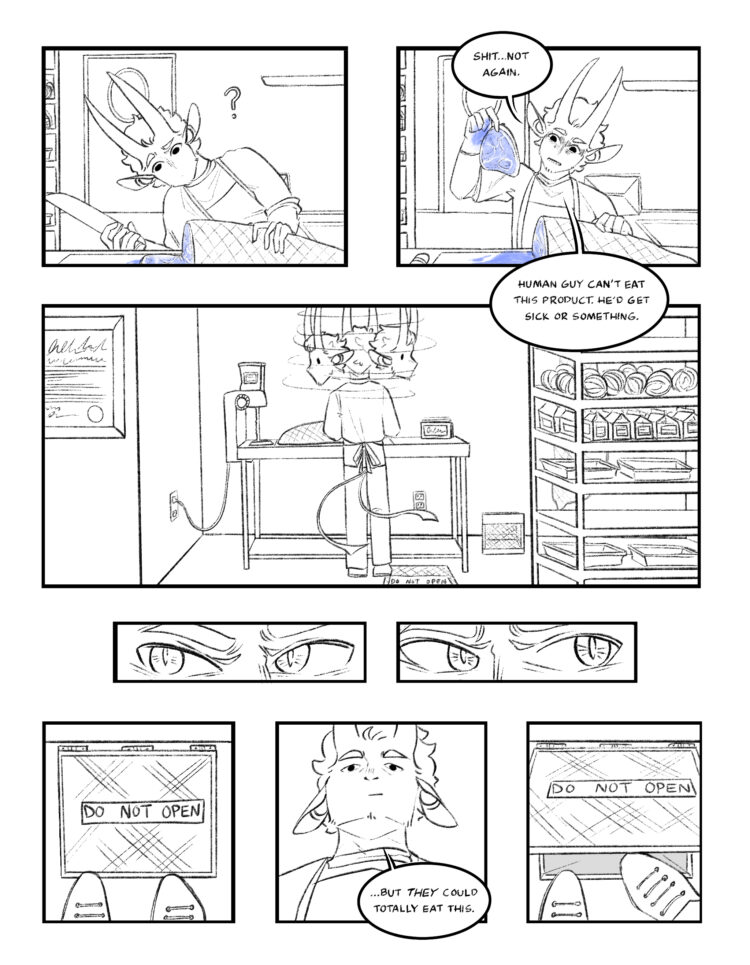 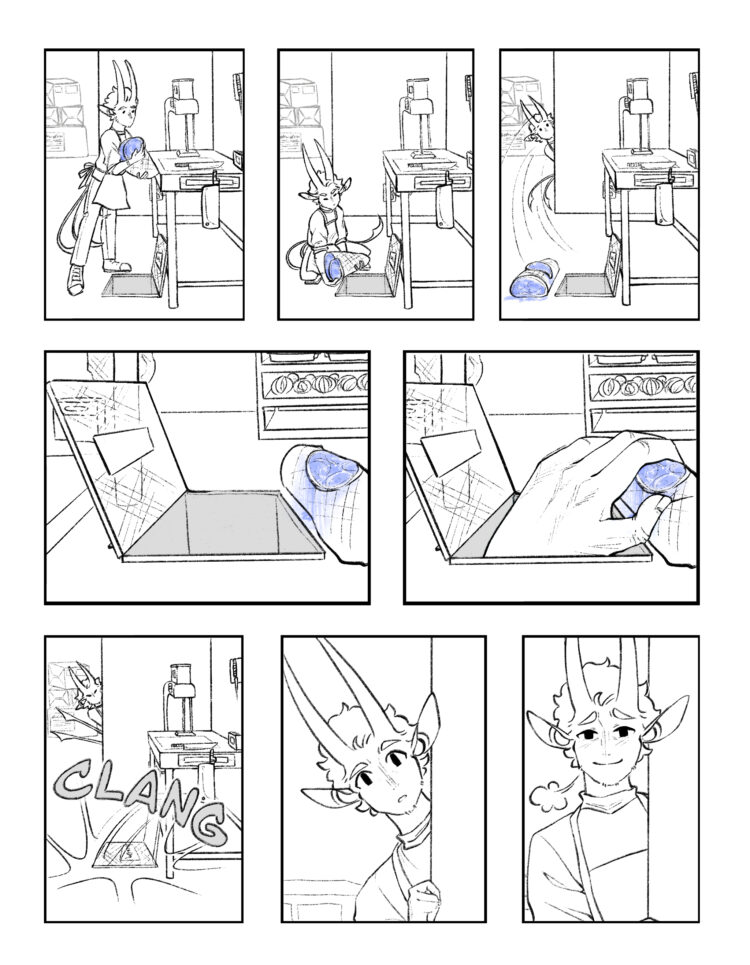 The back hallway of a store appears nearly empty—except for a few crates, cardboard boxes, and a sweatshirt and apron hanging from wall-mounted hooks. A soft “ch-sch” sound is made as the door at the very end of the hallway opens. A humanoid demon with long horns gingerly opens the door and closes it behind him. The demon has long horns that go straight up, a buzzcut that’s grown in an inch or two, and two tails that trail behind him. He takes the apron off the hook and ties it around his waist.

He walks past a tall cart containing various fruits, vegetables, cans, and baked goods to grab a slip of paper from a wall-mounted box that reads “Butcher Orders” on it in cursive. Mounted on the wall next to the order box is a framed award that reads “Quality Meats” with a ribbon under the glass. The slip of paper pulled from the box reads “Order #1082- Carved leg of descaled boar. Oxidized this time. Client wants the meat red. Ready by 4/26” to which the demon responds “Hm. Probably for that human client again.” As he opens a door to a room with a work table and knives hanging from the wall. When the door closes behind him, it reads Employees Only.

More of the butcher room is revealed as he puts the order slip into a small box on the work table. Large slabs of meat are suspended from the ceiling by hooks, crates and boxes on the floor, and miscellaneous cartons and fruit stacked on the shelves. Additional knives are stuck to their magnetic strip on the right side of the table, and an electric saw for cutting through bone is mounted on the opposite side. The demon sets down a large slab of meat on a piece of deli parchment, takes a knife from the side of the table, and begins cutting through the meat. However, the inside of the meat appears almost cobalt blue in color. He stares at it for a moment in disbelief.

Upon further inspection, he lifts up a slice of the meat and mutters “Shit…not again. Human guy can’t eat this product. He’d get sick or something.” He looks around the room carefully- making sure no one else is present- before glancing down at a vent grate at his feet labeled DO NOT OPEN. “…But they could totally eat this,” he says under his breath, and props open the vent with the tip of his shoe.

He lifts the slab of meat from the table and sets it in front of the open vent, and immediately

dashes behind a corner to watch from afar. A large hand grabs the slab, and slams the vent grate with a loud “CLANG!” The butcher demon gazes in wonder at the vent grate for a moment, and then breathes out a relieved sigh.

Baby We Are Snowdrops