In Ray Bradbury’s “Fahrenheit 451,” books are outlawed and are burned by “firemen.” But this isn’t just the stuff of fiction. 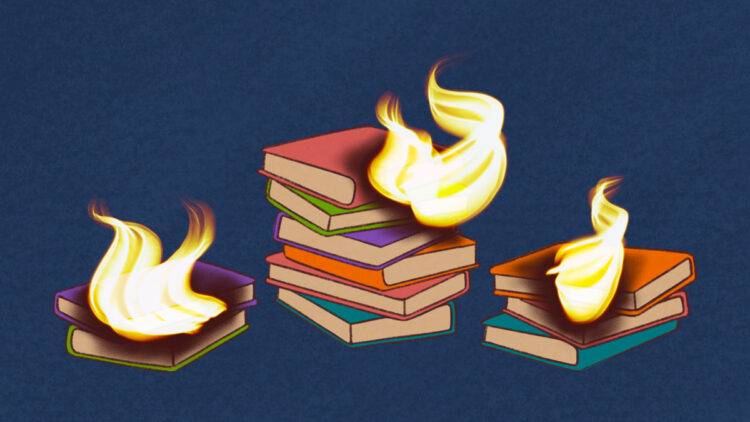 In Ray Bradbury’s “Fahrenheit 451,” books are outlawed and are burned by “firemen.” But this isn’t just the stuff of fiction.

Why is anyone so threatened by a book? Toni Morrison (whose first novel “The Bluest Eye” was recently banned by the school district in Wentzville, Missouri) called efforts to ban “Huckleberry Finn” (a book that initially enraged her) as “a purist, yet elementary kind of censorship designed to appease adults rather than educate children.” Even Fahrenheit 451, an ongoing best seller published in 1953, has ironically (but perhaps not unexpectedly) faced censorship as well.

It’s not just school districts banning books, either. Earlier this year, Gene McGee, Mayor of Ridgeland, Mississippi, refused to release funds to the city’s public library. According to a report by local NBC affiliate WLBT, this was because of the presence of books with LGBTQ+ characters and themes. Initially, in an interview with the Mississippi Free Press, McGee admitted he withheld funds, despite previously approving them and despite not knowing whether he had authority over the board of aldermen to do it, because of “displays of sexual, whatever you want to call it, content.” Based upon this Ridgeland Board of Aldermen meeting, it is clear that “sexual content” is code for LGBTQ+. Now the city has asserted a contract dispute while also issuing a public statement that reads, in part: “The Board of Aldermen has not withheld, is not withholding, and will not withhold money because of any books in the library system.”

That’s right: the city is raising a contract dispute not only after anonymous  complaints about LGBTQ+ books but also after previously approving the funding in its budget. Were the mayor and the board of aldermen asleep at the wheel?

Book bans may be as routine as complaints about weather. “A week never goes by without someone attempting to ban books,” says Kevin Goldberg, First Amendment Specialist at the Freedom Forum (a nonpartisan 501(c)3 dedicated to educating the public on the First Amendment). “They are also becoming more and more absurd.” Goldberg noted attempted bans of children’s books about Dr. Martin Luther King, Jr. and Rosa Parks.

Tonja Johnson, Executive Director of the Madison County Public Library (of which the Ridgeland library is a part), says book bans “tend to ebb and flow with the social issues and political or religious discourse dominating the landscape.” According to the American Library Association, a majority of attempted bans are for books “centered on issues of race, gender, and sexuality.”

But why ban these books? Goldberg sees this as part of the culture wars: some parents want to teach their children what they believe and, when they don’t feel in control, they overreact. It’s fear, according to Johnson: “fear of ideas that are different from our own, that push us outside of our comfort zone and challenge us to reevaluate ourselves and how we see others.  And I think because books have the power to show us something inside ourselves or in others, it’s exactly why it should be up to the individual to decide what is right and appropriate for their needs and their family’s needs.”

This is why we have the First Amendment, says Goldberg. It “protects us from unreasonable intrusion by the government into what we say, express, read, not say, not read, not express.” Fundamental to our ability to self-govern, it allows us freedom “to express ourselves at our most basic level: music we listen to, shows we watch, movies, books, art.” It allows discussion of every issue and forces people to reevaluate their beliefs. Books geared to LGBTQ students are an important part of this purpose: “They need to be able to express themselves and remain a part of the debate, not just with the government and advocating for their rights, but informing all of us what it means to be LGBTQ.” Access to those books is important.

Free speech is preferred over regulation, “knowing we’ll be exposed to things we may not want to hear,” and, according to Goldberg, the First Amendment says we need that exposure. Still, it doesn’t mean “no law.” Goldberg summarizes it this way: “IF the government tries to regulate speech, it must be exceptionally narrow so that all protected speech can occur.” Basically, it’s okay to regulate “when the government has a compelling interest and the way it’s done is narrowly tailored to meet that need. So that you prevent that harm and nothing more.” Does this mean a book can be regulated? According to Goldberg:

Even if you can find a compelling interest to limit access to a book in a public library (let’s say it’s inappropriate for kids), banning the book is way too broad and not narrowly tailored. Moving it to another section could be problematic. No children are the same, so age-based cutoffs will be hard because it’s vague to say what’s inappropriate. More importantly, view-point discrimination is almost always going to violate the First  Amendment. For example, not allowing ‘pro-LGBTQ’ books and allowing ‘anti-LGTBQ’ books will never advance a compelling government interest.

With such strong protections, do bans reflect a lack of understanding or a lack of concern for the First Amendment? Goldberg thinks it’s both. He’s seen situations where folks didn’t understand (like how the First Amendment impacts the internet), but, sometimes, they don’t care. Political officials “don’t expect to be challenged, especially in smaller towns and particularly with book bans in schools. Mayors don’t expect folks to stand up.” This is exactly when we need the First Amendment: to counter the government and combat peer pressure.

It may be possible that Mayor McGee and his constituents simply don’t care: they want the books removed. In response to a query by this FNews writer, the mayor’s office provided nothing more than the Board of Alderman statement referenced above. Although declining to comment on the current dispute, Johnson describes libraries “as a place of community where everyone is welcome to learn, work and share ideas.” In this communal space, Johnson sees the value of libraries every day: “children who fall in love with stories, job seekers learning new skills and building resumes, students completing homework or taking online classes, and patrons of all ages using the library as a place of education, entertainment, culture and community.”

Jason McCarty, Executive Director of Capital City Pride in Mississippi, echoes this view of libraries as safe spaces, particularly for queer youth: “if they don’t have a loving family, they can go there after school and maybe along the way they read a book with a character similar to them, which lets them ask questions. When a child reads a book that provokes thought, it’s powerful.”

But the First Amendment is not just about a specific book or work. Censorship is a threat to everyone. The First Amendment is about the lives it helps, the minds it fosters. It’s inherently important for creatives, whether they create art through music, books, dance, film, on a canvas or a wheel, or some other medium. Some basic concepts every creative should know:

If you’re curious, here’s a partial list of the books in the dispute between the Mayor of Ridgeland and the Ridgeland Public Library:

The Job of the Writer