You’re Too Hot to Be a Preschool Teacher

The Madonna-Whore Complex persists in the pink collar labor market. 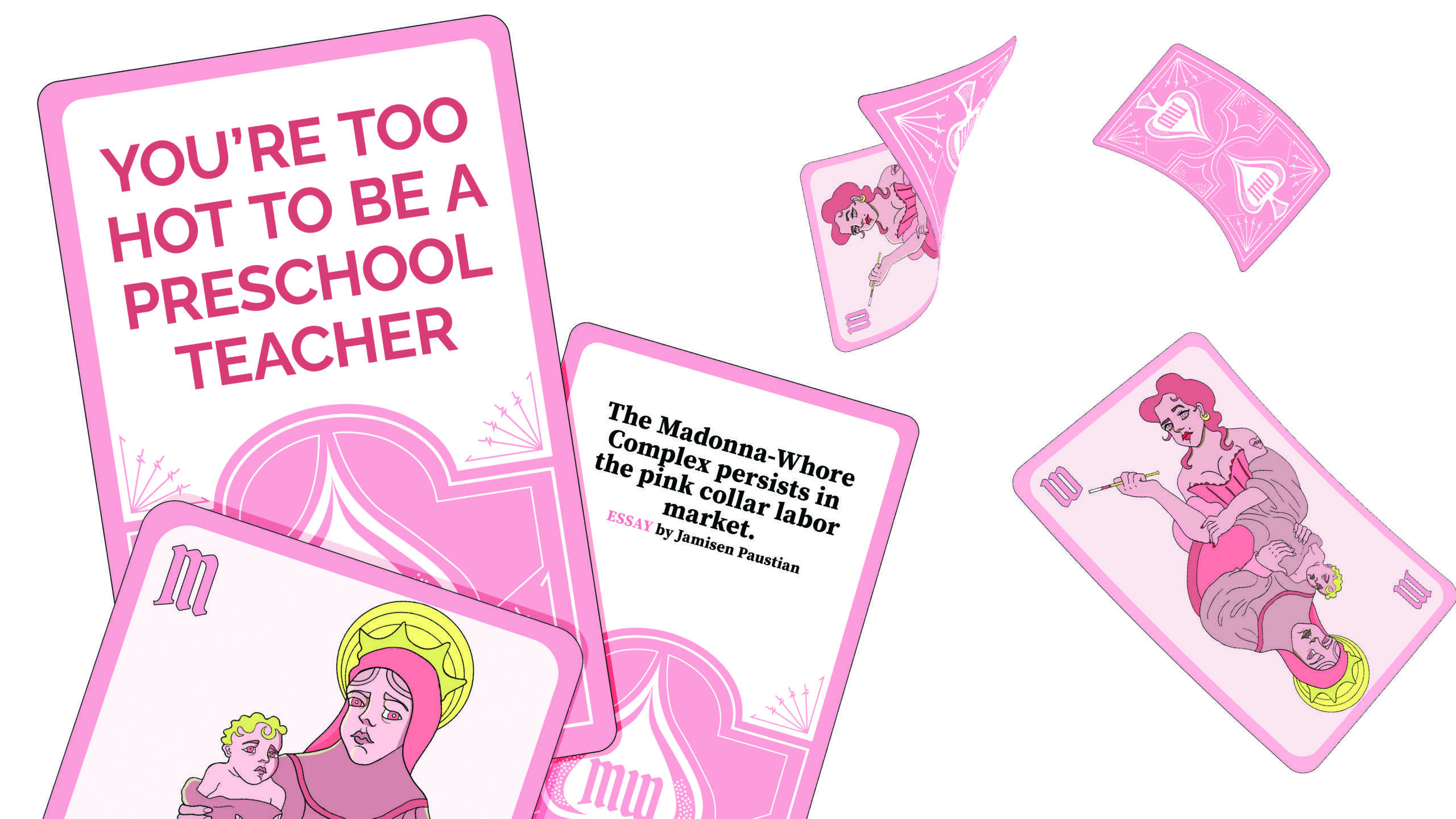 One hot and sticky day in July 2018, my best friend and I wrangled an invitation to a rooftop pool, where we spent the day dangling our toes in chlorinated water and mingling with randoms. After talking to a bro-y stranger for a few minutes, he asked me the obligatory get-to-know-you question:

I told him I taught preschool. Without hesitation, he looked me squarely in the eyes and replied,

“You’re too hot to be a preschool teacher.”

This wasn’t the first time I received a version of this response when discussing my profession, and it wouldn’t be the last. I’m sure you’re currently wondering if I’m an Emily Ratajkowski doppelganger so I’ll save you a Facebook stalk: I am decidedly not “too hot” to be a preschool teacher.

If you don’t speak misogyny, let me break it down for you: This man was not trying to imply I should forgo my career educating our country’s young minds to sport bikinis in the pages of men’s magazines. What he’s really saying is that he wanted to fuck me, and he can’t conceive of women as both sexy and maternal at the same time.

It’s the Madonna-Whore Complex 101. This is also sometimes referred to as the Virgin/Whore Dichotomy, and it describes the paradox that paints women as either pure and good OR sexual and bad. Sigmund Freud coined the term when treating married male patients for impotence: Some of these clients were able to maintain an erection with adulterous partners or sex workers, but not their wives. Freud theorized this phenomenon was caused by the men’s inability to de-compartmentalize. In the minds of these men, women were either chaste, maternal and worthy of love, or they were dirty sluts worthy of fucking. But not both.

This complex is just one of many cultural dilemmas which affect “Pink Collar Jobs,” or jobs that are held predominantly by women, including nurses, domestic workers, and caregivers such as nannies or home health aides.

First and foremost, caregiving professionals deserve to be treated with humanity and respect. Second, pink collar professionals are often underpaid and undervalued. Education Resource Strategies, a national nonprofit that works to transform schools, reports that average teacher salaries in many states don’t even cover the basic needs of a family.

Considering the gender-pay gap that exists between men and women who work in the same job, professions that are predominantly held by women face even more financial inequity. As Sarah Jane Glynn, Senior Fellow for the Center for American Progress, explains in “Explaining the Gender Wage Gap,” “One of the largest driving factors of the gender wage gap is the fact that men and women, on average, work in different industries and occupations; this accounts for up to 49.3 percent of the wage gap, according to some estimates.”

Increasing the volume of this conversation is necessary to deal with the very real fact that our labor market is evolving. Warnings have circulated like UFO sightings every few years about how artificial intelligence has the potential to replace millions of jobs in our workforce. Unlike an alien invasion, AI threatens many blue collar jobs. A study from Ball State University in 2015 revealed that 87% of job loss in manufacturing can be attributed to automation. According to Frank Newport for Gallup, one in four American workers believes that their job will be replaced by automation within the next twenty years, and people without a college degree are more likely to see their jobs threatened in the short term. Although it’s impossible to predict exactly how the labor market will evolve with technology, jobs in transit, manufacturing, and customer service may no longer require a living, breathing human employee in the near future.

Guess which professions are least likely to be replaced with AI?

And yet, the presence of the Madonna-Whore Complex and general sexism in our collective psyche continues an intravenous drip of misogyny into our films, schools, interpersonal relationships, and (as demonstrated by my conversation with the douchebag from the pool) our careers. I taught preschool for nearly five years, and during that time, I encountered plenty of sexism. Random friends from college or high school who saw me behave sinfully as a teenager told me how they “couldn’t believe I taught preschool everyday.” Guys I casually dated often fetishized my job or asked condescending questions, like “Are you the hot one, or are all of you hot?” When one of my three-year-old students accidentally touched my butt during a goodbye hug at pick-up time, his father jokingly advised him to “enjoy it while he can still get away with it.” My best friend who is a nurse has her own horror stories, including one man who expressed his gratitude for “the hot nurse touching his dick” as she inserted his catheter.

If pink collar jobs are the primary jobs that are available in the future, men’s trivialization of them will present an extreme challenge to our labor market.

We need caregiving and domestic careers to become less pink collar and more “purple collar.” We need more people as caregivers, including men.

Featured, News You’re Too Hot to Be a Preschool Teacher
« Previous Story