Are social platforms a necessary evil, or simply necessary? 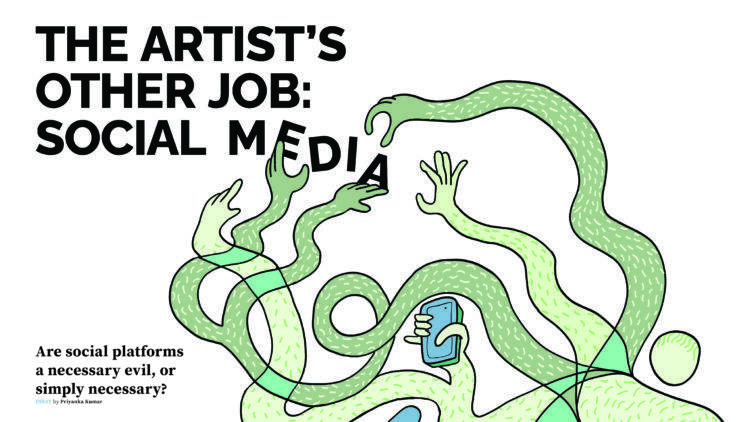 A blessing and a curse. A necessary evil. That is how Hayley Axelrad, an artist based in Toronto, Canada, who currently attends the Academy of Realist Art describes social media.

The notion is not an unfamiliar one. Social media, and its most popular representatives (today, TikTok and Instagram — tomorrow, who knows?) are often on the receiving end of harsh criticism for the unhealthy environments they promote and their negative impact on users. Think back to Facebook whistleblower Frances Haugen’s statement from last fall, about the company’s knowledge of the danger its platforms posed to children and teens’ mental health.

In the case of artists, social media becomes a platform through which they can connect with other artists. In Axelrad’s words, “It makes the world smaller, [gives] new opportunities.” This said, Axelrad (who has both Instagram and TikTok accounts) was very clear — being an artist is about making art, not about being social media famous.

On the other hand, as with Dana K., another artist with both TikTok and Instagram accounts, sometimes social media is the entire reason artists solidify their practice. “In my case I only really got into art once I started social media … It’s not that I was doing it for other people, it was just something that was encouraging. It’s fun to draw what you want, but it’s also fun to get positive reinforcement and [find] people who want to buy your art.”

But social media is not a force that is easily controlled. It is one that can be wild and unpredictable in how it grows (if it grows at all) and is often affected by decisions made by the platforms about what kinds of content it wants to highlight, and why.

Clara Cristina is a Brazilian artist who currently lives in Germany. Even though her start on social media was slow, today she has a wide following on social media. She opined, “I think it’s crazy how fast one can grow on social media. I’ve had Instagram for many, many years, and I put a lot of effort in [to developing] it. I invested money into ads and … I grew my account [to] 3,000 followers in 2 years. One day, something went viral after [Instagram] changed [its] algorithm to highlight videos, and pretty quickly my account grew to 75,000. And it was the same with TikTok … One video went viral, another video went viral, and then al- most every video was going viral, and now my account has over 280,000 followers. I started in June [of 2021].”

The idea of social media being linked to showing your work, making sales, and marketing yourself resonates with every artist. The unfortunate starving artist stereotype does have some truth to it, and in the artists’ view, social media is one avenue to avoid that.

Manasi Arya, a kindergarten teacher in New York, who has a small business that centers representation and women’s empowerment, expressed an immense amount of gratitude for social media. “I think it’s just part of my business, [which] wouldn’t be a thing without social media and I am very, very appreciative of that because it [turned] my passion into something that I could share with the world.”

Arya’s passion for her practice and business, and why she appreciates her platforms, comes from the agency it gives her to be a voice she never had growing up as a child of immigrants in the US. “I have a passion for being able to empower people and just bring [the South Asian] representation that I wish I had growing up. Being South Asian and knowing that I wasn’t alone in the stories and experiences that I had … I have created in my art to be that representation.” She continued, “I think we’re very lucky to be in a space where there are so many diverse people on social media.”

Across the board, the artists interviewed all agreed that the necessity of having a social media presence was dependent on one’s intention. Per Clara Cristina, “I think it really depends on the person. If the person is only putting their stuff out there to have some sort of catalog of things they created so that they can show it around, sure why not? If you want to grow and be popular, it’s also alright. I don’t think it’s completely necessary, but I think it has a big impact on your reach. [If] you have a lot of connections and real-life contacts … contacts with galleries and collectors … then I don’t think social media is necessary.”

Social media feels like an undeniable part of the world we operate in today. As a platform it lends itself to more than simple exposure; it allows for direct contact with potential customers, on-platform sales, and building of a community. Social media trends can also inspire artists, while threatening their authenticity. They can gain a lot of exposure for their work, and then get pigeon-holed into that one style.

It appears social media and commercial art practices for up-and-coming or self-represented artists go hand-in-hand. Perhaps then, as with most things in this world, the relationship between artists, their practices, and social media exists in shades of gray, rather than any blanket positive or negative actuality.

Priyanka Kumar (MANAJ 2022) is a writer, artist, avid reader, and travel enthusiast from Bangalore, India. She is, amongst her other identities, a proud member of the BTS ARMY.

You’re Too Hot to Be a Preschool Teacher