You Are Not Alone in the “Beautiful Diaspora”

An exhibition that reimagines bitter history across geographic boundaries. 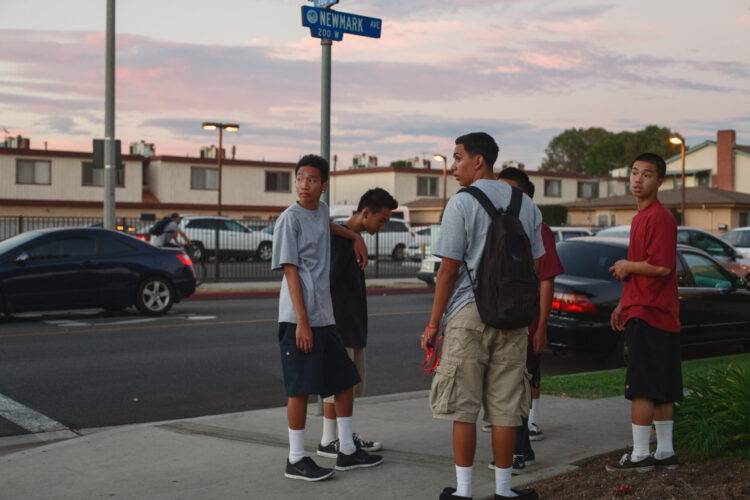 “Kids hanging out on Newmark Ave., Monterey Park” from the “Suburban Chinatown” series by Jessica Chou, as featured in the exhibition “Beautiful Diaspora / You Are Not the Lesser Part.” Courtesy of the artist and Anastasia Photo.

What do you think of the word “diaspora?” Scattering people away from their homeland? We may recall the history of specific nations, the experiences of suffering and instability, but seldom do we think of it as “beautiful.” So I was a bit surprised to see “Beautiful Diaspora / You Are Not the Lesser Part,” the current exhibition at the Museum of Contemporary Photography at Columbia College Chicago. The following curatorial statement made me determined to visit it:

“You Are Not the Lesser Part challenges the pervasive social casualness of assigning bodies and identities to the category ‘minority’ (quite a mis-imagining). Neither negligible nor small, the significance of our presence is not the lesser part of anything. The description word ‘minor’ does not match our fullness, agency, and dreams.”

I cannot agree more! During my study of art history, I often felt the need to use words like “minor” and “marginalized” to refer to specific groups. Language represents society’s past but also shapes its future. Would the repetition of these adjectives act as linguistic violence against these people?

The exhibition provides a possible answer. It features various experiences in diaspora captured by 15 artists of color, curated by Asha Iman Veal, an associate curator at the museum and faculty member in the Department of Arts Administration and Policy at SAIC. 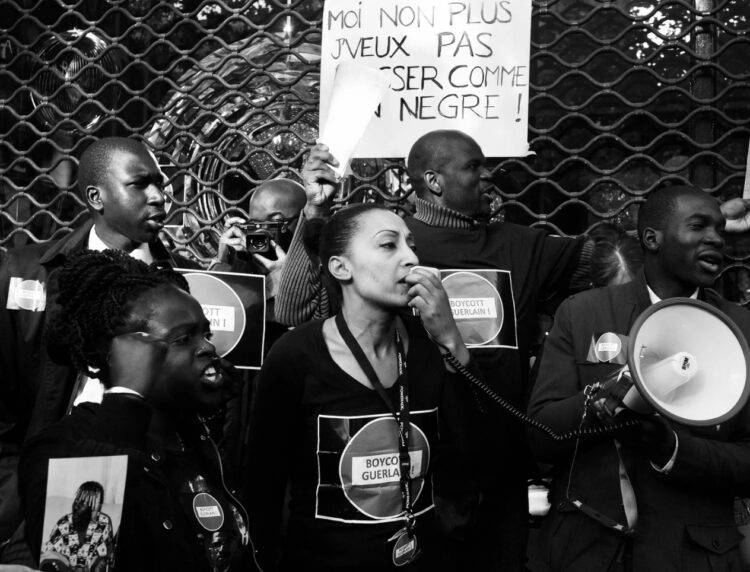 “Champs-Elysées, Paris” from the series “Afropean” by Johny Pitts. Courtesy of the artist.

Entering the main gallery, on the right wall are about 100 photos clustering around name tags of famous European cities like Kiev, Brussels, and Lisbon. If you could only choose one work to see, this photo series of Black lives in European urban spaces and public transportation by Johny Pitts is a must. Most photos capture a moment in the passengers’ lives. A man with a suitcase stands and waits in an underground passage in London. A light beam illuminates his presence and an advertisement stating “New Europe” behind him. A woman, lost in her thoughts, stares out of the window on a train in Amsterdam. The dim yellow light in the carriage brings warmth to travelers on a long journey. Each photo is static, yet the whole composition becomes a documentary.

Jessica Chou’s “Suburban Chinatown” is also exhibited on the first floor. Her photos tell the stories of Monterey Park in California, the first Asian American community in the states. The scene of a Christian choir reminds me of a weekend afternoon ten years ago when I peered through the door of a church in my hometown with my friends, only to find nobody was there. Other photos depict the daily life of Asian American residents: two teenage boys riding bikes after school to explore the neighborhood, a middle-aged man taking a cigarette before work to relieve pressure. As a Chinese student traveling across the ocean, I found these sceneries strange and familiar. 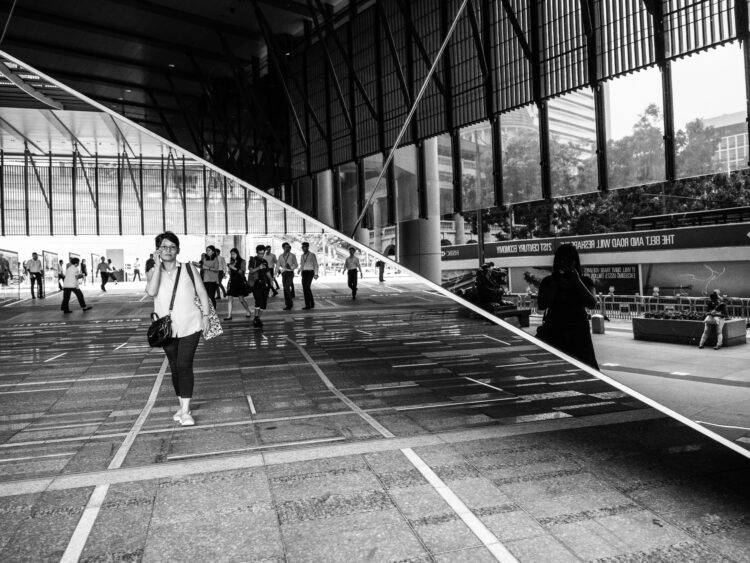 “Mama and I” from the “We Are Like Air” series by Xyza Cruz Bacani. Courtesy of the artist and CHRISTINE PARK GALLERY.

To say the diasporic life is beautiful is not to ignore the alienation and pains in individual experiences. The whole second floor displays Xyza Cruz Bacani’s depiction of migrant workers. Bacani traveled from the Philippines to Hong Kong with her family and worked as a domestic helper with her mother, Georgia. The word “family” has complex feelings for people like them. Georgia followed the rituals of the Hong Kong family to pray for her employer every day despite her own Catholic beliefs, as shown by photos and a prayer altar made by the artist. Shirley, another worker from the Philippines, suffered from illness and stayed in a shelter for months because her employer refused to pay for her hospitalization. There exist moments of power imbalances when migrants feel their inability to be genuinely accepted as a part of the local society.

Moving to the third floor, the exhibition shows more possibilities to reimagine the diaspora. Ngadi Smart documents two drag performers with radiant appearances in lush, green forests. These two drag queens from Côte d’Ivoire dream of having an international presence while improving the local acceptance of art around gender performances. A participatory artwork from Cog•Nate Collective is inspired by an artist’s clothesline near the US-Mexico border. Migrants usually leave their used clothes to exchange for the family’s clean clothes put on the line. The artists recreate the clothesline and pin small photographs of clothes on it. They encourage viewers to take a print and hang a piece of clothing or shoes instead for exchange. All items collected will be donated to a migrant shelter near the border.

My favorite work is “Whence You Came,” a video from London-based Ghanaian artist Abena Appiah. Her grandparents traveled from the West African coast to England in 1965, searching for a better life for her children. The gentle narrating voice of Appiah’s grandmother is reassuring, along with montages of the sea, workers, labor market, seagulls, harvested vegetables, and the sun, merging in a distant and poetic atmosphere.

The exhibition may appear fragmentary and discontinuous because the diaspora is weaved by individual experiences, and there is no need to leave a space for a grand narrative. When the classification of “major/minor groups” becomes a constraint manipulated by power, it is time for us to achieve self-liberation through observation in our journey. A quote from diasporic Black writer James Baldwin in Appiah’s work echoes in my mind: “If you know whence you came, there is really no limit to where you can go.”

“Beautiful Diaspora / You Are Not the Lesser Part” is on view with free admission at the Museum of Contemporary Photography from March 3, 2022 through June 26, 2022. Visitors are encouraged to make a reservation here.

Yunyao Que (MAAH 23) is the art critic at F Newsmagazine. She is looking forward to summer all the time.

Arts & Culture, Featured You Are Not Alone in the “Beautiful Diaspora”
« Previous Story

Show Up and Show Off