When SAIC Was Canceled: Remembering “What Is The Proper Way To Display An American Flag?”

In 1989, the US government tried to stomp out a work by SAIC student Scott “Dread Scott” Tyler. 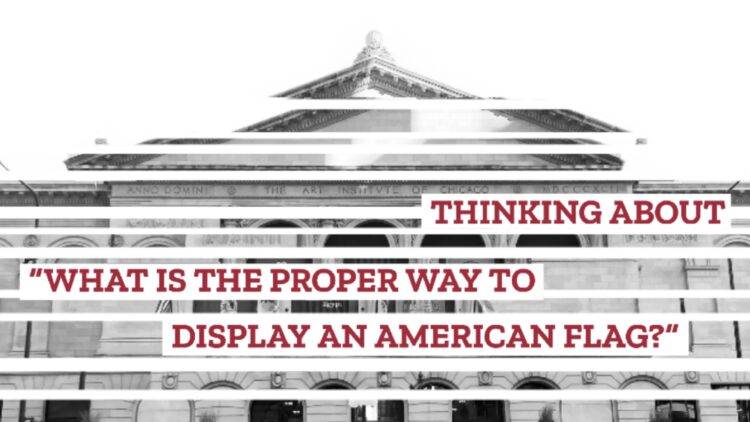 Art and cancellation go way back — we could look to the ancient Roman principle of damnatio memoriae, striking faces from sculpted reliefs, for inspiration. But recent history also provides ample examples. For a moment in the late 1980s, SAIC was one of them.

This story of cancellation starts with a literal cancellation — the closure of a public, juried student exhibition at SAIC organized by the Ethnic American Students United. Riled by the exhibition, a group of approximately 60 military veterans and their supporters marched outside the school Monday, Feb. 27, 1989. Two days earlier, four protesters entered the galleries and handled one of the student works. Meanwhile, regular protests occurred outside the Art Institute building. In response, SAIC administration limited campus entry to students, staff, and faculty. The veterans threatened legal action against the school for the exhibition. Bomb threats, crank calls, and other harassment followed suit.

As things in America often do, it revolves around a flag. Not a Jasper Johns flag, or a David Hammons flag, but rather “What is the Proper Way to Display the US Flag?” by interdisciplinary artist and then-undergraduate student Scott “Dread Scott” Tyler (BFA 1989), referred to here as “Scott.” Unlike Johns’ flag, Scott’s flag is a plain Old Glory. The catch however arises in its arrangement: Scott’s flag lies flat on the ground. To participate in the work — an installation featuring a photomontage of South Korean students burning American flags and flags draped over coffins, plus a comment book on a shelf — required walking on the flag in order to write in the book.

“I wanted to make work that implicated the viewer in these questions in one way or another,” Scott said in an interview with SAIC in 2015. “The fact that people chose to stand on the flag was what made the piece so provocative. People who liked the work expressed a range of social and political perspectives — dangerous ideas that were not popular.”

”Technically, the work is not much,” then-president of the school Tony Jones said to the New York Times in 1989. ”Its centerpiece is a store-bought, $3.95 American flag made in Taiwan.”

Response to the work and its exhibition followed an exponential curve — slow at first before everywhere all at once. In the same interview, Scott noted that “Flag” was first installed months earlier at an alternative art space in Chicago. It was not until its appearance in the juried SAIC student exhibition, “A/Part of the Whole,” that reactions took an aggressive turn.

Harassment towards Scott and the school followed the exhibition opening, including but not limited to death and bomb threats according to the March 1989 issue of F Newsmagazine. Per one F writer, an anonymous woman called the school and asked: “What am I supposed to cover my son’s coffin with?” In response, the school closed the exhibit Feb. 27 and limited access to campus.

In turn, SAIC students confronted the veterans and their supporters, according to the same edition of F. When the group of approximately 60 protesters arrived Monday, Feb. 27, an unspecified but “larger” group of students met them in front of the school. Students brought signs reading “anti-patriotism is not a crime.” Veterans responded with the Pledge of Allegiance. According to the author, not all SAIC students approved of the work, but many nonetheless supported Scott’s right to display it.

The same day, F published a letter from Scott where he stood by his work and its response. “It is absolutely necessary to offend the sentiments of this vicious patriotism,” he said. “[F]rankly, if black people had not been willing to offend and anger people, we would still be chattel slaves.”

Closure of the exhibit by the school drew ire from students and faculty alike. Although the gallery was reopened to the SAIC community on March 2, both the Student Union and faculty supported its reopening to the general public, according to statements in the March 1989 edition of F.

“We demand that the minority students’ show, ‘A/Part of the Whole,’ be reopened and its exhibits displayed in the form intended by the artists participating in the show,” the collective faculty statement said. “We emphatically deny that artists can be held morally responsible for acts of aggression undertaken by third parties in response to their works.”

Meanwhile, “Flag” became the talk of the town in wider discourses. Tribune columnist Clarence Page chimed in on June 25, 1989, with a column titled “Upholding the right to be offensive.”

“It shouldn’t take a college degree to figure out that anyone who lays an American flag on the floor and invites comments on it … should expect to receive something other than love notes,” Page wrote. “Acts have consequences.”

Page went on to highlight a work by an unnamed artist titled “What is the Proper Way to Display Scott Tyler,” featuring a photo of Scott placed on the floor.

Earlier, in a March 8, 1989, op-ed in the Tribune, Northwestern University law professor Anthony D’Amato came to the defense of the work.

“In a curious way, the people who are shocked the most by the American flag affair are the ones whose emotions and sensibilities have been affected in precisely the way student artist Scott Tyler may have intended,” D’Amato wrote.

Word of “Flag” soon spread from Washington and Wabash to Washington, D.C., with then-President of the United States George H.W. Bush describing the work as “disgraceful.” Meanwhile, state legislators from Illinois and Indiana passed resolutions March 14, 1989, condemning the work and calling for its removal. On Capitol Hill, the United States Senate voted unanimously (97-0) March 17 to make it illegal to deliberately display the flag on the ground. Illinois lawmakers slashed government funding for the school from $130,000 a year to $1.

In the end, Scott would have the last laugh. In December of the same year, he would make headlines again showing at a flag-centric exhibition at the Lannon Gallery (although the school would bar him from displaying “Flag” again at a graduating students exhibition). And his participation in a 1990 Supreme Court case, United States v. Eichman, concluded with the court ruling that the burning of the American flag qualified as protected speech under the First Amendment. The 1989 responses to Scott’s work and others — the criminalization of debasing the flag — were rendered moot. Burning the flag remains legal to this day.

But the legal defense of flag protest did not nullify the impact of past uproar on SAIC. In a fourth anniversary retrospective, F Newsmagazine writer Claudine LoMonaco noted in the April 1993 edition that the number of student exhibitions at the recently opened Betty Rymer Gallery had decreased following “Flag.”

“Today, students at the school are fighting a more subtle and pernicious form of censorship,” LoMonaco wrote. “Of the 29 shows that have been shown in the four years of the gallery’s existence, only seven were of student work.”

In 1996, Scott’s “Flag” returned, this time in Arizona, as part of an American flag-centric exhibition titled “Old Glory,” a show dedicated to exploring the “use and abuse” of the flag. Other works included a flag in a toilet bowl and a flag made of human skin.

“This is the kind of exhibit of art that makes me feel truly free,” one visitor wrote in the logbook of “Flag.” “I wonder how much bloodshed I’m treading on.”

A condensed version of this article appears in the March 2022 edition of F Newsmagazine.

Pablo Nukaya-Petralia (MAAH ’23) is the former art editor of F Newsmagazine; he was canceled and relieved of his duties after describing pineapple pizza as “based.”

Arts & Culture, Featured When SAIC Was Canceled: Remembering “What Is The Proper Way To Display An American Flag?”
« Previous Story