As successful and varied as The B-52s’ careers may have been, no album matched the magnetic charm of their self-titled debut. 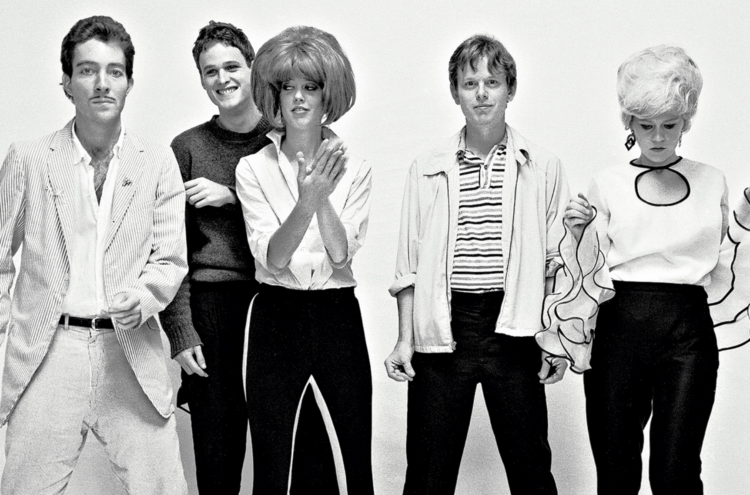 The B-52’s are not from this world. Yet, according to all sources, they originate from Athens, Georgia, a city that produced other pop weirdos like Neutral Milk Hotel and Of Montreal. Like their fellow Athenians, they abduct and redeploy history in ways only one with an otherworldly mentality can. On their debut album, “The B-52’s” (1979), surf rock, funk, 50’s pop, and punk come together with an absurdly tight focus, their aesthetics refashioned into a wholly new sound that’s as interesting as it is fun.

The band is said to have formed in 1976 at a Chinese restaurant in Athens, after sharing a popular 1950’s style drink, a flaming volcano. Their communal volcano erupted into a drunken jam session where the group found they had immediate chemistry. Soon after, they prepared the first version of their debut single, “Rock Lobster,” a punk-influenced surf-dance track. The single achieved moderate success, leading the band to play gigs at clubs in New York City, where they became a staple live act during the late 1970’s. In 1979, they signed a record contract and flew to the Bahamas to record their self-titled debut at Compass Point Studios. This strange pop artifact was a complete commercial success. Supported by a re-recorded “Rock Lobster” single, their debut went platinum within a year of its release. It was particularly popular in Australia, where it went double platinum.

Their debut showcases each of the members’ unique and potent weapons. On the new version of “Rock Lobster,” singer Kate Pierson’s vocals hit the whistle register with such strength, it could cut steel. On the same track, Fred Schneider’s sprechgesang vocal style adds an earnest and campy passion. Keith Strickland’s drumming provides solid ground for the other members to work on throughout the album, showing just the right amount of restraint but always in the groove. But as essential as Kate, Fred, and Keith are to the B-52’s success, the two anchors to the band’s wild ride are siblings Ricky and Cindy Wilson.

Ricky Wilson is a criminally underrated guitar player. His riffs are catchy, but off-kilter  – strangely tuned but instantly pleasurable. They have an elasticity that his contemporaries can’t match. Devo’s guitar work has a similar energy, but it’s much more boxed in. It doesn’t have the same bounce. Ricky’s playing also has a lot more muscle. There’s a real punch; each pounce from chord to 3-note riff feels like an uppercut. The fluid movement of tracks like “52 Girls” and “Rock Lobster” owe much to Ricky’s guitar, which he plays like a liquid whip. The most obvious influence to his guitar playing is surf rock, but as poppy and buoyant as his riffs are, they also have an anxious undertone. Like on the opener, “Planet Claire,” where his anxious edge gives these riffs even more depth and a strange sense of contradictory emotion. Ricky’s guitar strokes can point to several moods at once, all the while retaining their tunefulness.

The B-52’s also had one of the most singular voices in all of pop history in Ricky’s younger sister Cindy Wilson. One album highlight, “Dance This Mess Around,” her voice is totally uninhibited, reaching for every corner of emotion she can find. It’s so much more than novelty, it has true expressive power. Her articulation at every bend and tilt from her lower register into her higher register cracks with emotion.

I must still provide another few words for Kate Pierson, whose technical vocal abilities are startling. While she may not provide the same level of emotional bloodletting as Cindy, her vocals are much more versatile. She can change the timbre of her voice with shocking ease. Her vocals on “Planet Claire” soar and blend right into the synth, giving human texture to an alien sound. She’s a powerful soprano with a four octave range. She can sing clearly and crisply, or harshly and hoarsely. She can harmonize with Cindy endlessly from album start, to album finish. Her voice seemingly never tires.

What the B-52’s manage to do with camp and kitsch is remarkable. There’s no ironic detachment or sense of parody. They’re aware of being strange, but they’re not weird just to be weird. Instead, there’s a genuine enthusiasm and love for these campy aesthetics that’s infectious. You can tell just how much fun they’re having writing  and recording these songs and that excitement is easy to hear. Their lyrics reference ’50s culture with made-up dance crazes and space-age obsessions that they manage to illustrate with absurd vocal creations. They whole-heartedly lean into every strange vocal affectation, giving them an endurance and joy that goes beyond a gimmick. Cheap organs provide counter melodies to Schneider’s singing. Submarine-like sounds meld into eerie guitar riffs. These sounds are rendered in such a fun, kinetic way, they yield a new life, showcasing just how evocative kitsch can be when well arranged.

Both their next record,“Wild Planet,” and their third album, “Whammy!” went gold, but neither reached the same level of popularity that their first achieved. “Wild Planet,” did, however, feature what might be their best song, “Give Me Back My Man.” Their fourth album, recorded after the death of Ricky Wilson, failed to chart. The B-52’s were finally brought down to earth. However, in 1989, they had a comeback with their fifth album, “Cosmic Thing.” Led by the massively popular singles “Love Shack” and “Roam,” the album went Platinum four times over. Still, as successful and varied their career may have been, no album matched the magnetic charm of their debut, which even today seems to be in an orbit of its own.

Nicholas Lykoudis (MANAJ 2023) is a writer and musician. He loves to look at the moon.

Entertainment, Featured “The B-52s” Will Always Be In Orbit
« Previous Story

Ghosts in the Machine: Trick-Editing, Time Loops, and Terror...

The Life and Death of a God Complex: Kanye...

One Response to “The B-52s” Will Always Be In Orbit