Moving Pictures: The Many Deaths of Ti West’s “X” 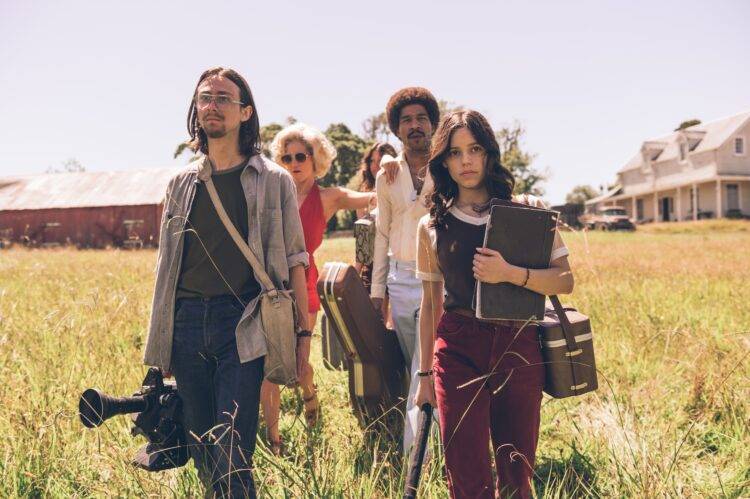 I’ve got a confession to make.

I don’t understand the appeal of slasher flicks.

I should be open-minded, receptive to new experiences, but every time I try watching a slasher movie, I don’t find myself having a good time. I get too caught up on the morality of it all. Horror movies where characters die because they did something they shouldn’t? Trespassed? Crossed a line? Disrespected a burial ground? I understand.

But horror movies where the teenagers die because they had unprotected sex? Doesn’t really do much for me. There’s nothing wrong with slasher flicks. I think I’m just a little too sensitive for them.

When I realized Ti West’s “X” is a slasher, I did my best to set my petty moral quandaries aside, to leave my misplaced demands for fictional justice at the door. And with that baggage behind me, I found myself enjoying this slasher flick. It’s gory, self-referential, campy. It’s light on its feet, and it wants to have a good time. It wants you to have a good time.

“X” follows a group of aspiring filmmakers shooting an adult film on a remote farm in Texas. There’s Wayne, the film’s producer, hoping the adult home video market will lift him out of debt. Jackson, the male talent, is a Vietnam War veteran, and also Kid Cudi with a great pornstache. Bobby-Lynne, the adult star, is working towards her American dream of a house with a pool attached where she can sunbathe topless. RJ, the cameraman, is aspiring to make more than plain old smut. RJ’s girlfriend, Lorraine, the lone prude, is irked by the outright displays of sexuality. And Maxine, played by Mia Goth, is Wayne’s girlfriend, the other female talent, and also the one with the X-factor, with star power, charting her path to becoming the USA’s next sex symbol, in between snorts of cocaine.

The characters, especially compared to A24’s other horror films like “The VVitch” or “Midsommar”, are a little thin. Both those other films fill their protagonists with nuances and edges, making the exploration of their themes, grief and sin respectively, much easier to parse through.

There’s something in there about ageing, about puritanical judgement, about the commodification of the body, about the generation gap, about the divide between sex and love, about indie filmmaking, about the passion it takes to build a movie, no matter what kind. None of these themes really cohere into a cogent moment, a scene where it all clicks together.

Instead, there is a scene where the protagonist hides underneath a bed while something truly horrifying happens on the mattress, and when I finally realize: “Oh, none of that is going to matter.” There isn’t a central metaphor, some underlying thematic exploration, or some great historical reckoning. It’s a slasher movie and people are going to get slashed.

In that, it’s fun. Ti West has his own editing language for the film, with triple cuts between alternate shots, that create a sinister air of escalation and suspense. These edits make uneasy connections between scenes, connecting the characters in unexpected ways. There’s a clear sense of glee with the rhythm of the film, especially as the slashers start slashing. While characters drop like flies, as they do in slasher flicks, the filmmaking becomes almost giddy in depicting their gruesome demises. It’s not self-serious, or self-aggrandizing. It’s often silly, despite the blood and guts.

Sometimes that fun comes at the expense of the viewer. The jumpscare is the dead horse of horror movie discourse. We hate it, we love to hate it, we hate to love it, etc, etc, etc. Ti West loves the jump scare. I hate them. But in “X,” I found most of the jumpscares palatable. They were in line with the film’s tension, the result of a building danger, sometimes, part of a meta-joke on the film’s genre.

But there’s one final jumpscare in the film that almost soured my entire experience of watching the film. It was unnecessary, interrupted the flow of the drama, and more than anything, was boring. And that’s not a word I would use to describe any other part of “X.” It didn’t help that each jumpscare is accompanied by a booming soundtrack, which by the end of the film, I was sorely tired of. That single jumpscare made me recall that I don’t just struggle with slasher movies because I prefer morality plays, but also because I’m a wimp. And being a wimp, if there is going to be a jumpscare, it better be worth the adrenaline, the shock, the few seconds I lose at the tail end of my life. Not every jumpscare in “X” passes that test.

By this point in the review, you know if “X” is for you. You’re either going to be giggling at the gore or eager for it to be over. Or maybe both at once. Maybe that’s the appeal of the slasher movie. It, at once, titillates and horrifies. It forces us to reckon with how feeble our flesh is, but from the distance of the silver screen. It replicates the unfair and random cruelty of the world, but under the director’s watchful eyes. Our body re-experiences that primal instinct of fight-or-flight, while our rational mind knows we are safe. Or maybe we just like watching teenagers get stabbed. Maybe we’re just a little sick like that.

Myle Yan Tay (MFAW 2023) cares a lot about movies and comic books. One day, maybe they will care about him.

Teen Idles, the Teenage Dream, and the Impatience of...