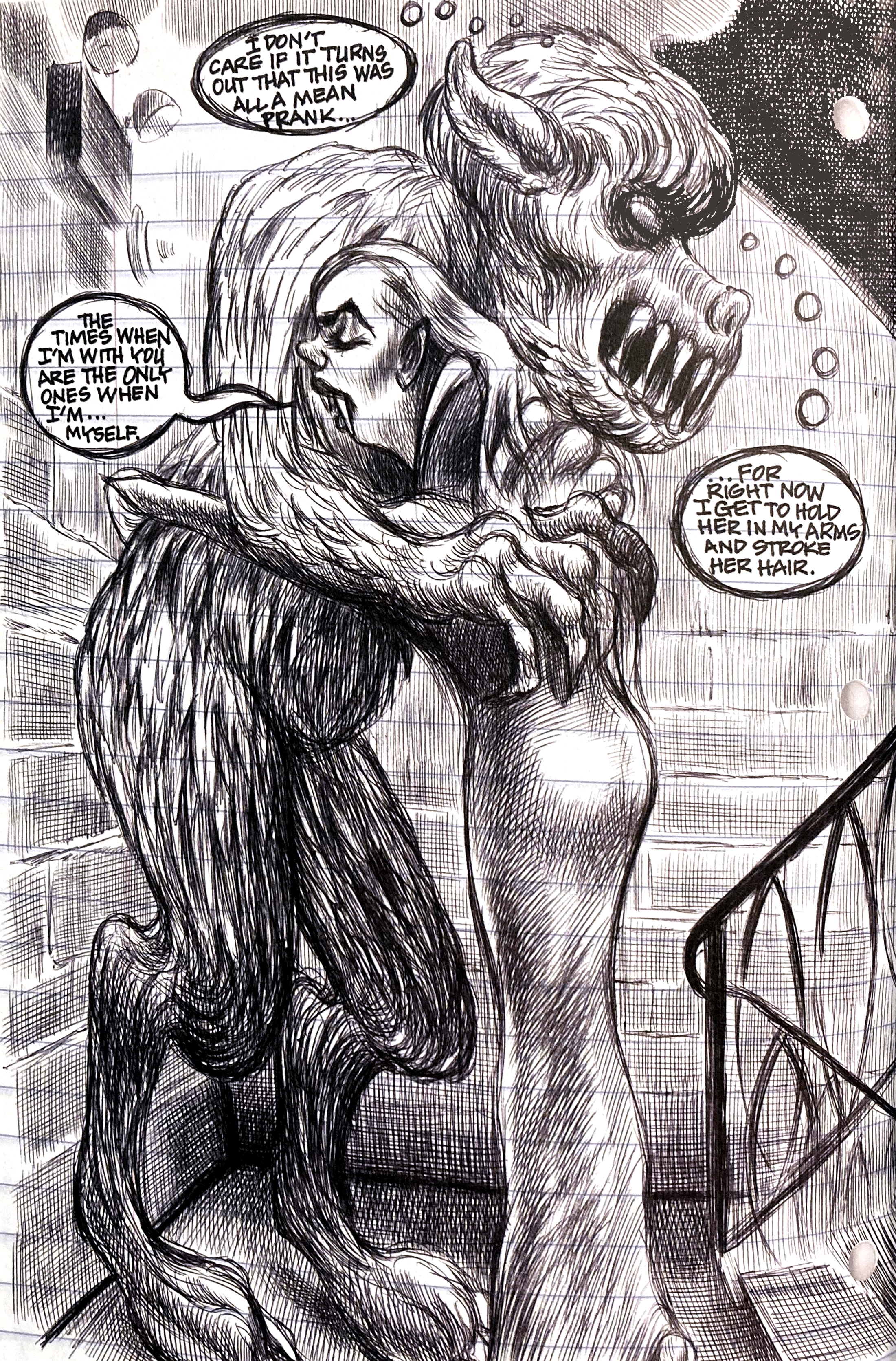 Karen sees herself as a werewolf in “My Favorite Thing is Monsters.”

“Graphic novels are kicking ass,” Emil Ferris (BFA 2008, MFA 2010) recently told me. Her debut graphic novel, “My Favorite Thing is Monsters Volume 1” (2017) exemplifies the ass kicking. The progress of the graphic novel is like freestyle snowboarding at the Olympic Games: half-pipe performances that won medals a dozen years ago would not make it through a qualifier today. Professionals spin and flip more, landing with a flourish. With a tantalizing plot and astounding rending, “Monsters” attains that next-generation status in graphic novels.

Ferris leans away from cinematic paneling, preferring instead intricate spreads that celebrate mark making. “Monsters” does not prompt its reader to wonder if the story would be better as an animation. Rendered in colored ballpoint pen, Ferris occasionally blurs read order in order to prioritize the emotional milieu of a moment. This pseudo-simultaneity brings the reader closer to the fictional author of the pages, Karen, the ten-year-old spitfire engrossed with all things monsters.

At the SAIC Distinguished Alumni Lecture in 2020, someone asked Ferris, “What kind of monster would you be?” Zinged by her “favorite question of all time,” Ferris replied that as a child, she thought she would like to be a werewolf. In “Monsters,” Karen is portrayed throughout as a werewolf. “But as you get older and harrier,”  Ferris jokes, being a werewolf becomes “less appealing.” A vampire suits Ferris more these days.

Ferris’ freedom to experiment within the genre may be influenced by her age; She turns sixty this year. Ferris grew up in Chicago in the 1960s, and uses this setting as the backdrop of Karen’s childhood. In a ground floor apartment, Karen lives with her older brother Deeze, and her protective Mama, who “calls herself ‘a hillbilly gypsy.’” (Mama is modeled after SAIC faculty, Amy England.) Karen’s upstairs neighbor is the idiosyncratic and beloved Anka. After Anka is murdered, Karen dons a detective’s outfit — Deeze’s raincoat and hat — and peers into Anka’s past via cassette recordings. There, Karen finds brothels in 1930s Berlin with patrons who may or may not have pulled the trigger decades later. 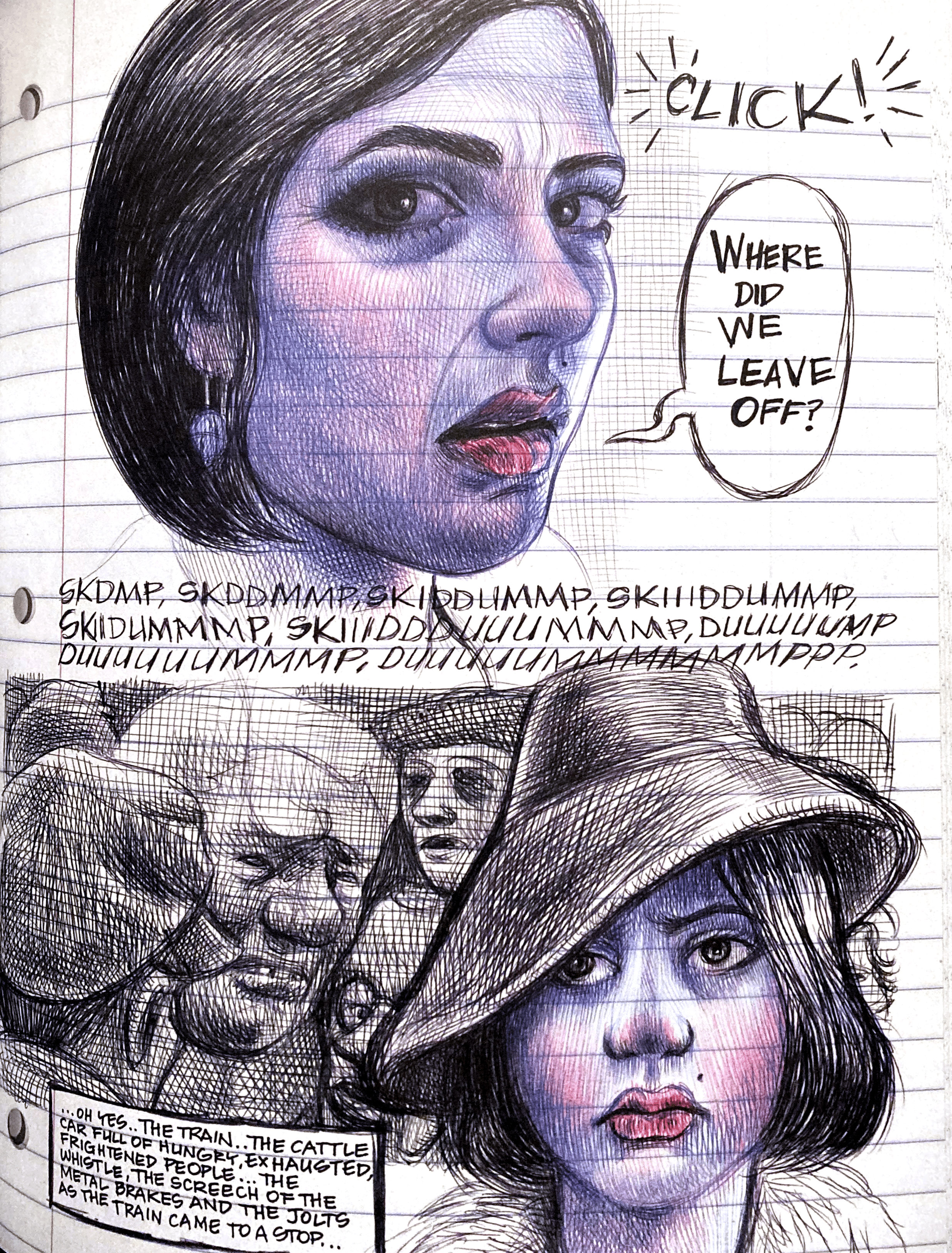 Ferris’ success in immersing the reader into these two eras speaks to her extensive research. On our call, she describes running out of storage space for the books she amassed on the subject. Research on 1960s Uptown Chicago illuminated histories Ferris lived through, such as the West Side race riots following the assassination of Martin Luther King Jr. Research on 1930s Berlin painted a desperate, ravaged place where middle class secretaries would “turn tricks in the park” to feed their parents.

Anka was inspired by an individual Ferris met as a child, whose “boring series of numbers” tattooed on her arm led to a conversation, then a revelation about the Holocaust. This muse was “love incarnate,” a trait that Anka embodies throughout the novel, despite the impossible choices necessary to survive as a Jew in Germany during World War Two.

Histories of the Holocaust, especially those presented to children, often omit mention of victims who were persecuted for being prostitutes, but Ferris unflaggingly demonstrates a “love of disdained things” throughout “Monsters.” For Karen’s queerness, she is bullied. When I ask Ferris what pronouns she prefers, she replies that the freedom of that question is wonderful. If given the choice earlier in life, perhaps she would have chosen other pronouns. In “Volume 1,” we are reminded that the year is 1968, and Karen is squarely called “she.” 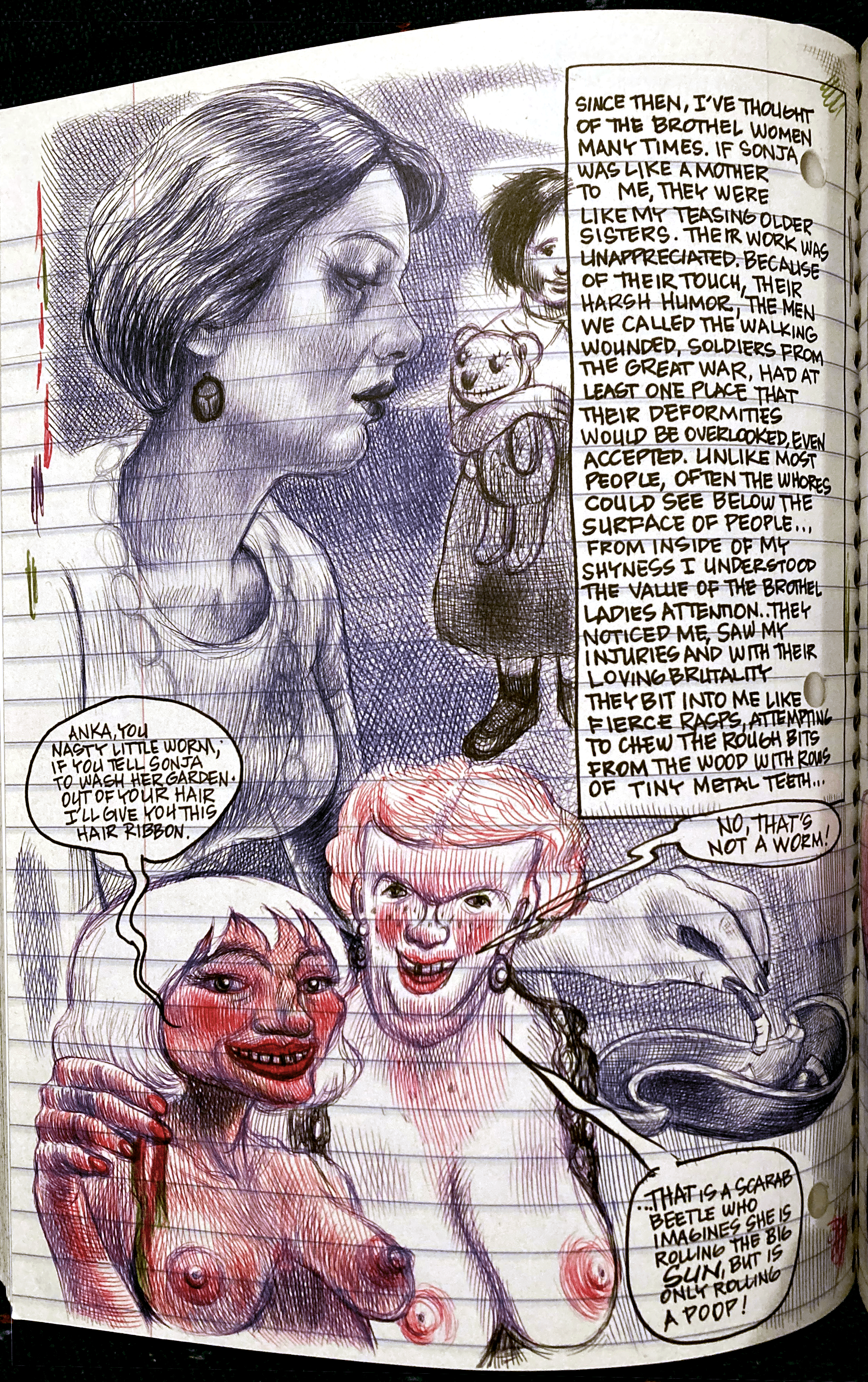 Ferris’ attention to detail provides nuance in the drawings as much as in the characters. Franklin, the Black boy who stands up for Karen, is not a clip art character. In the aftermath of MLK Jr.’s assasination, the flamboyant Franklin is verbally lashed by another Black man on the ‘L’ who doesn’t believe Black liberation extends to gay Blacks. Ferris’ observant ten-year-old narrator pays honest witness to her world.

In the forthcoming “Volume 2,” readers anticipate revelations about mysterious seeds sown about Deeze. Sensitive, protective, and tormented, Karen identifies Deeze as the princess, knight, and dragon in “St George Killing the Dragon,”  a painting by Bernat Martorell at the Art Institute. In an attempt to understand her brother’s troubles, Karen climbs into the Jacob Jordaen’s painting, “Temptation of the Magdalene” to confer with a demon. “It’s perfectly normal to bury a thing that you’d rather not admit,” the demon assures Karen. “We — in my profession — definitely encourage humans to keep secrets from themselves. Nothing makes you sicker faster than that!” What does it mean, then, that Mama is sick, and Deeze breaks down and admits he “pulled the trigger?” 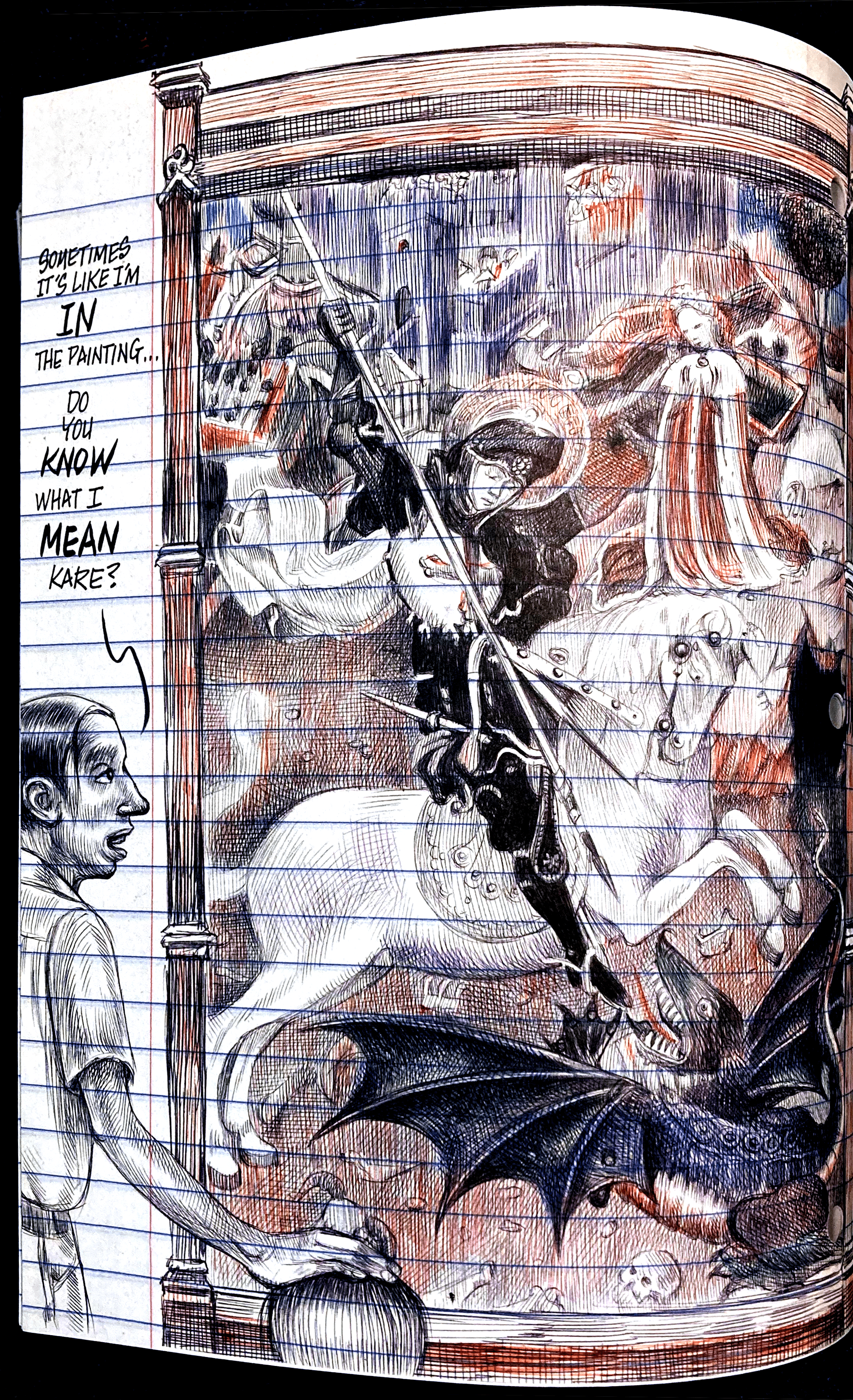 Karen, Deeze, and Emil Ferris make sense of their world through paintings at the Art Institute.

Like Karen, Ferris imagines herself inside paintings at the Art Institute. Her childhood synesthesia is evoked at the museum, which for Ferris is “an experience of taste” that she’s relished all her life. Her parents were artists, so while Ferris could not walk until nearly age three, she was encouraged to “approach” and “touch” the objects around her by drawing them, beginning at six months old.

Ferris’ father was saved from a life as a mobster by a scholarship to SAIC. There, he met Ferris’ mother who also studied at SAIC. After Emil was born, the family inhabited a low income building with people from all over the world. The exchange of cultures over neighborly dinners informs Ferris’ open-mindedness and love of “disdained things.”

In her late thirties, Emil Ferris contracted West Nile Virus which left her paralyzed in all but her left arm. Neurologists at the University of Chicago told Emil to expect a life in a wheelchair, but her young daughter believed otherwise. Later, her daughter would be the model for Anka.

While recovering, and still in a wheelchair, Emil enrolled as an undergraduate at SAIC at age forty. In the 280 building as a new student, Emil felt her father’s presence. He was pleased that she was at the school. Now Emil can walk, though her right hand dexterity is a fraction of what it used to be.

The tenacity of Ferris is exhibited by the beautiful, labor-intensive pages of “Monsters.” “The victory,” Ferris said at the Alumni Lecture, “is not getting out of a wheelchair. The victory is not giving up.” 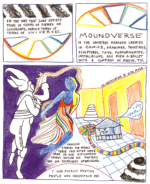