Thinking of You, I Mean Me, I Mean Barbara Kruger

A new “anti-retrospective” considers Kruger’s relevance in the digital age. 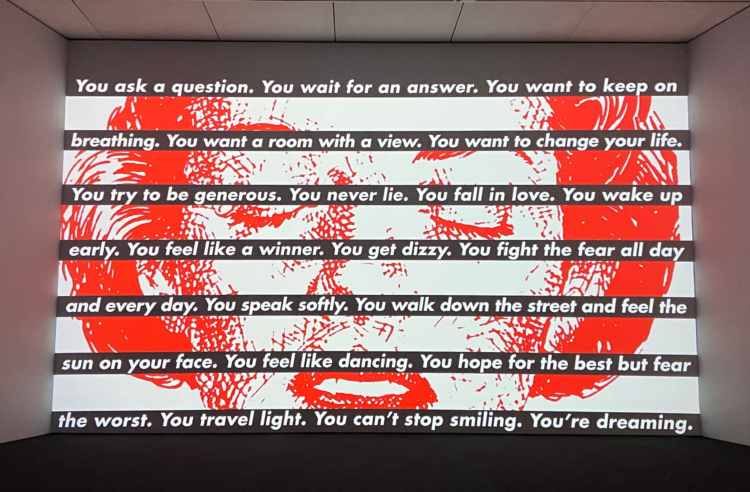 It’s black, white, and red all over —  Barbara Kruger’s major solo exhibition, “THINKING OF YOU. I MEAN ME. I MEAN YOU.,” has taken over the Art Institute of Chicago. Plastered on the facade of the museum, draped from the eves, sprawled across the floor of Griffin Court, even spilling into the streets of Chicago, Kruger’s propaganda announces her self-described “anti-retrospective,” which is “an exhibition that pushes against the notion of a career as a relic or chronological checklist.”

The bulk of Kruger’s show takes place in Regenstein Hall, the Art Institute’s largest exhibition space, and encompasses the breadth of Kruger’s production over the last 30 years. Upon entering, we are flooded with information. Immediately we were impressed with the exhibition’s sound design which complemented the visual barrage in unexpected ways; as we walked around the exhibition space, sounds from different galleries as well as Kruger’s “rogue” audios — ASMR whispering, sounds of cash registers, and other unexpected noises — overlaid each other in a strange-but-pleasant overstimulation. Still, we remained skeptical. Kruger has achieved institutional success and become highly recognizable to artists and non-artists alike; her work has been ironically capitalized off of despite its content. The question persists: could Kruger uphold her level of cultural criticism in 2021, or has co-option by the institution and the capitalist class rendered her work vapid? 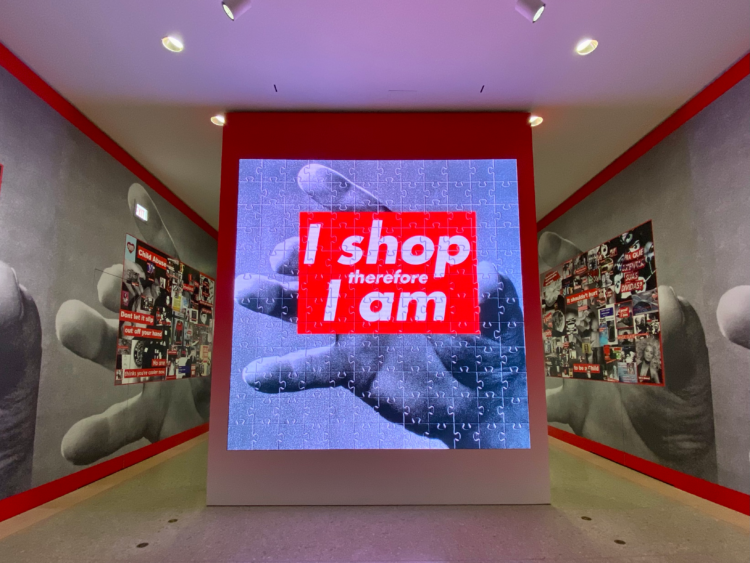 “UNTITLED (I SHOP THERE I AM)” by Barbara Kruger. Photo credit: Ketaki Kulkarni.

UNTITLED (I SHOP THEREFORE I AM)

The first gallery in Regenstein Hall is vinyl-wrapped from floor to ceiling and revisits one of Kruger’s most recognizable works, “UNTITLED (I SHOP THEREFORE I AM).” Originally created by collaging white text bound by a red rectangle that reads “I SHOP THEREFORE I AM” over an image of a hand, Kruger duplicates this work thrice on each of the left and right walls but replaces the familiar phrase with collages. They consist of images sourced from Google which appear to be created by Kruger but are actually mimicries of her style.

Centered in the entrance is a free-standing wall. On its front face is a video installation of the original reimagined to collapse into puzzle pieces and then rebuild itself, clicking into place. On the back is a grid of people wearing t-shirts that appropriate Kruger’s aesthetic, most notably one dedicated to Kruger’s brutal criticism of the brand Supreme. It reads, “What a clusterfuck of totally uncool jokers. I make my work about this kind of sadly foolish farce. I’m waiting for all of them to sue me for copyright infringement.” Kruger initiates her stance against meaningless material consumption by playing with the constant regurgitation of information and communication between herself, brands, and consumers.

“THE GLOBE SHRINKS” (2010) is a four-channel video installation that surrounds us in sight and sound, stripping our original skepticism. As we find our way to the benches in the center of the room, we are placed in a trance. Kruger indulges us through overstimulation, and it is inexplicably gratifying. “SHOVE IT,” “DOUBT IT,” “BELIEVE IT” — these words flash across the screen as a voice commands us to submit. They break up curated scenes of stand-up comedy, road-rage, prayer gatherings, and other peculiar videos which flip quickly between the four walls. Opposing projections create metalinguistic conversations about the ways in which we communicate — orally and visually. There is no time for our attention to wander and we are never compelled to leave, as the installation conjures involuntary participation: “Don’t leave. Please. Stay. It’s nice to be in the dark, right? You can relax a little…” We must jerk our bodies back and forth in an attempt to keep up with the onslaught of information.

Gratified by “THE GLOBE SHRINKS,” we hoped to again indulge in a saccharine appeal to the senses. “UNTITLED (NO COMMENT)” (2020) attempts to imitate a meandering internet surf featuring non-sequitur sequences of found footage, and audio ranging from satisfying hair tutorials and scrolling texts to a clip of a cat lip-syncing the intro to “Shallow” by Lady Gaga. The installation points to the internet as an imaginary and ridiculous terrain of little nuance where desire is logic. For two twenty-year-olds raised in the age of information, it was difficult to identify ourselves within this experience of the internet. For us, the internet is a form of prosthesis; we are born cyborgs, our very being enmeshed with technology. As a result, the internet is second nature, something we were born with and never had to learn. For those of Kruger’s generation, the new world of the internet was one foisted upon them and thus marked unknown as a site of ambivalence and confusion. Just as Kruger wagers the shortcomings of internet culture, “UNTITLED (NO COMMENT)” simultaneously reflects the alienation of a generation. 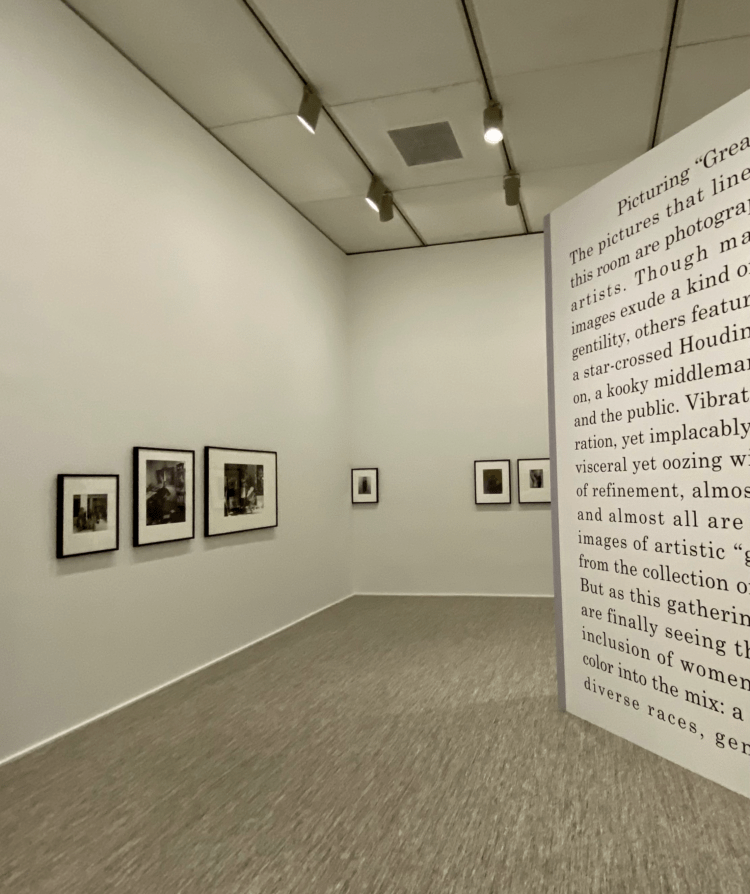 The last work we visited, “PICTURING “‘GREATNESS,’” could be easily overlooked. Tucked in a back gallery, we are inundated with a room filled with images of white male artists such as Norman Rockwell and Andy Warhol. Pilfering photographs from the Art Institute’s archives, Kruger attempts to criticize the patriarchal white supremacy of the art institution, but her commentary falls flat. In the center of the room is a wall that attempts to justify the space: “ … as this gathering suggests, we are finally seeing the incremental inclusion of women and people of color into the mix: a reflection of the diverse races, genders, and classes that define themselves as artists.” To Kruger’s credit, this is true; portraits of iconic female artists such as Louise Bourgeois and Georgia O’Keefe are also on display. For us, however, this description reflects vague, half-hearted virtue-signaling. The scarce additions of non-white and non-male artists commit to a lukewarm revisionism rather than a confrontation with the institution’s role in systemic racism and sexism. Kruger successfully points out the notion of “greatness” defined by its proximity to whiteness and maleness, but institutions such as the Art Institute have been saying this for a while now. Yet, they continue to fill rooms with old white men, just as Kruger has in “PICTURING ‘GREATNESS.’”

WHO IS BARBARA KRUGER TO US?

Ultimately, we agree that “THINKING OF YOU.” left a stale taste in our mouths. For every instance of epiphany produced over the course of our visit, we felt matched a missed opportunity for Kruger to reassert herself as an artist in touch with what it means to engage with meaningful institutional and cultural critique in contemporary America. Kruger’s work seems stuck in the discourse of the “Pictures generation,” unconvincingly reimagined for a post-colonial internet world. Still, Kruger upholds her influence on the art history canon as someone who brought feminism into postmodernism to counteract the patriarchal implications of its precursor, modernism. As we came away from the gallery, we were left to wonder who Barbara Kruger is to us: anti-hero artist or a figment of a collective art historical imagination?

Monica Gong (BAVCS 2023) is the Associate Editor at F Newsmagazine and a self-proclaimed horse girl.

Garret Roberts (BACVS 2023) is a friend of the Associate Editor at F Newsmagazine and a self-proclaimed horse girl.

Arts & Culture Thinking of You, I Mean Me, I Mean Barbara Kruger
« Previous Story

Thinking Outside the White Cube: Alternative Art Spaces in...