What does your server think about while you’re on a date at their restaurant? 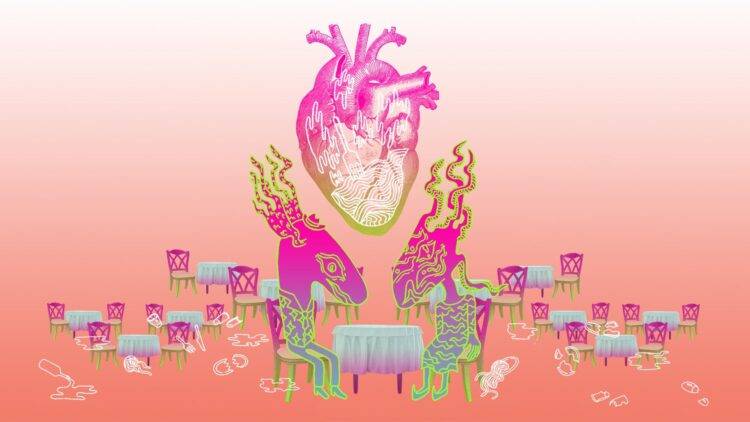 There are few places as rampant with exhausted, disenchanted twenty-somethings as a) dating apps and b) the food service industry.

Sometimes, you’ll hear a seasoned server speak about a new restaurant job as if they had returned to their ex’s bedroom. “I thought I was done after last time, but here I am again.” There’s a certain muscle memory to working in hospitality that remains pretty interchangeable between restaurants. It’s not so different from the emotional script of serial courtship.

At the restaurant where I work, there’s a regular customer who dates with a process as regimented as any dinner service aspires to be. He comes in at least once a week, sometimes twice, and always with a different girl. He brings one red and one white bottle of Winking Owl wine, the cheapest brand sold at ALDI for $2.95 a pop. I know this because I buy it too, and in one attempt to make conversation while I unscrewed its synthetic cork, I exposed its affordability. The customer winced and his companion laughed. Cheap wine aside, I think he might just prefer servers who are less than amicable, so as not to interfere with his seduction (I’m not his type, but one time, he tried to pick up one of my co-workers while his date was in the bathroom).

But what is a Bumble vulture to do, especially when the shuttered bars of a pandemic obstruct the only bridge to their bedroom? Turns out, they build their own bars at BYOB restaurants. I can’t tell you how many first dates I waited on, and then waited to end, none of them bold enough to say, “hey, maybe we should go hangout at my place instead of sitting here cooing about our hopes and dreams while the bus boy furiously mops around us.”

Some couples really do come to eat, though. You can tell a lot about their chemistry by the way they behave when the food takes longer than they expect it to. On a busy night, the only sight more relieving than a table’s food appearing in the service window is their hands outstretched towards one another or their heads jolting back in laughter, too lost in each other’s company to care.

Recently, I waited on a couple who told me that I had served them months earlier, on their very first date. The longer they sat without food, the deeper they seemed to charm each other, and the more convinced I became that they were soulmates and I their soul-server or something like that. But they ate every bite, and when I brought them the bill, I told them I hoped to see them next time. One replied: “You won’t. I’m moving to Europe next week.”

Love is messy, beginning to end. Accidentally liking a tagged photo from a highschool debate tournament, two suitcases and a one-way plane ticket, “you were home all day watching Criminal Minds reruns so why the hell am I looking at a sink full of dishes” messy.

Food service is also messy. Collapsing into bed with hair coated in barbecue sauce, a subtle teardrop landing on one of six separate checks, “my feet are numb but if I don’t book it to the last train before midnight then I’ll have to spend a third of what I just made on an Uber” messy.

But one forgives, and the other does not. Love lets you pick your partner’s hair out of the omelette they cook for you and still enjoy every bite. Food service asks you for a refund.