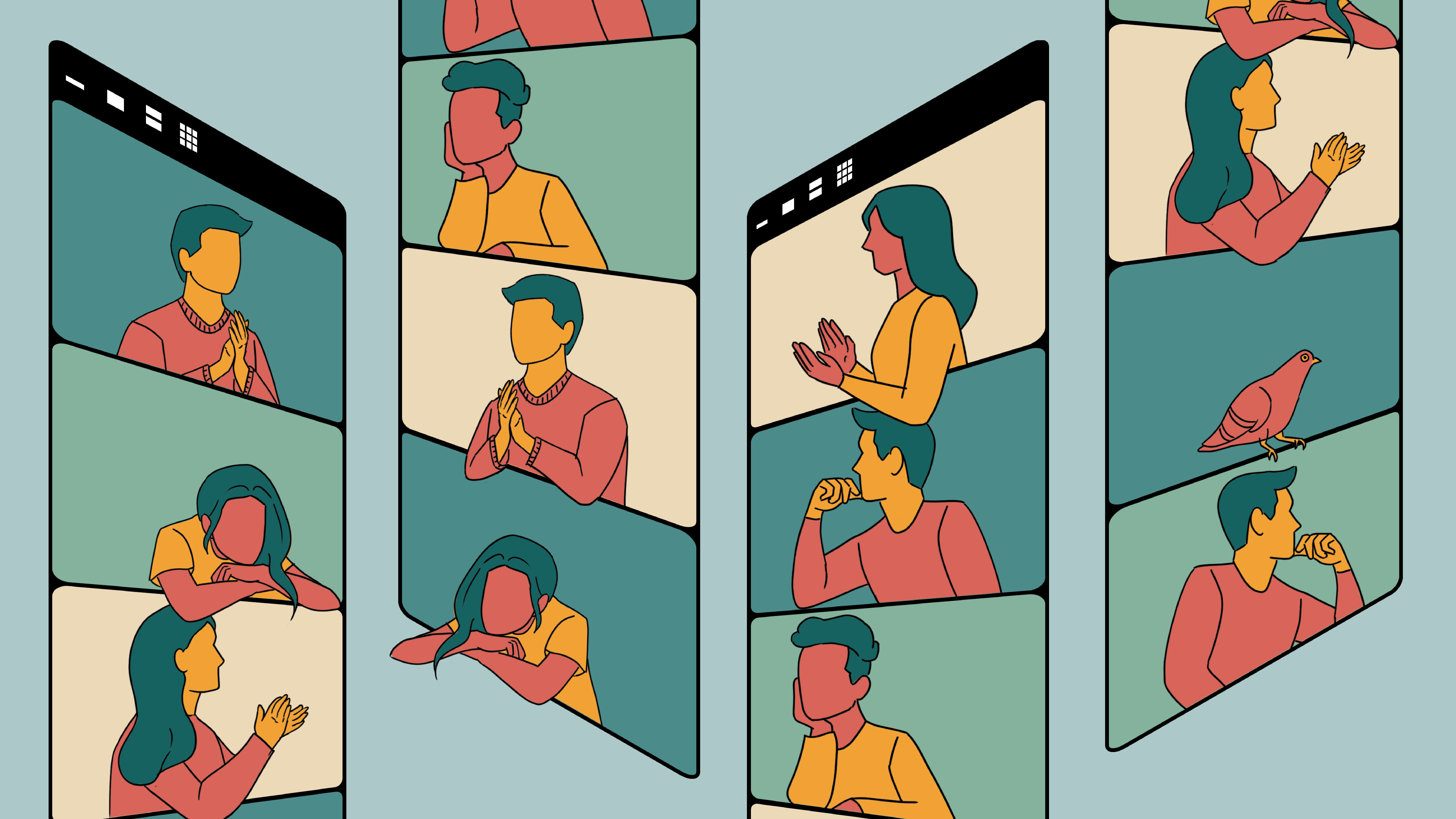 If you had told any performance artist in 2019 that we would all be locked in our homes one year later, turning to streaming platforms and virtual entertainment for solace, they probably wouldn’t have believed you. And that disbelief, while understandable in itself — given that COVID-19 was a wrecking ball to the face that nobody saw coming — would also have partly been rooted in the fact that to envision such a thing happening would be to envision a huge and previously unimaginable threat to the very spirit of performance art itself, let alone all performance-based arts and culture.

Performance art is known for being an artistic medium that often relies on the phenomenological experience of its viewers being in a space and experiencing the work to get its message across. Given this, one could assume at first blush that performance art would have been left in the dust by COVID-19 lockdowns, now that the option to congregate in person is no longer available. However, consider the adaptability of the medium’s artistic element — performance art is less rigidly rooted in the kind of space the work is performed in, unlike, say, theatre plays. Surely, then, it wouldn’t be too big a leap for performance artists to adapt their pieces for the virtual realm?

It is this question that the 2021 IMPACT Performance Art Festival at SAIC aims to probe, and hopefully answer, with a resounding, affirmative yes. Jointly coordinated by SAIC’s Performance Department and the Department of Exhibitions and Exhibition Studies, the IMPACT Festival is a thesis exhibition for graduating students creating time-based work, live art, and performance. IMPACT has been taken online this year to comply with COVID-19 health and safety measures, while still providing students with a much-needed platform to showcase the culmination of their art practice as they approach graduation. The show will take place on April 17 from 5 p.m. to 9:30 p.m. CST, and on April 18 from 1 p.m. to 4:30 p.m. CST, streamed live to a dedicated webpage hosted by SAIC. Additionally, to foster the community spirit that is so integral to performance art as a medium, SAIC will be hosting a Zoom watch party for the festival, allowing faculty, students, and participating artists to partake in moments of shared celebration and bond over the works being broadcast.

Despite the festival’s new, unprecedented online format, the IMPACT production team have not been discouraged. “I believe that showing thesis work is such a celebratory moment at SAIC,” said Lauren Steinberg, Assistant Director of Exhibitions, and one of the members of the IMPACT production team. “As an alum myself, I know how emotional it can feel when you’re ending your time here at school. I want the artists to embrace that feeling and be proud of what we are helping them put out into the world.” The festival’s guidelines for students also present it as “an exciting opportunity to explore the possibilities of presenting live streamed performance,” with a committed team from the Performance Department on hand to “support students in pushing the boundaries of this [online] medium.”

Student artists participating in the festival could choose between three methods of online broadcast — a live broadcast directly from the B1-12 Performance Art space in SAIC’s 280 Building as facilitated by the IMPACT production team, a live-stream from any other location secured and set up by the artists themselves, or broadcasting pre-recorded and edited performance footage. For the artists in the former two categories, this was undoubtedly a sea change in the landscape of their practices. How does one account for the fact that the audience is now behind a screen?

Some artists, like Corey Smith (MFA Performance 2021), had already planned to exhibit a piece engineered for the live broadcast format. Smith’s piece, which he described as “études for the webcam,” was created specifically with the framing of Zoom and the capabilities of the software in mind. “Knowing that the thesis festival was moving online was a very spiritually difficult challenge to think through,” said Smith. “How can we find moments of live-ness here? How can we find the sort of presence and connection that makes live performance so exciting?” For him, the webcam was the key to finding those qualities — by addressing the frame through which we see into other people’s worlds, Smith hopes to “short-circuit our normal Zoom presentation modes” and restore the zeitgeist of virtual performance art pieces.

Similarly, Jordan Knecht (MFA Performance 2021), whose piece was also designed specifically for an online format, noted that the festival’s new format was an opportunity for him to expand his practice by “exploring curiously outside of syntax and rationality.” Others, like llio sophia (MFA Performance 2021), simply refuse to see the festival’s new livestream format as a barrier to their work. “I don’t feel like I need to fit my work into the parameters of the Zoom context,” they said. “I’m going to perform it exactly how I would if I was in the B-12 space with people. The only thing I have to really consider is where the cameras are going to be.”

It is perhaps a testament to the adaptability of performance art that the artists who were willing to be interviewed did not consider the lack of a live audience as an insurmountable loss for their individual pieces, or their practices at large. “It’s apples and oranges,” said sophia, “it’s just a different experience. This is a historic time in the arts; this time of Zoom performances … is going to be something that hits the history books. It’s incredibly innovative, the way people keep challenging what you can do with it, and … the festival is going to be a great example of people doing it in different ways.” In a similar vein, Knecht stated that he did not think of the new online format as a loss, but rather, as a shift. “This style of presentation is not less than live, it is other than,” he commented. “Of course, there are things not the same. The space not filled by what we expect from in-person performances can be filled by something else, perhaps even something outside the realm of our current imaginations.”

On the other hand, Smith did note that he worried about the online format of the festival cultivating an atmosphere in which audiences do not pay full attention to the pieces being performed. “A really critical thing about live performances in person is that you’re around other people,” he expressed, “and if you start checking your phone or leave, other people will notice that … and there is this little bit of social friction that says, ‘Don’t get up in the middle of the performance and leave.’ … Whereas with Zoom, there’s nothing stopping you from being on Wikipedia, reading about the Golden Gate Bridge, during my show.” To Smith, it is this “social friction” that unlocks the full potential of experimental works such as performance art, which may often be challenging or confusing, and requires audiences to stick with a piece to fully understand it. While he admits that there is nothing he can do to control this, he nonetheless sculpts his performances with the intention that someone will be paying attention the whole time, even if there is no way to guarantee this in an online broadcast.

From a technical standpoint, there are many other uncertainties that IMPACT’s new online format has brought into the fray. Joshua Hoglund, IMPACT’s Technical Director, noted that “in addition to the production needs in the 280 Performance space, we now have to contend with the production of getting performances that are remote into our system, and both in-person and remote performances out to the audience. The implications of this are wide ranging.” However, much like the artists he works with, Hoglund is approaching this spiritedly. “I wouldn’t say [the work] is “worse” … We love a good challenge! It’s been an exciting partnership, as it always is, between the amazing team at Exhibitions, the Performance Dept, the Media Centers, and IRFM/Campus AV. When we are engaged in working interdepartmentally … we are SAIC at its best.”

Even as the pandemic slowly draws to a close, opportunities to collaborate closely with others still remain as treasured as ever, and IMPACT has undoubtedly provided SAIC’s graduating performance artists with just that. Both the artists and the production team on the festival met every week in the run-up to the festival, and were constantly in contact, sharing their work and critiquing each other as their pieces progressed. Smith was particularly heartened by this, expressing that he was very grateful to see that “the usual camaraderie between people is still around, even in Zoom-space.”

“I feel so invested in their work and their visions,” he stated, “and I didn’t expect to feel that. I expected to feel isolated and alone. It’s a testament to both everyone’s commitment and this real need to feel a sense of togetherness in this moment.”

Clearly, then, all is not lost for the future of performance art. “We grapple with the absence of a live audience and with how the necessary changes to how we are able to collaborate with others affect our practices and our lives,” said Hoglund, in a perfect summary of our pandemic-stricken times. “But we continue to communicate through performance in new ways, using tools both new and old, because we must.”

The show, after all, must go on.