How the Superbowl Is a Cultural and Political Battleground

Review: Issues of race and politics highlighted at this year’s Superbowl. 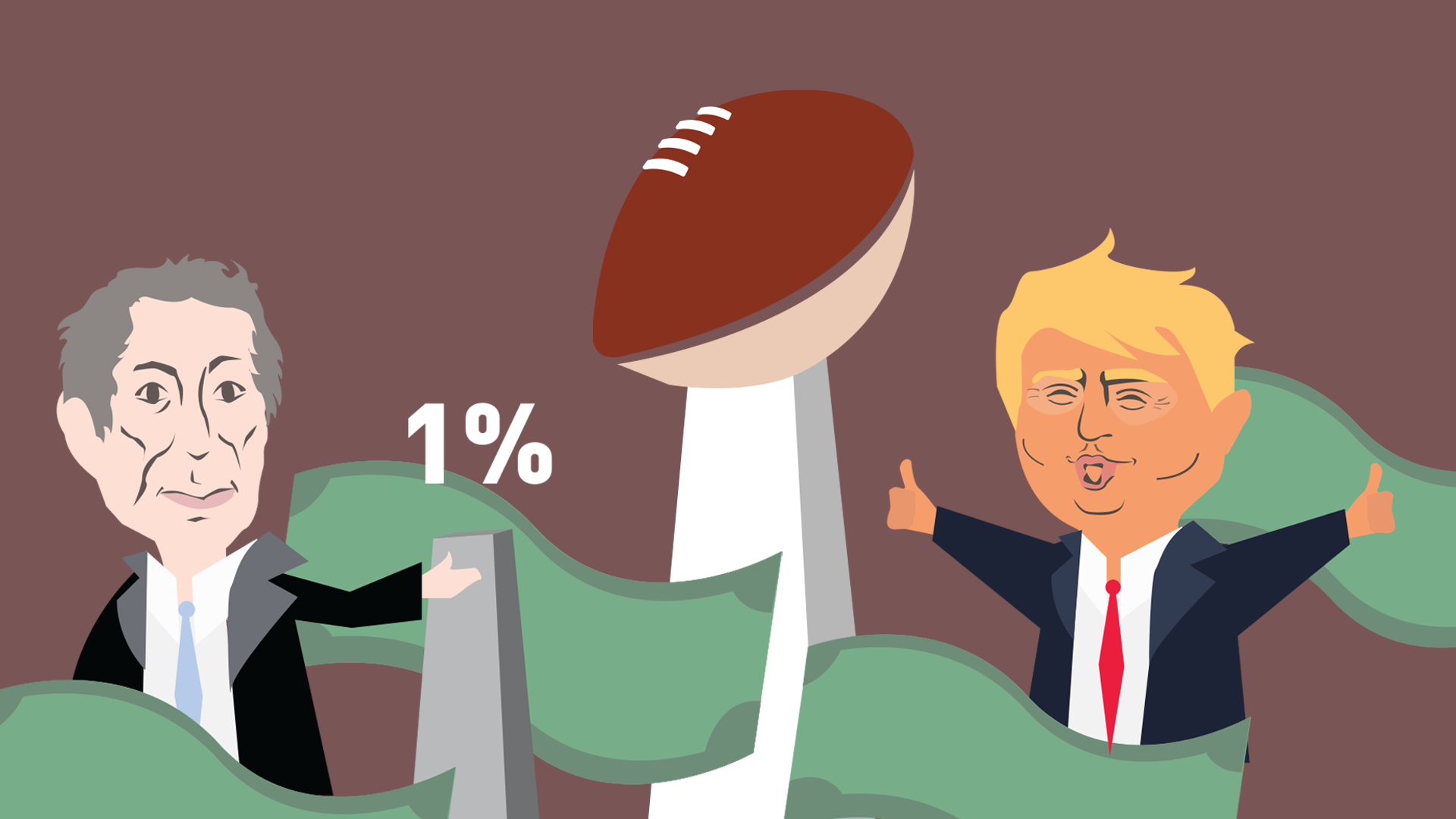 If you’re a student at an art school, like myself, you’re likely not too interested in sports or in the Superbowl — the annual championship game of the National Football League (NFL) and most watched sporting event in the U.S. each year, with more than 102 million viewers this past January. But this revered championship in the U.S. is used as an advertisement billboard every year, and for 2020’s Superbowl LIV, two opposing presidential campaign advertisements — Mike Bloomberg’s and Donald Trump’s — occupied a chunk of the event’s coveted ad space. In fact, every commercial break during the final game was packed with politically and socially charged messaging, and even controversies surrounding both opposing teams carried a political weight. From Trump’s $10 million commercial, to a halftime performance by Shakira and Jennifer Lopez, to hip-hop power couple Jay-Z and Beyoncé sitting down during the national anthem, Superbowl LIV was packed with politics.

The two teams in this year’s final match were the San Francisco 49ers, and the Kansas City Chiefs. Former 49ers quarterback Colin Kaepernick sparked a national debate in 2016 when he knelt during “The Star Spangled Banner” at a preseason game as an act of protest against police brutality and racism. This sparked a wide controversy and backlash against the star quarterback, to the extent that he was not drafted with the 49ers this year and has been “blacklisted” by the NFL despite having one of the best performance statistics in the league. Jay-Z had supported Kaepernick’s protest then, but has since entered a partnership with the NFL as a way to “smooth things over” because it was “time to move past kneeling.” Not only does Kaepernick see this as hypocritical, but so do many Superbowl fans, as Jay-Z, Beyoncé, and Blue Ivy were captured sitting down while the anthem was being played at the Superbowl. Was this a dig at the NFL? Was this in support of Kaepernick? Or was it just a fluke?

Meanwhile, the Kansas City Chiefs use terminology that appropriates Native American culture, prompting fans to wear headdresses face paint. Such practices are said to dehumanize indigenous people into caricatures and costumes, which contributes to racial stereotyping. Chief fans support the team by adorning native headdresses and performing a cheer called the Arrowhead chop, further stereotyping indigenous people. “It’s the portrayal, imagery of the kind of warrior savage, the uncivilized kind of perception and stereotype that has unfairly lingered around Indian country for a really long time,” said Kevin Allis, the CEO of the National Congress of American Indians, in an interview with Reuters.

Jennifer Lopez and Shakira’s power-packed halftime performance was a not-so-subtle political message from the NFL. Inviting two Latinas to perform at the most-watched American TV Broadcast may have been the NFL’s attempt to prove to the nation that they are not as racist as critics claim. Rihanna and Cardi B turned down the halftime show in solidarity with Kaepernick, which raised the stakes for other potential performers. Nevertheless, the two Latina stars joined the conversation. Shakira’s first address to the audience, “Hola Miami”, was in Spanish, drawing attention to the city’s 70 percent population of Latinx people. Jennifer Lopez’s performance of Bruce Springsteen’s “Born in the USA” also turned heads; Lopez wore a cape that resembled the U.S. and Puerto Rican flags, and her daughter — along with several other young Latina girls — sang from the inside of cages. At one point, Lopez shouted, “Get louder Latinos,” likely alluding to laws made by the Trump administration. However, this segment only lasted one minute in the 14 minute performance, leaving a question of whether or not the NFL approved the messages at all.

Trump, meanwhile, had his own campaign: an unanticipated commercial that debuted during the first quarter of the game and reportedly cost $10 million. The ad revolved around Alice Marie Johnson, a 64-year-old woman who Trump granted clemency to in 2018 after lobbying efforts by two female lawyers of color and Kim Kardashian, none of whom appeared in or received a nod in the commercial.

Democratic presidential candidate Mike Bloomberg also dished out over $10 million to make an appearance during the commercial break. Bloomberg’s campaign focused on showing his position in favor of gun restrictions through the story of a woman named Calandrian Kemp, whose son was a victim of gun violence in 2013.

Other commercials from brands and corporations were political, too. At least 11 advertisements featured openly LGBTQ stars and icons: Kim Chi and Miz Cracker, both formerly in RuPaul’s Drag Race, were seen in a commercial for Sabra Hummus; Jonathan Van Ness from Queer Eye appeared in a commercial for Pop Tart pretzels; Katie Sowers, the first LGBTQ person and the first woman coaching in the Superbowl with the 49ers, shared her backstory in a commerical for Microsoft; Lily Singh, LGBTQ Youtuber and comedian, appeared in an ad for Olay.

This year, Superbowl LIV was more than a championship game; it set the tone for 2020 and called for change in a tense national and global political climate. The game was packed with political symbolism, but was it genuine or just a ploy to make the NFL’s image appear more politically correct? The controversy regarding Kaepernick may not be fresh, but it is still buzzing among stars with as much influence as Cardi B and Rihanna. So, was the halftime show featuring Latina stars, and the advertisements featuring LGBTQ personalities just marketing stunts to save face? The halftime show featuring Latino stars definitely seemed like it was. The not-so-subtle halftime performance focusing on Latinx people, displaying the NFL’s new-and-improved culture, happened to clash with Trump’s ideologies (and advertisement). Perhaps the NFL, major corporations, and politicians are getting off too easily, and it’s time for cultural producers like artists and writers to share the field.