How one gallery is growing the network of artists and collectors in Detroit.

Tucked away on Detroit’s 4th St. and Henry St. sits an art gallery. The windowless cinderblock building is painted turquoise, and a banner by local artist Nicole Macdonald hovers above its door. In it, a figure with a hoodie and backpack is pictured mid-stride between the motor city tracks and the gallery name: Collected Detroit.

The gallery is owned by Susie and Charles “Chuck” Duquet. Their extensive collection formed the gallery’s inaugural exhibit in December 2018, “Detroit in the World: Selections from a Detroit Art Connoisseur’s Collection.” Pieces by Joan Miró and Picasso were interspersed with work of artists from the city, such as Al Loving and Renee Radell. The “unique vision” of the gallery, in the words of Managing Director Susan Macdonald, “is to showcase Detroit artists alongside well-known international artists.” The goal is not only to display art from Detroit, but to advance the work of Detroit artists. Collectors, drawn in by famous artists’ names, are exposed to a body of work by local artists: some well-established, others emerging.

The gallery’s collection and mission is made possible in part due to the changing economic landscape in Detroit. Before Collected, Susan Macdonald developed and managed the Grosse Pointe Art Center for 10 years. The years between 2000 through 2009, she told F, were “hard-scrabble times in Metro Detroit.” Nonetheless, she added, “the artists were present, working and selling. Cheap sales, yes, but we all stuck together and supported each other and built on that success.” After the Great Recession exacerbated the city’s economic problems, Detroit declared bankruptcy in 2013. Creditors sought to liquidate the Detroit Institute of Art‘s (DIA) world class art collection, but in what is known as “the grand bargain,” private foundations, the state of Michigan, and the DIA pledged $816 million to the city to prevent the sale of the Institute’s art. In the wake of this crisis, investment in the art scene has grown and evolved. The very foundations that helped bail the city out are rallying around the arts. Macdonald tells me Detroit “is unique in that there are several consistent grants and opportunities provided exclusively for Detroiters.” Opportunities available to artists include the Kresge Arts Fellowship, the Knights Foundation grants, the Eastern Market arts grant — called Murals in the Market — and the Hudson-Webber Foundation grants.

Collected Detroit is conscious of the role it plays. It hones its ability to promote Detroit art and serves as a space for its reception and sales. Collected fosters a broad collector base through private tours, monthly emails, print advertisements, television interviews, social media, artists’ gallery talks, collaborative exhibitions with major non-profits — such as University of Michigan’s Heinz C. Prechter Bipolar Research Program — and an annual exhibition of a major collector’s holdings. Despite some of the private events, “[Collected is] a very inclusive gallery,” Macdonald emphasizes.

Charles Anderson has tracked the art scene in Detroit for years and frequented Collected from the outset. He has been involved with the Detroit Institute of Arts, home to one of the nation’s largest art collections, since he graduated from law school in 1977. He is currently an Emeritus member of the DIA Board for African and African American Art. In the city, Anderson says, there has been a “small percent of people doing the same things — the same people who visited the DIA were also at the Opera and the Symphony.” But Anderson believes the arts scene is growing; he describes it as “vibrant.” Galleries such as Simone DeSousa Gallery, opened in 2008 by the Brazilian artist for whom it is named, are thriving and cultivating a culture of collecting. The Library Street Collective, established in 2012, has taken on projects like redeveloping The Belt, a strip of alley space in the heart of downtown, by exhibiting the work of street artists.

There are benefits to the small and local components of the city’s arts scene, vibrant and growing as it is. Anderson says it is easier “to meet new artists, up-and-coming artists, or people who have recently graduated [from the city’s art schools].” Collected is emblematic of the surge and character of the city’s arts scene. “It’s downtown, people can park for free, and the building itself houses working artists,” he says. Open a door next to the gallery’s bathroom, and there’s a studio with metal sculpture work. Anderson confirms, “Collected focuses on a mixture of people you’ve heard of and those you haven’t.”

“I have seen young people go into the gallery — come up and talk to Chuck with a flash drive with their art on it — and that’s how he finds out about them.” He continues, “the artist Ijania Cortez, she brought a piece in. Now she’s in the show.”

The show Anderson is referring to was Collected Detroit’s summer 2019 exhibit, Deeply Detroit. The exhibit embodied the core of its mission, not only because it featured artists with Detroit roots, but also because it introduced a new artist to the mainstream art scene. 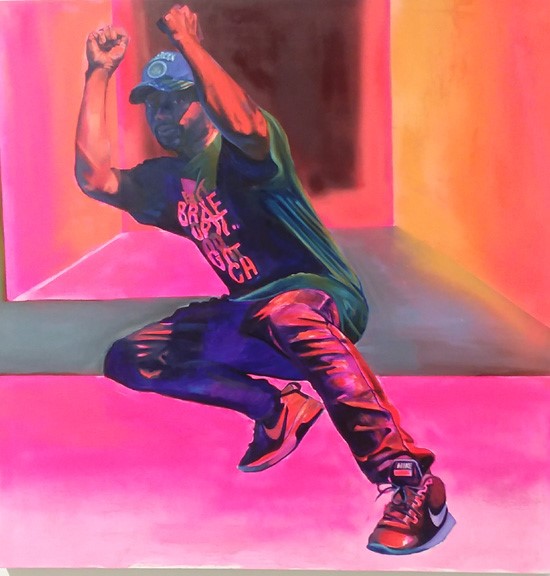 At 28, Ijania Cortez is the youngest person in the Deeply Detroit exhibit by more than 20 years. She is also self-taught. Though she has shown her work at several venues in the city, Cortez tells me this was the “first show of this type of caliber” that she has done. “I was born and raised here,” Cortez tells me. “I don’t know any other way to be but a Detroiter. It’s like someone telling you to look at your own nose.”

Her paintings are rooted in her experiences and an interest in the here and now. Her work is “Everything about being a millennial growing up in the city, in this city in particular — an industrial city, a techno city, a black city. I can’t help but to paint that.” The elements of her paintings — from the colors, to the poses, to the black men who are her primary subjects — all come from Detroit.

Surrounded by women in her life, she tells me many of her paintings are a way of “paying homage to black men.” Cortez says, “I try to show the beauty of the commonplace. These are beautiful people, whether the world doesn’t recognize them, or they just don’t know it.” She will approach people she finds compelling. She talks with them, and meets them where they are, “organically” in their situation. She pointed out one of her pieces at Collected. “I met that guy at a Lobster Food Truck.” She approached him with, “You’re beautiful, can I photograph you?”

According to Macdonald, Cortez’s work has been “very well received, selling several pieces.” One piece was sold to the renowned Detroit muralist Hubert Massey, whose work was also in the show. In the internationally acclaimed festival Murals in the Market, held earlier this year mid-September, Cortez’s mural was unveiled in the heart of Eastern Market. Her work will become a part of a project composed of 200 murals around the city, a network of pieces featured both in the market and in less frequented areas.

In the eyes of Susan Macdonald, the next step for Collected Detroit is to continue elevating Detroit artists to the national and international scene. Macdonald has lived and pursued a career in the art scenes in San Francisco, Chicago, Atlanta, and Santa Fe. But, she says, nowhere but in this city “have I found anything close to the magic we own. That is why people from all over the world visit Detroit seeking out its artistic cohesion and creativity.”

2 Responses to Collected and Connected in Detroit