Ricardo Partida (MFA 2020, Painting and Drawing) agrees that “paint is dead,” but he is undeterred. In work that often references canonical past masters, Ricardo explores the many dimensions of desire — allure, anger, messiness, and violence. In a wide-ranging discussion, Ricardo investigates the roots of his artistic preoccupations, lessons learned from sex work, and what success might look like.

Dustin Lowman: Where are you from?

Ricardo Partida: Originally I’m from Mexico, from Ciudad México, Distrito Federal. My family moved to South Texas in 1998. I was about eight, nine years old, and I was raised in South Texas.

RP: It was a lot of adaptation. Cultural adaptation, as well as an adaptation to the idea of Americana. I remember assuming that the entire U.S. was like Texas, but I eventually realized that Texas is its own little realm. What I believed to be Americana, or my impression of American living, was actually just whiteness, that I was interpreting as Americana.

DL: When did painting become essential for you?

RP: Back in undergrad, I had an art history teacher who instilled this idea of making contemporary art, placing myself in the canon, being part of a conversation. I had no prior training. I did some competitive jazz dancing in middle and high school, and I feel like that was something that propelled my interest in the figure, the way I interpret it, the way I draw it. I’ve always been really into Picasso, the way that he allows the body to take the shape of the frame, oblong itself to occupy space.

DL: When I first met you, you told me about art that was inspired by a community of sex workers. I wonder if you could talk a little bit about that.

RP: So after I finished my four years of undergrad [at UT Austin], I moved to the Rio Grande Valley, and I came across this community of sex workers in South Texas. Due to its being a tight-knit Catholic Latino community, the sex workers were not really talked about. I took it upon myself to fully submerge myself in the culture. For six months, I lived with and partook in sex work, to inform myself about what happens in the circuit. I’ve always seen the southern Texas border as a place where these kinds of communities thrive, due to non-documentation, lack of employment, a way to work when people lack green cards. Also, a lot of people in these spaces are transitioning, or they don’t necessarily conform to conventional ideas of masculine bodies. They seek these communities out for shelter and support. 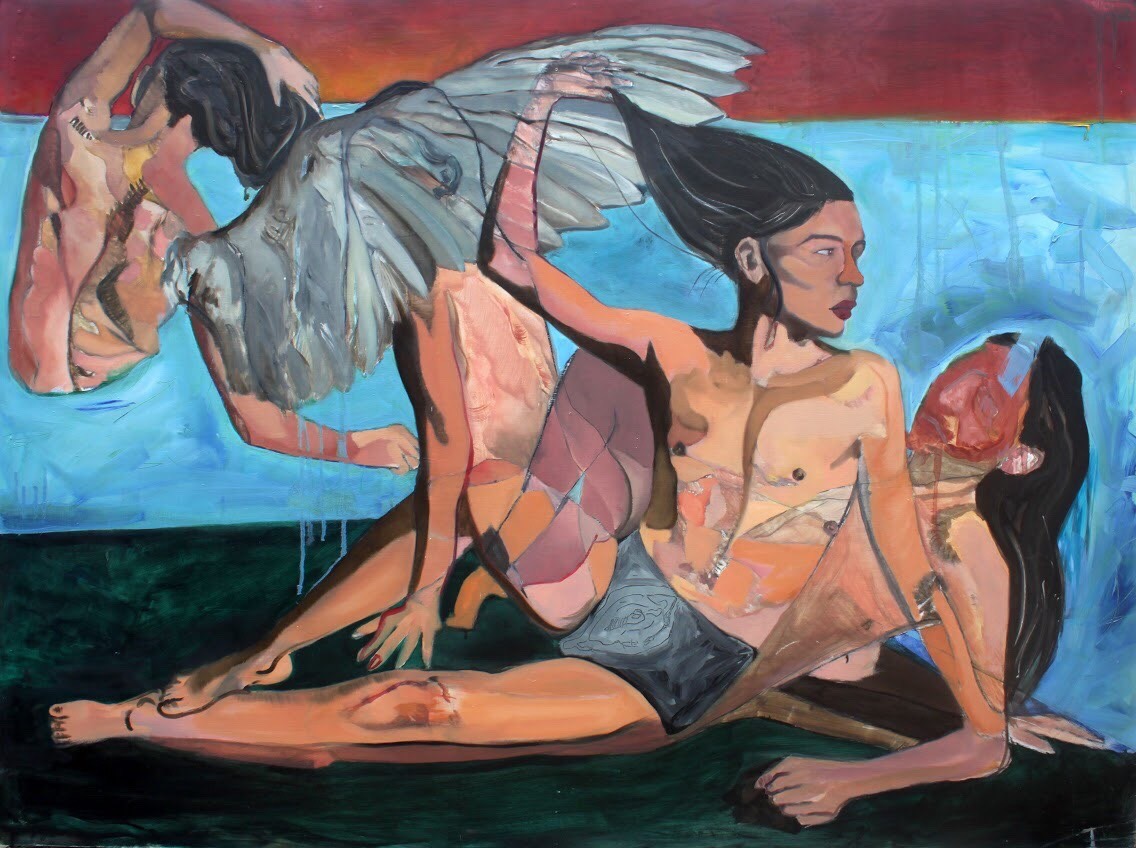 DL: I have two questions — how did you become aware of the community? And what was sex work like?

RP: I came across the community through the club scene. I’ve always really liked to party, to insert myself into the nightlife. It’s a realm for possibilities, especially as a queer man. You can be whatever you want to be, however you want to be it. It’s just for a night. They were very skeptical about me from the beginning, since I was coming into this space as an academic, a Green Card holder, someone they knew didn’t need to use the circuit to make a living. I met their house mother, who was an escort from back in the day, then did some pornography, and then moved back down into Texas. She would usually take a cut from whatever everybody made. She provided a room, as well as protection and guidance. It was definitely a safe space, especially for sex work. I partook in the sex work not just as a way to prove myself, but to satisfy a curiosity, too.

DL: What did you think?

RP: It was really interesting. I thought it was just going to be a lot of sex, but it was mostly human interaction. There’s a lot of doubt that people carry, and being a sex worker was being able to provide a safe space for people to be vulnerable, as well as allowing yourself to have that exchange. It was a lot of talking to guys about their dogs, or talking about their mothers. Dogs and mothers, and how concerned they were about them.

DL: What emotions did you take away from that?

RP: Empathy. I developed more of an empathy towards different types of people, that I wasn’t quite aware of how to address or navigate before.

DL: How did you put that into creative work?

RP: I did some documentation, we took some photos. I used those to get a likeness. All the compositions were referencing old masters’ compositions, as well as other, different works that I found visually stimulating at the time­—Michelangelo, Rembrandt, different ways to move the eye. In some of the paintings I actually included myself as a patron. I’ve always wanted to depict unconventional bodies, unconventional ideas of masculinity.

DL: What did your parents think? Did they know?

RP: Yeah, I remember telling my dad about it, and him being very worried about the police. He saw it as something I was doing for research — not only research for my work, but for my understanding of that space that I occupied, my connection to my community. He could appreciate that there was an investigation going on.

DL: And your mom?

RP: I don’t think she knew. She was aware of the idea, but we never really talked about it. I showed her a body of work and I remember her being taken aback by it, really liking it. It was a win-win. 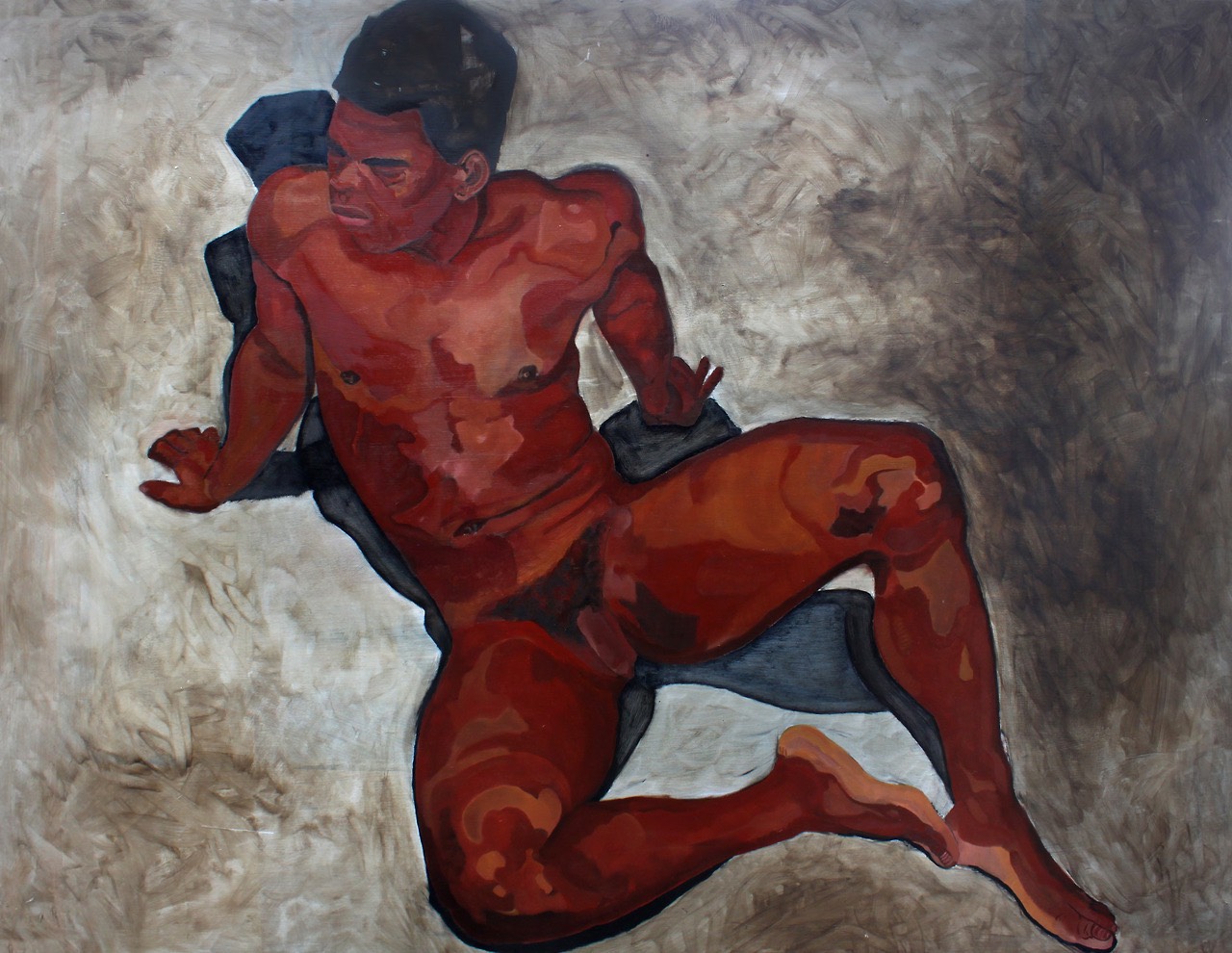 DL: You and I have talked about how desire is fascinating to you. Why is that?

RP: I’ve always been interested in the concepts of desire and menace. As a queer man, a lot of navigating heterosexual realms revolves around the gaze, it makes me aware of my safety, desire, the different dynamics which play into human interaction. I’m sure you’ve had the experience of entering a train car, and having somebody look at you. You wonder whether it’s a gaze of desire or a gaze of menace. You don’t know how to greet it, so you have to keep your guard up.

Over the summer, I ran into a scuffle at the Jackson connection, between the blue and the red lines. There was a guy who was calling my friend and me derogatory terms, and I decided to turn around and scuffle with him. That was a moment of fight or flee. I remember the adrenaline going through my body, and I remember the gaze that we exchanged. I feel like that moment was a pivoting point to my practice that allowed me to become more interested in what that gaze was, different ways in which I could dissect it.

DL: There’s definitely a desire in anger, in wanting to confront somebody like that.

DL: So did you fight?

RP: I don’t know. I think I might have lost. But we were fine. They broke it up and we each went our ways.

DL: So let’s talk about this work, what you’re engaged in now.

RP: Right now I’m working with these images of Cupid, cherubs. I like to think of them as surrogates of desire, symptoms of desire or seduction. I started the series, it’s called “Sweet Honey Iced Tea,” an acronym for SHIT. It’s right on the borderline between desire and grotesquerie.

DL: You notice immediately that they’re all looking at you in an alluring way.

RP: Yes, and at times I like to arm them with knives or swords. Very reminiscent of that interaction that I was talking about, that exchange of energy, of looks.

DL: You feel something, but you’re not sure what it means.

DL: What makes you do a big one versus a little one?

RP: The little ones are made from the leftover palette for the big ones. So every time I’m working on a big one, before I wipe down my palette, I use the paint and create the little guy.

DL: I don’t meet that many painters. I’ve heard painting regarded as passé. Is that on your radar at all?

RP: Painting being dead? Yeah, paint is dead. That said, I do think figurative painting is on the rise at the moment. I happen to be doing it. It’s an intimidating medium because of the history that comes with it, the previous notions of painting we have, it’s hard to place it in contemporary moment. You have this burden of history. The question is always how much to reference it, and how much to grow past it. I am highly informed by ideas of antiquity. They definitely propel my decision-making with these projects. I think a lot about Caravaggio, Rembrandt, Tintoretto. But at the same time I’m looking at Jonathan Lyndon Chase, Lou Fratino, Francesco Williams.

DL: So what’s your dream? What’s your ideal situation for yourself as an artist?

RP: I wanna be someone I’m proud of. I really don’t see any failure happening other than not taking a chance. I took a chance to get into this program, and every day I’m taking a chance not to mess these up, to make good work. That’s another reason why I make the little ones; at the end of the day, if I don’t get one of the big ones done, at least I leave for home with a little one.