When a major corporation slaps a rainbow on its logo, what does it stand to gain? Here’s a look inside the complicated nature of corporate support of Pride Month. 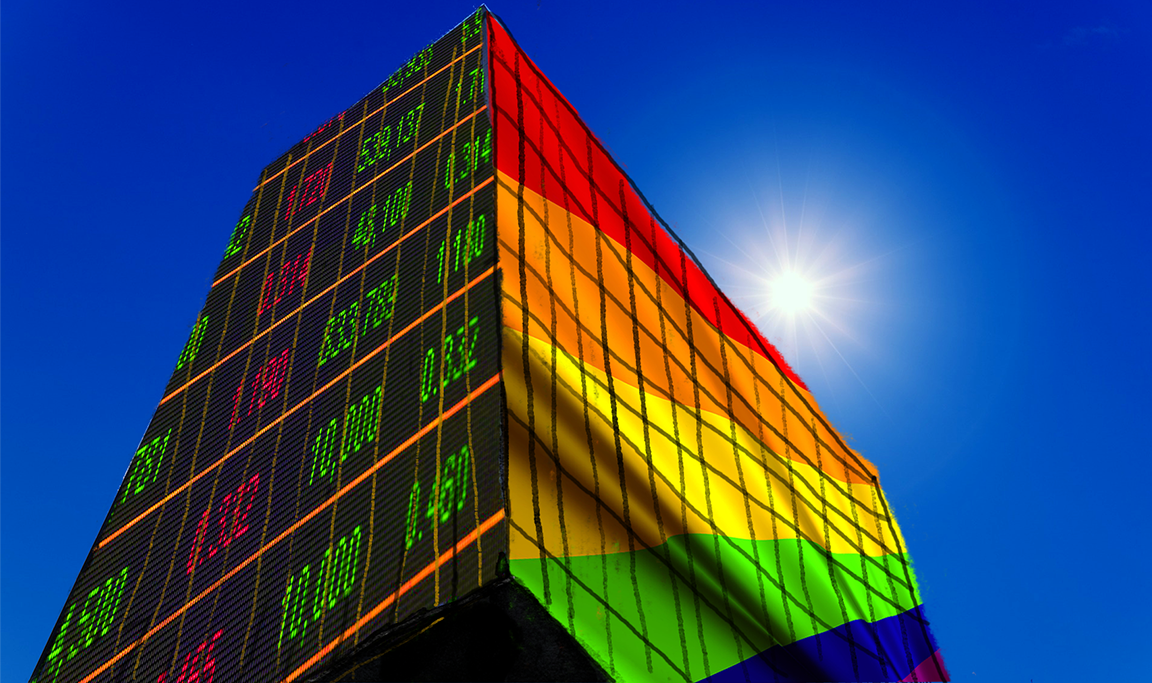 Adorning Halsted Street in a brilliant display, Boystown’s new rainbow crosswalks are a festive and inclusive addition to the “gayborhood” that were unveiled just in time for Pride. The colorful crosswalks, which run north from Melrose to Bradley, lead the way for those marching in Chicago’s Pride parade, which commemorates the 50th anniversary of the Stonewall Riots in New York in 1969.

Boystown, the first officially recognized gay village in the United States, becomes awash with rainbow each June, marking the beginning of Pride Month. During Pride Month, cities across the globe host festivals, marches, and parades to celebrate LGBTQ identity. Rainbows have long been a symbol of the community, and wearing rainbow or toting a rainbow flag is a popular way to show support.

Beyond Boystown, Pride displays can also be found in advertisements and product logos as corporations express support of Pride Month. Many mega brands have launched pride merchandise this year, including Levi, Nike, Converse, Reebok, Gap, Calvin Klein, J. Crew, Under Armour, and DKNY. Playboy revamped their classic bunny ears to show support of Pride. The collection was designed by seven queer artists as a part of Playboy’s “Pride is Good” campaign.

Chipotle released a line of Pride merchandise for their  “Love What Makes You Real” campaign that includes a T-shirt featuring an image of a burrito wrapped in rainbow foil. “Our food is real and so are we,” the Chief People Officer at Pride, Marissa Andrada, said of the campaign. “We are cultivating a better world by encouraging people to be their full selves and celebrating everyone – basic, extra and everything in between.”

Nearly forty years ago, Absolut became the first spirits company to release a rainbow bottle in celebration of Pride. The original bottle was made in collaboration with Gilbert Baker, the designer behind the original Pride flag, and they have released limited edition Absolut Rainbow Edition every year since. A blurb on Absolut’s website urges, “Consume what’s on the inside moderately, but please be anything but moderate when spreading the message on the outside!”

The surge of LGBTQ-directed marketing in recent years can be traced back to Absolut. In 1981, at the beginning of the AIDS crisis, Absolut published advertisements in The Advocate and After Dark — both gay culture magazines — which was unusual for a major corporation to do at the time. Since then, Absolut has staked out a presence in the LGBTQ community. A New York Times article written by Stuart Elliot details Absolut’s efforts: “Those first Absolut ads were later followed with events in bars, donations to charities and causes, outdoor advertising and, most recently, sponsorship of a series on the Logo cable channel, ‘RuPaul’s Drag Race.’”

By the 1990s, advertisers started to realize the market potential of the LGBTQ community. Blaine J. Brainchik, a marketing professor at Quinnipiac University, notes that a “1977 market survey found that the average income for readers of The Advocate, a gay magazine, was about 50 percent above the national average.” Recognizing the purchasing power of double-income gay households, corporations started to follow Absolut’s lead. IKEA hit a milestone in 1994 when they became the first company to air a commercial featuring a gay couple. Each year since then, more and more brands have jumped on the rainbow bandwagon.

Trak-Ellis Hill, the creative director at the content sourcing company Mofilm, argues that “brands have such power to influence.” She goes on to ask, “Should it be the duty of brands to reflect the different kinds of people who make up their audience? To contribute to meaningful and positive sociocultural change, to promote acceptance by simply featuring lesbians in some of their communications, to dispel tired and harmful stereotypes, to show the many ways we are all connected, are all the same, despite the differences that really don’t matter? Yes.”

To Hill, representation of the LGTBQ community in advertisements is a stepping stone towards inclusion and acceptance. Brands have a platform through which they can promote equality to a wider audience.

However, not everyone agrees that a rainbow bottle of vodka can contribute to meaningful sociocultural change. Kemi Fatoba, writer and co-founder of DADDY magazine, argues that “among the many brands that support Pride, there are only a few that genuinely care about all the members of the LGBT community by making real efforts to be inclusive within their own structures.” Fatoba draws a distinction between proclaiming support of Pride and supporting the LGBTQ community in tangible ways. Adopting a rainbow logo, for example, may not be enough.

Sometimes brands’ attempts to show support fall flat. Last year, Nike released a line of apparel and sneakers for Pride called “BeTrue.” A pink triangle was featured in the sneakers’ design. The pink triangle, originally a symbol used by Nazi Germany to identify gay people, has been reclaimed by gay rights organizations such as ACT UP. ACT UP took issue with Nike’s use of the triangle, claiming that Nike “[appropriated their] messaging for profit.” Nike also received criticism for their 2017 ad which proclaimed, “Equality has no boundaries.” Critics were quick to point out that Nike’s use of sweatshop labor was at odds with their message of equality.

No Justice, No Pride, a D.C. based activist group, has been critical toward the relationship  between corporations and Pride. In 2017, Capital Pride was sponsored by Lockheed Martin, a global security and aerospace company, and the company’s float in the parade featured a model of a warplane. To Emmelia Talarico, an activist from No Justice, No Pride, this seemed contradictory. “Pride started as a commemoration of visionary trans women of color taking a stand against state violence. Today, Pride celebrates the very entities that continue to perpetuate violence against our communities,” Talarico told Vice.

One corporation’s Pride branding stood out among the sea of rainbow logos: Skittles. In 2016, Skittles abandoned their rainbow color scheme and offered white Skittles in a white package for Pride month in the UK. “During Pride, only one rainbow matters,” the Skittles package claimed. “So we’ve given up ours to show support.” Some considered this choice tone-deaf and exclusionary, while others lauded Skittles’ shift in focus away from their own brand, and towards the LGBTQ community. Regardless, Skittles’ Pride packaging does raise questions about what brands have to “[give] up” when they show support, and what they have to gain.

The relationship between the LGBTQ community and corporations has changed quite a bit since Absolut debuted its rainbow bottle in 1981. Inclusive advertising is no longer a rarity. This could reflect a widespread shift in how the LGBTQ community is perceived, or it may stem from the chase for the pink dollar. While it may be encouraging to see festive displays of Pride in stores all June, it’s important to consider what it might look like if brands supported the LGBTQ community in more ways than adopting a rainbow logo.