In our Artstagram article from September, you got all the hot goss on shiny artist Instagrams. For part II, here follows 10 of the best art world Instagram accounts by non-artists in all the land.

In 2011, curator, writer, and social media star Kimberley Drew started the tumblelog Black Contemporary Art, which focused on black art and artists. She is now the social media manager of The Metropolitan Museum of Art in New York, having previously worked at the Studio Museum in Harlem and Lehmann Maupin New York. Follow her Instagram to glimpse into the life of an art world darling, journeying with her through not only the Met but most big art-world events.

I have to admit, this account has been inactive since 2015. But the 135 bangin’ art memes it posted before then make a cheeky visit well worth it. Not pulling any punches, highlights include a meme captioned “Dan Rees has a show at Tanya Leighton more often than most Berlin artists actually go to their studios.” Sick burn.

Why are all the best art meme accounts dead? I was born in the wrong generation. At only 62 posts, STIMULI has been inactive since 2017, but the content that remains is worth a read.  However, the account posted an ambiguous instagrid earlier this year that gives me (probably false) hope that it will return in #2019. For the moment, my personal favourite is their “straight-white-gallerist on holiday starter pack.” Need I say more.

The great US artist and educator Loïs Mailou Jones was born 3 November 1905 in Boston, Massachusetts. (She is seen here working on cretonne textile designs in a c.1927 photo recently discovered at the Howard University Archives.) As a child, her parents encouraged her interest in art; during high school she enrolled in evening classes at the Boston Museum of Fine Arts; she then worked as an apprentice in costume design and had her first show at the age of 17. She continued her education over the next few decades, eventually graduating from Harvard in 1945. In 1928, she founded the art department at Palmer Memorial Institute in North Carolina; she then worked at the art department at Howard University in Washington D.C. until she retired in 1977. In 1937 she was awarded a fellowship to study in Paris at the Académie Julian for a year. Of her time in Paris, Lois remarked: 'The French were so inspiring. The people would stand and watch me and say 'mademoiselle, you are so very talented. You are so wonderful.' In other words, the color of my skin didn't matter in Paris and that was one of the main reasons why I think I was encouraged and began to really think I was talented.' She married the Haitian artist Louis Vergniaud Pierre-Noel in 1953 in the South of France; they lived between Washington and Haiti. Her 1938 painting Les Fetiches, now in the collection of @smithsonian, is an important work of the French 'Négritude' movement, and the first of her paintings to combine traditional African forms with Western ones. From the 1940s on, Lois exhibited widely in the US and in 1952, a book on her work was published. Lois said that her main contribution to art was that she was 'proof of the talent of black artists' and that 'the African-American artist is important in the history of art and I have demonstrated it by working and painting here and all over the world.' Lois Mailou Jones' work is in major museum collections including @metmuseum @smithsonian @mfaboston She died in 1998. #bowdown #loismailoujones

On her personal account, Jennifer Higgie, editorial director of Frieze, posts an image and biography for a spectacular woman of art history every day. She last posted yesterday so I promise it’s not another inactive ‘gram where we are forced to wax nostalgic about past posts. Artists featured over October alone include French painter and writer Louise Abbeéma, American quilt-maker Harriet Powers, American classical sculptor Harriet Hosmer, and British surrealist artist and writer Margaret Ithell Colquhoun. Give a cheeky follow and learn neglected art histories via osmosis.

Ooh, fake out! No fetch today and even more drafts ?#clearingthedrafts #chocolatepom #pomeranian

A regular staple of art fairs around the globe, Bertram the Pomeranian is the pet of The Hole NYC’s Director Kathy Grayson. Follow this Insta to see the art world from a dog’s-eye view. Also he’s just really, really cute. I highly recommend you watch an Insta story of him running; it shall make your week.

? #LuisBarragan color story ? Barragan’s iconic style of emotional architecture is immediately recognizable by his bold use of color. His pinks are pre-Hispanic: colors found in the native communities of Mexico before the colonists arrived. The walls of Cuadra San Cristobal get repainted every three years to maintain their original vibrancy ✨

My hero for a number of reasons, including her long-term rocking of the bowl cut, Jiajia Fei is the Director of Digital for New York’s Jewish Museum. Before that she worked as Associate Director of Digital Marketing at the Guggenheim. Like @museummammy, Fei’s insta is a beautifully curated combination of artworks, art events, and the general business of cool NYC people.

?this week’s review is up!? talkin bout @joylabinjo’s Recollections @ @tiwani_contemporary – n our last text of 2018 ???

I’m always suspicious of art critique platforms hailed by the Guardian as the most cutting-edge thing since sliced bread, but The White Pube indeed follows through on their goal of calling bullshit on the art world. An art criticism platform that operates across Instagram, Twitter, and their very own website, The White Pube was developed “because everything else was boring/overly academic/white nonsense////and male.” For three years now they have been delivering internet colloquialism-laden honest reviews of exhibitions around the UK. Check it out and keep it real.

Thanks for watching Bob's movie at @thearmoryshow ?

Okay, you got me, I sneaked an artist into this list. But it’s because, imho, Amalia’s Instagram has a bad rap for that whole fake life thing, which tbph is probably one of the least interesting things Ulman has done anyway. I’m also eternally melancholic that apparently she was going to come speak at SAIC some years ago, before she got famous, but then she got famous and it never happened, and perhaps never will. Her current Instagram is preoccupied with a delightful obsession with pigeons and the color red, 10/10 for you, Amalia Ulman. You go, Amalia Ulman.

An instagram dedicated to accessory close-ups in classical paintings. Who could ask for more? Check out the ruff on “Portrait of a Lady with a Ruff” by Michiel van Mierevelt. Also maybe that lady is Julia Roberts? Take a look and decide for yourself. The beautiful “The Knight of the Flowers” by George Rochegrosse, in which a field of flowers is mirrored in the titular knight’s armor, is another highlight for me.

Delacroix’s sources. Included in the Promised Gift of Karen B. Cohen to The Met, these two sketches by the French Romantic painter Eugène Delacroix (1798–1863) are on view in the Devotion to Drawing exhibition at The Met Fifth Avenue (Galleries 691–693). Dated to about 1825-30, they represent funeral effigies which Delacroix would have perhaps only known through their printed representation. The source(s) he would have consulted are unknown, however. The effigies, by contrast, may be identified without much difficulty. The first one is that of Giannone Caracciolo (d. 1411) in the church of San Domenico Maggiore in Naples. The other is of Jean/Giovanni of Anjou, (d. 1335) in the same church. Why did they attract Delacroix’s attention? Both exhibit a feature that, by medieval European standards (but perhaps not so much by those of medieval Naples), may be said to be rather unusual; namely pauldrons (shoulder defenses) taking the form of masks. Could they have sparked his interest? There are famous Renaissance armors with such details (one in the Royal Armouries, Leeds, another in the Real Armeria, Madrid, to mention only a few), but nothing of the like on extant medieval armor—as far as I know. And yet, the concept for such pauldrons surfaces in paintings and sculpture of fourteenth-century Italy, and I see no reason to doubt that actual pieces of armor in that fashion were made not too long thereafter. I wonder whether Delacroix, who seems to have liked to study historical artifacts before using them in his pictures, ever drew inspiration from these two studies. Fortunately, for those willing to wait, there is a retrospective exhibition of his oeuvre coming up very soon, which will open at The Met on September 17! #metarmsandarmor @metdrawingsandprints #delacroix #naples #funeraleffigy #romanticism #sortingthingsout

On the private account of Pierre Terjanian — Arthur Ochs Sulzberger Curator in Charge, Department of Arms and Armor at The Metropolitan Museum of Art — each arms and armor-related image is accompanied by a fascinating and niche caption relaying tidbits you’d have to study medieval culture rather intently to come across. It’s lucky we have Pierre Terjanian here to keep us in the know. Want to learn about novel armor helmet design trends in the 17th century? Or Delacroix’s interest in pauldrons (shoulder defenses) that take the form of masks? Look no further. Thank you, Pierre Terjanian, for all you have done and continue to do. 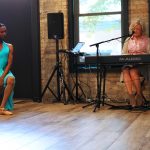 The Art of Healing at Youth Empowerment Performance Project