Ten Mildly Spooky Artworks at the Art Institute of Chicago

Prepare to be slightly scared. 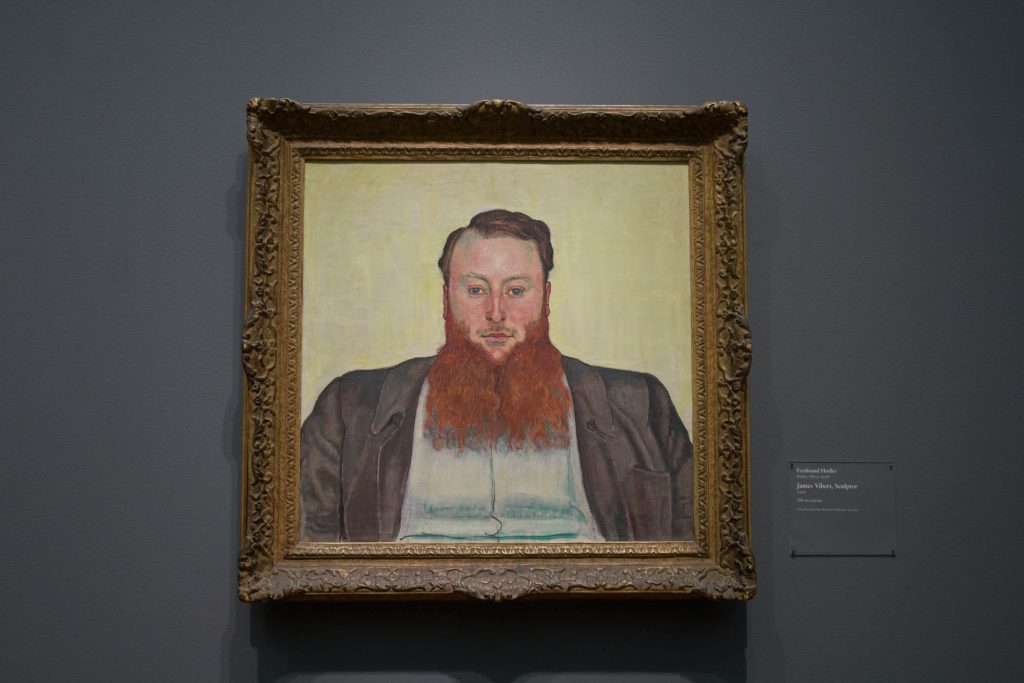 Halloween is coming, and you know what that means! Spookiness, basically. We’re going to be seeing a lot of freaky cats and malevolent pumpkins before long. Maybe you’ve already seen some — lucky you. But if, like us, you’ve got an insatiable appetite for seasonal fear, here’s a guide to eeriness in the Art Institute of Chicago. 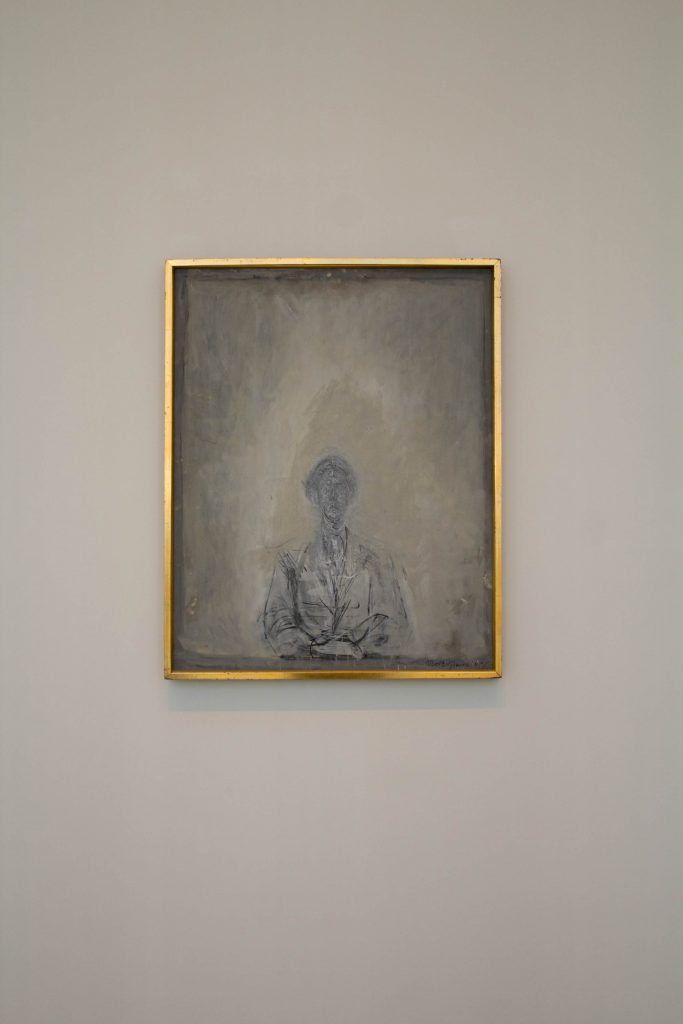 Death by gray. A solitary man sits in a prism of isolation, his body barely constrained by its borders. Giacometti doubles all the man’s features; his head, in particular, has at least two apparent domes. Apart from his suit’s crease-lines, his body is little more than a smudge. Consummate desolation: a body subsumed. 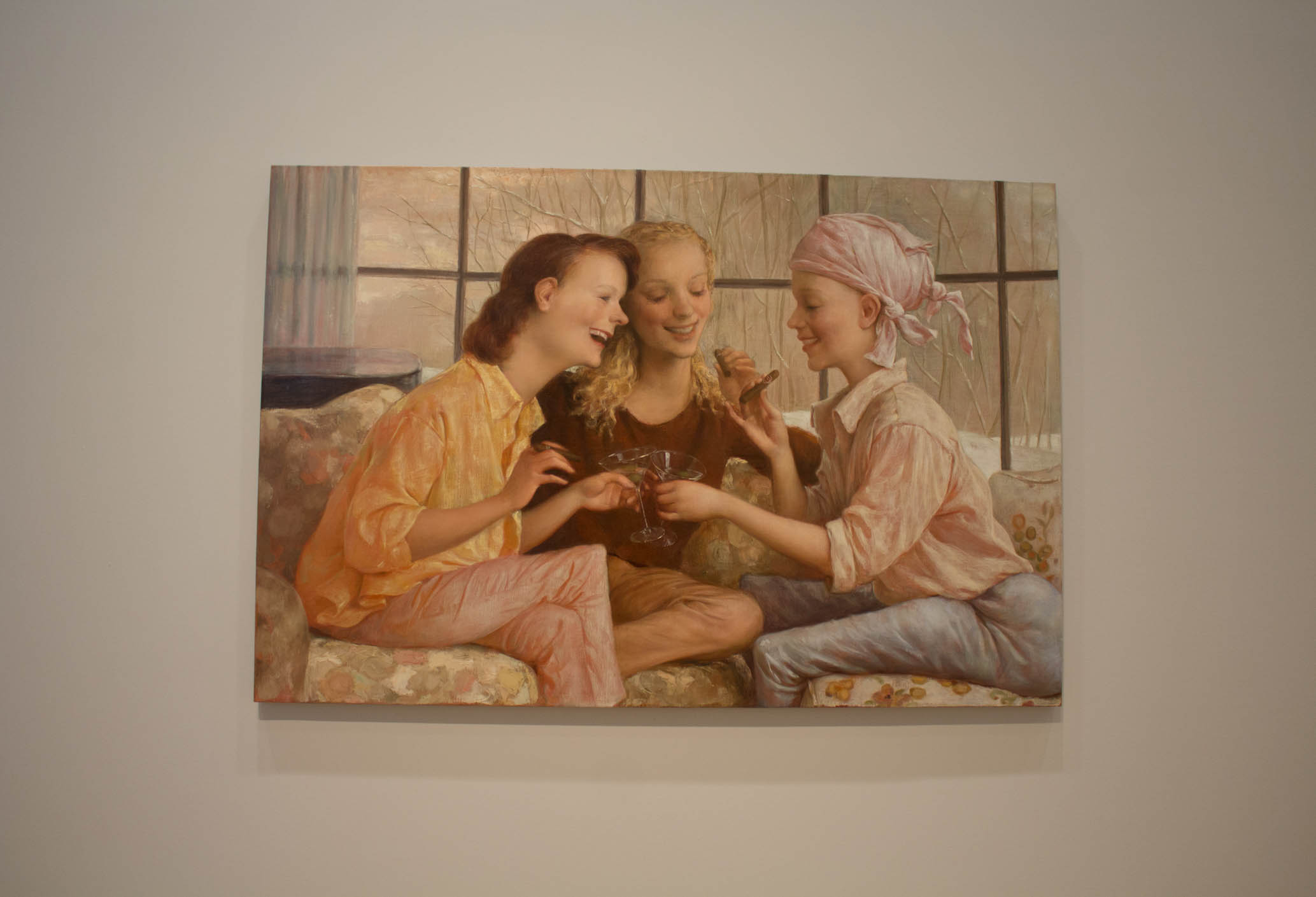 It comes on pretty normal: you look first at the faces, which are, in and of themselves, only a little strange. Look down. The legs don’t make any sense. The rightmost woman, in particular, looks like she’s wearing an overfull diaper. The leftmost woman’s are too thin, too angular, not right. Once the bodies make this point, the faces’ naked joy seems suspect. The barren, wintry landscape behind the women suggests sorrow, but their martinis and cigars are celebratory. Either these women know something we don’t, or they fail to see all that shocks us. 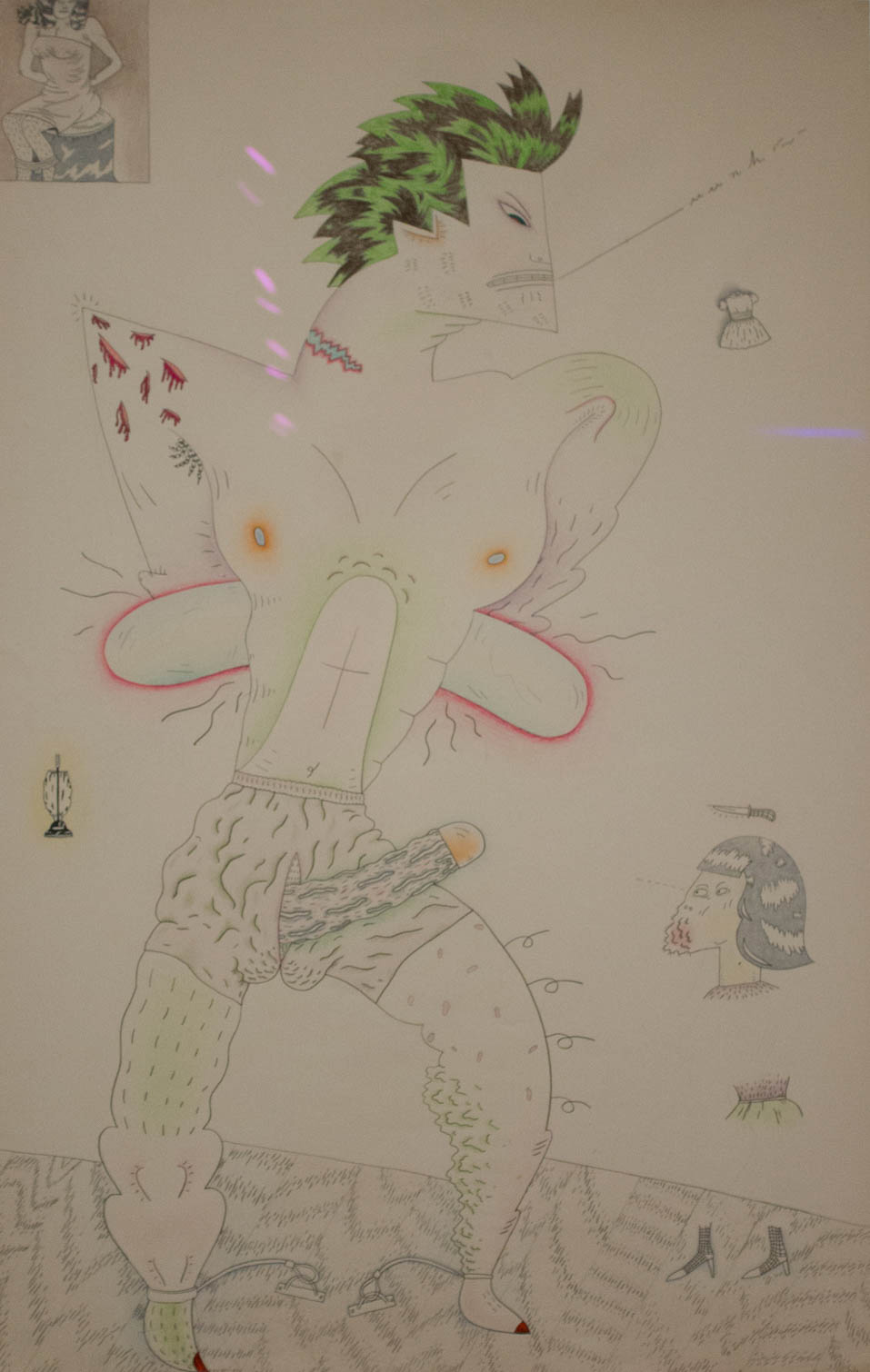 A cartoon man dressed in only scrotum-textured gym shorts looks down on his protruding penis in anger. Bloody cuts litter his right shoulder; his neck looks fatally gashed. He mutters something incomprehensible. In the bottom right-hand corner, a woman glares at the phallus, a knife hovering above her head. Violent sexuality, the first incisions already made; you know what happens next. 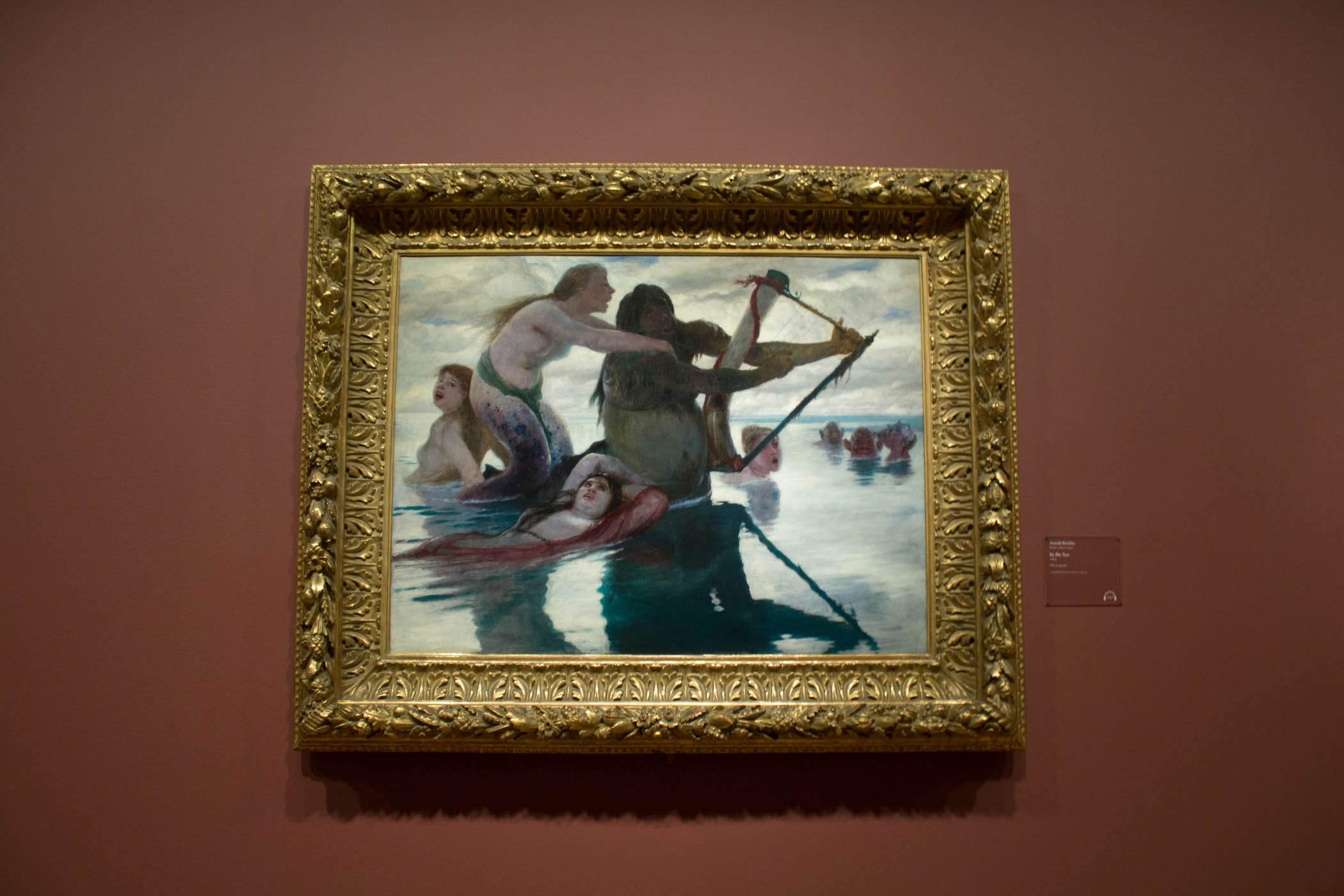 Arnold Böcklin – In the Sea. Photographed by Lilly Mather.

A harp-playing triton drags mermaids through the ocean. Stage right, some gremlin-like sea creatures watch in morbid amusement. The triton is committed to his harp, his eyes cast upward and mouth ajar in what one assumes is a desperate plea. The closest mermaid clings to his waist, another grasps his collar; all stare agape at whatever sinister thing approaches. The collective fear makes their every effort appear doomed. 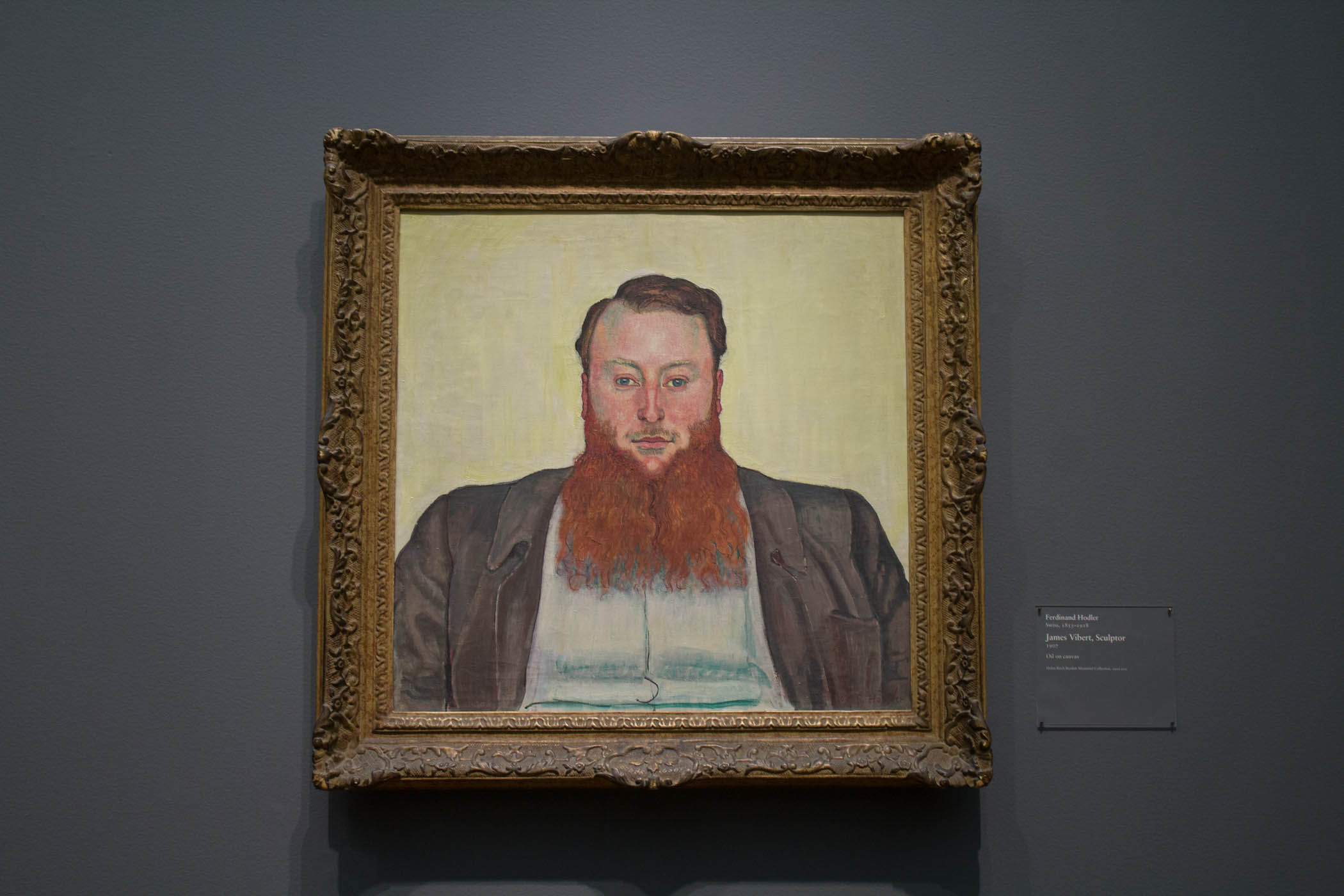 What’s creepy here is how directly Vibert’s body points at the viewer, but how little his eyes do. His posture’s steadfastness and his facial expression’s odd enchantment make his eyes’ asymmetry deranged. He’s broad-shouldered and thick-bodied, so whatever he intends to do, he’ll do it forcefully. His beard might crawl off his chin and strangle you. 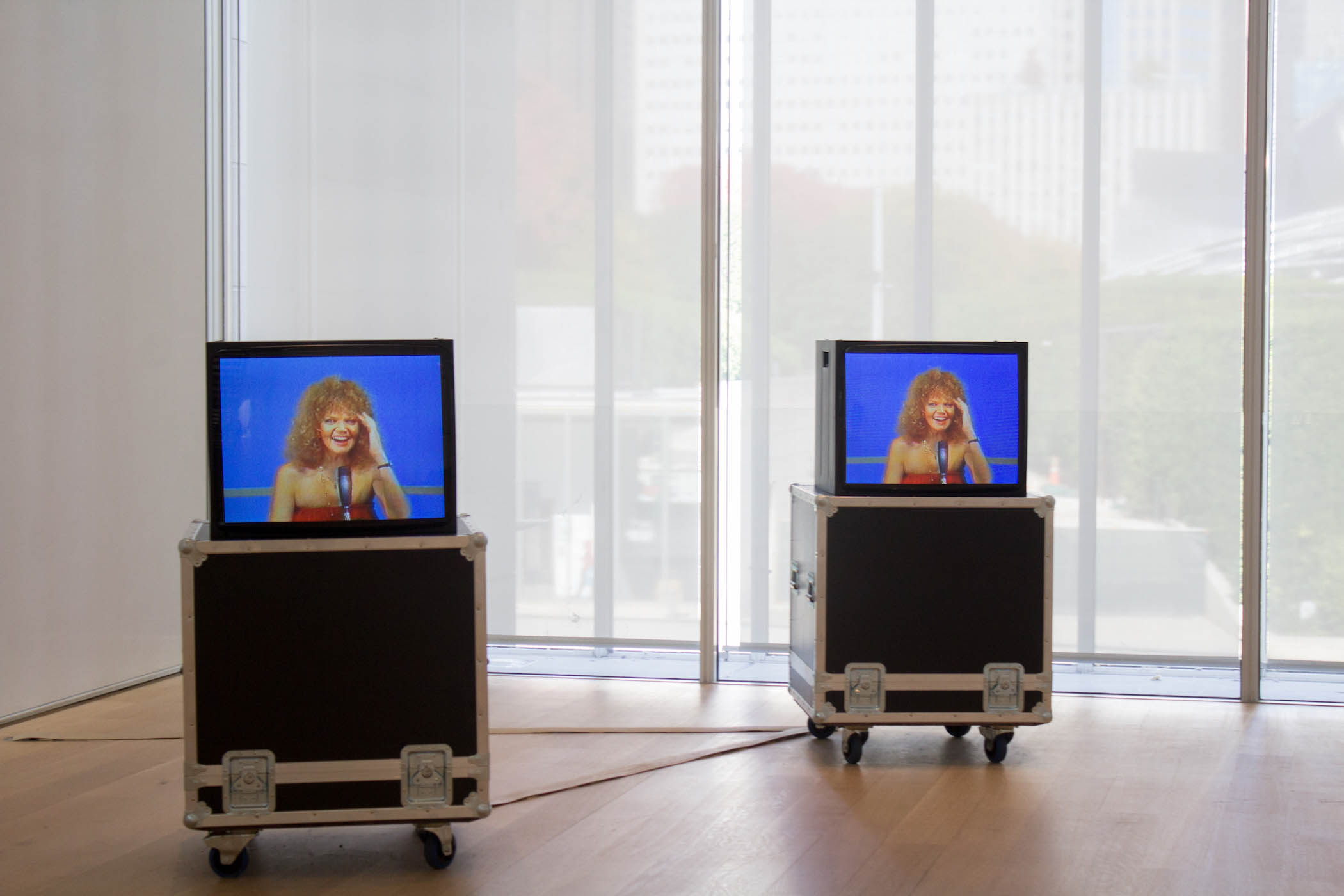 A few seconds of the game show “Hollywood Squares” cut up and collaged over disco and low, low, low-fi disco covers. The video content focuses mostly on three women’s reactions to being introduced. Their expressions contain a discomfiting mixture of ecstasy and insecurity, an effect compounded by constant repetition. The soundtrack’s most memorable refrain is Dori Levine’s disoriented, 8-bit cover of “Georgy Porgy”: “Georgy Porgy, puddin’ and pie, kiss the girls, and make them cry.” By repeating these images over freaky audio, Birnbaum transforms innocuous introductory gestures into painful manifestations of sexism in entertainment. 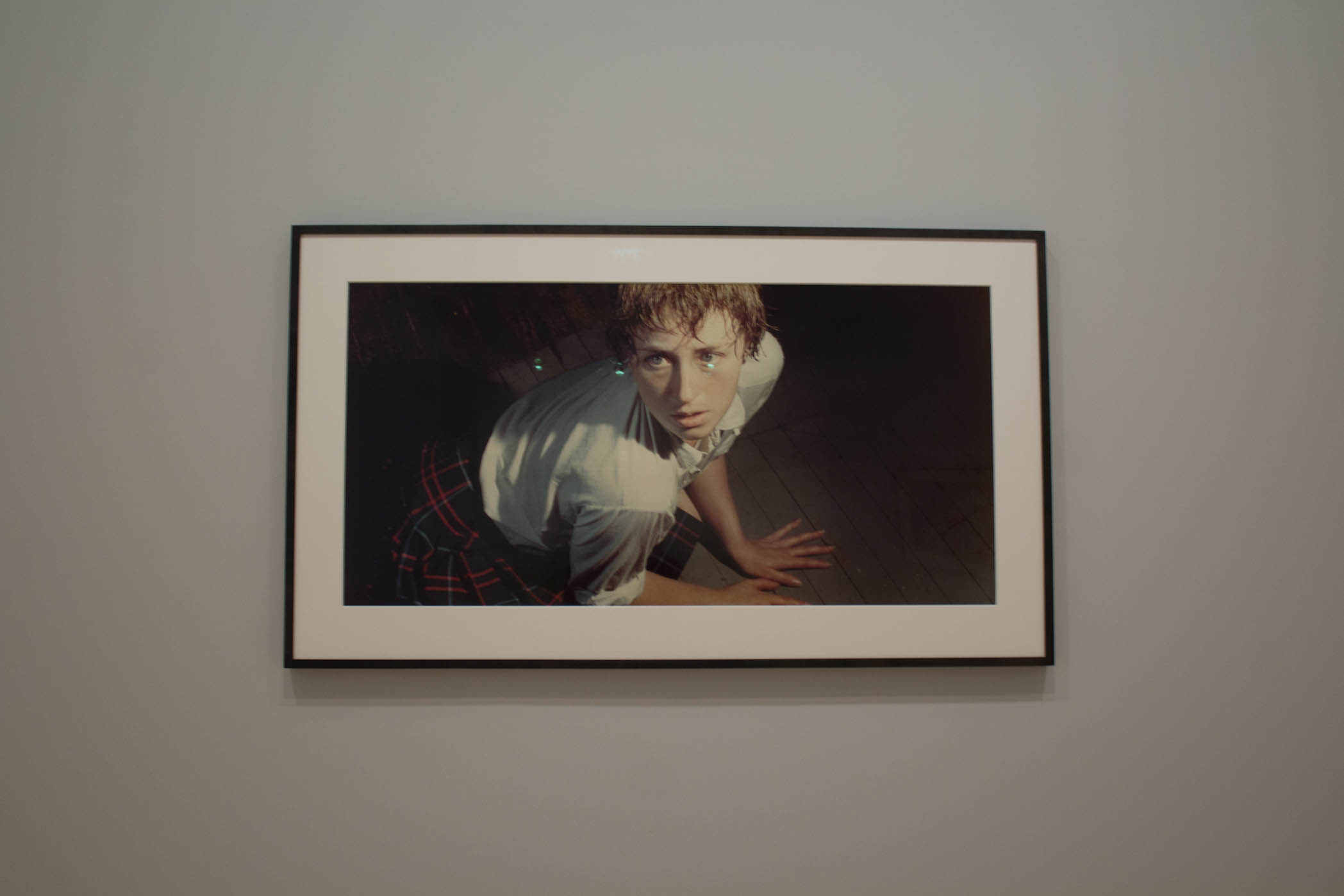 In each image, something out-of-frame causes severe reactions in the subjects: defeat, paralysis, horror, offense, and longing, to name a few. In “Untitled #90,” a telephone refuses to ring, sending a woman into a catatonic state. In “Untitled #96,” an otherwise smartly dressed and healthy woman lies on a kitchen floor, heavy-lidded and immobilized. The more images you see, the more you sense an unseen culprit, hellbent on terrorizing women. 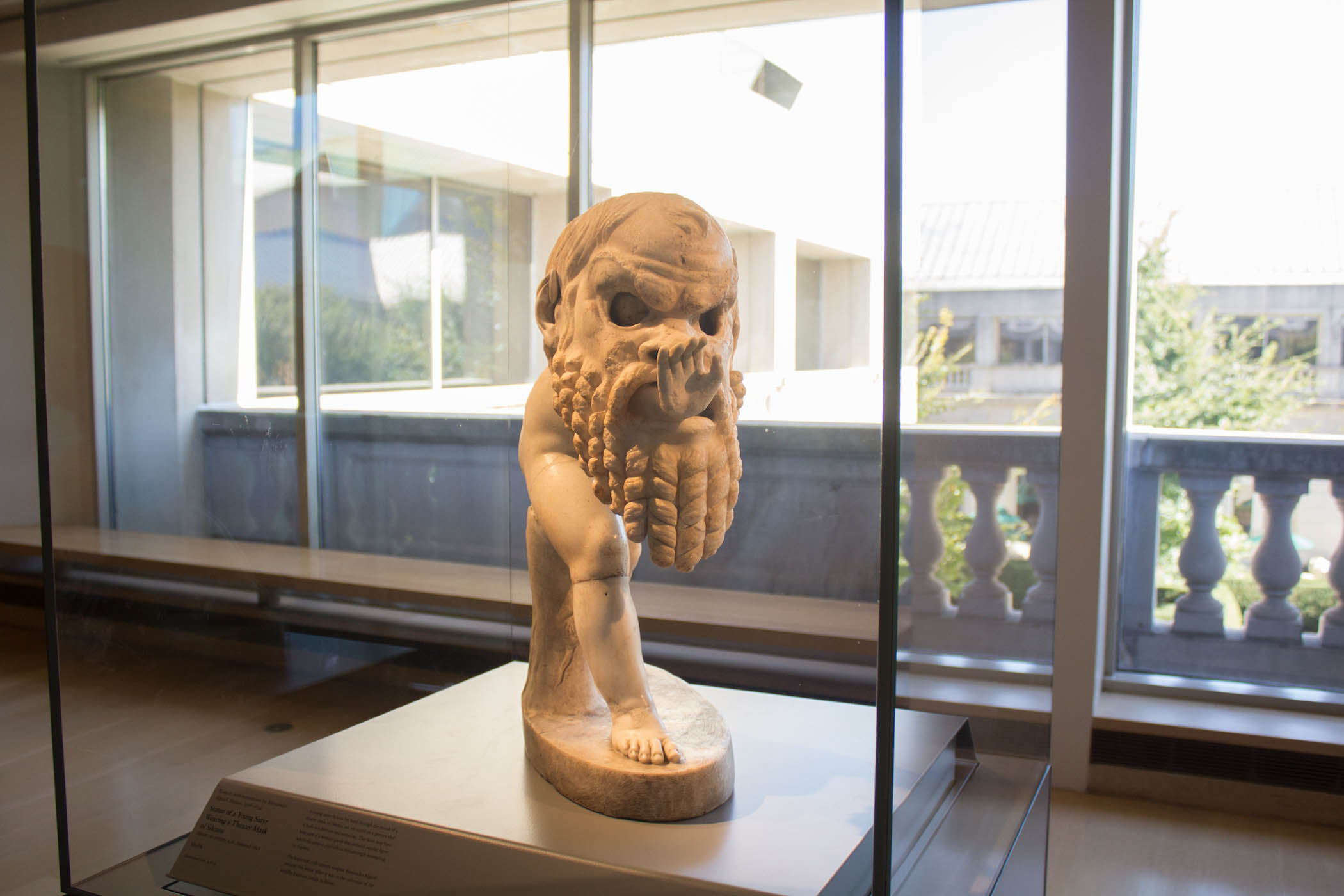 Anonymous – Statue of a Young Satyr Wearing a Theater Mask of Silenus. Photographed by Lilly Mather.

I know it’s a mask, but the uniform limestone color makes it seem more like a severed head. So you have this juxtaposition of playfulness and violence. The young satyr sticks his hand through the mask’s mouth, making the head look like some relative of Medusa’s, with little hands instead of a tongue. It posits a darkness intrinsic to playfulness: childlike hysteria is as sinister as it is amusing. 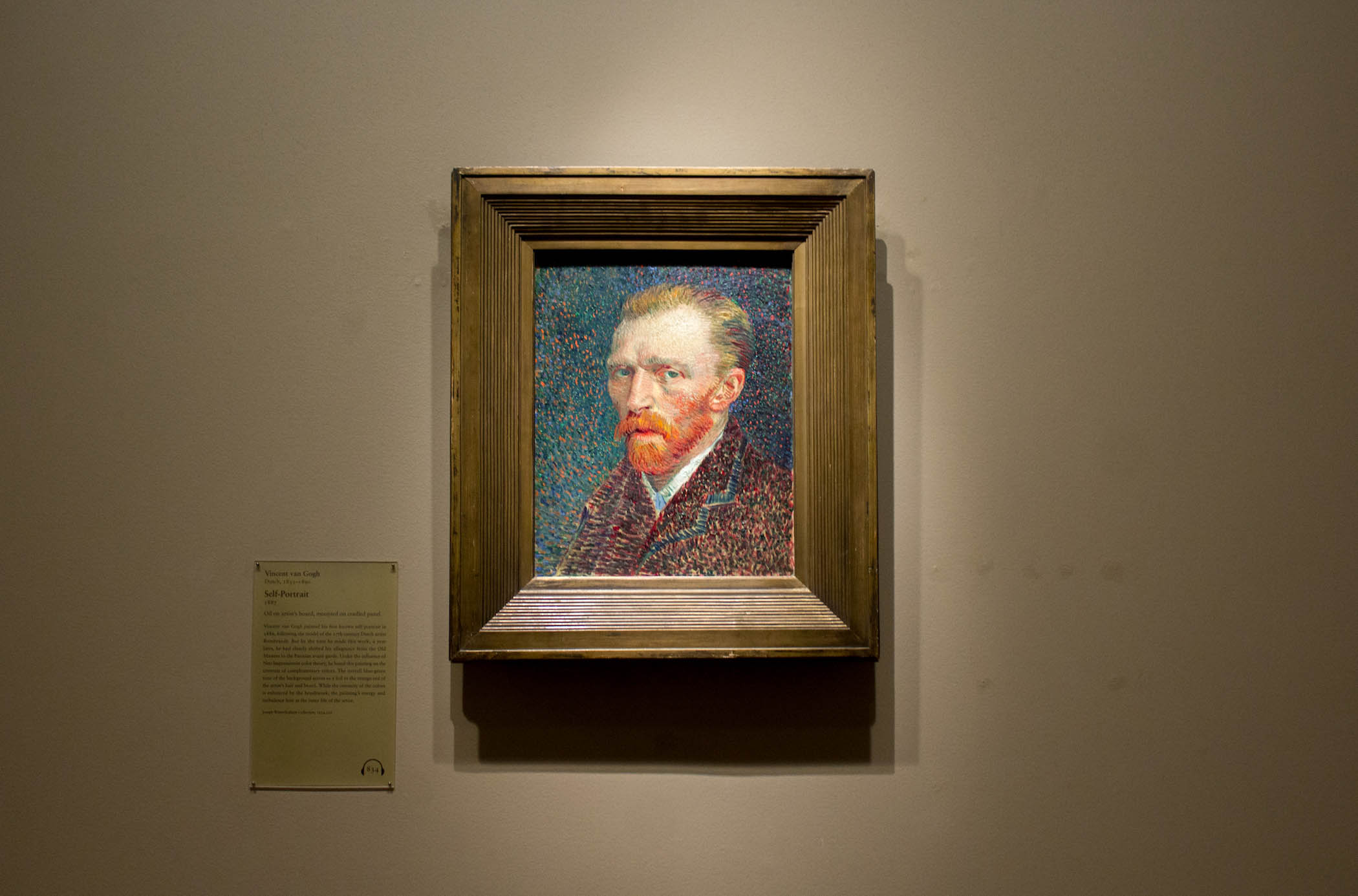 Van Gogh was famously unfamous during his lifetime, and as a result became psychotic and self-hating. In this self portrait, his opinion of himself is never on fuller, rawer display. Red tinges everything: his eyes, his skin, his jacket, his beard, his hair, the background. It indicates the artist’s artistic desire, only too easily transfigured into self-destruction. What is that expression? Weariness, mistrust, sadness, hope? And what is the proper response? Do you shun this man, who seems to have lost the reins completely? Or do you invite him in? 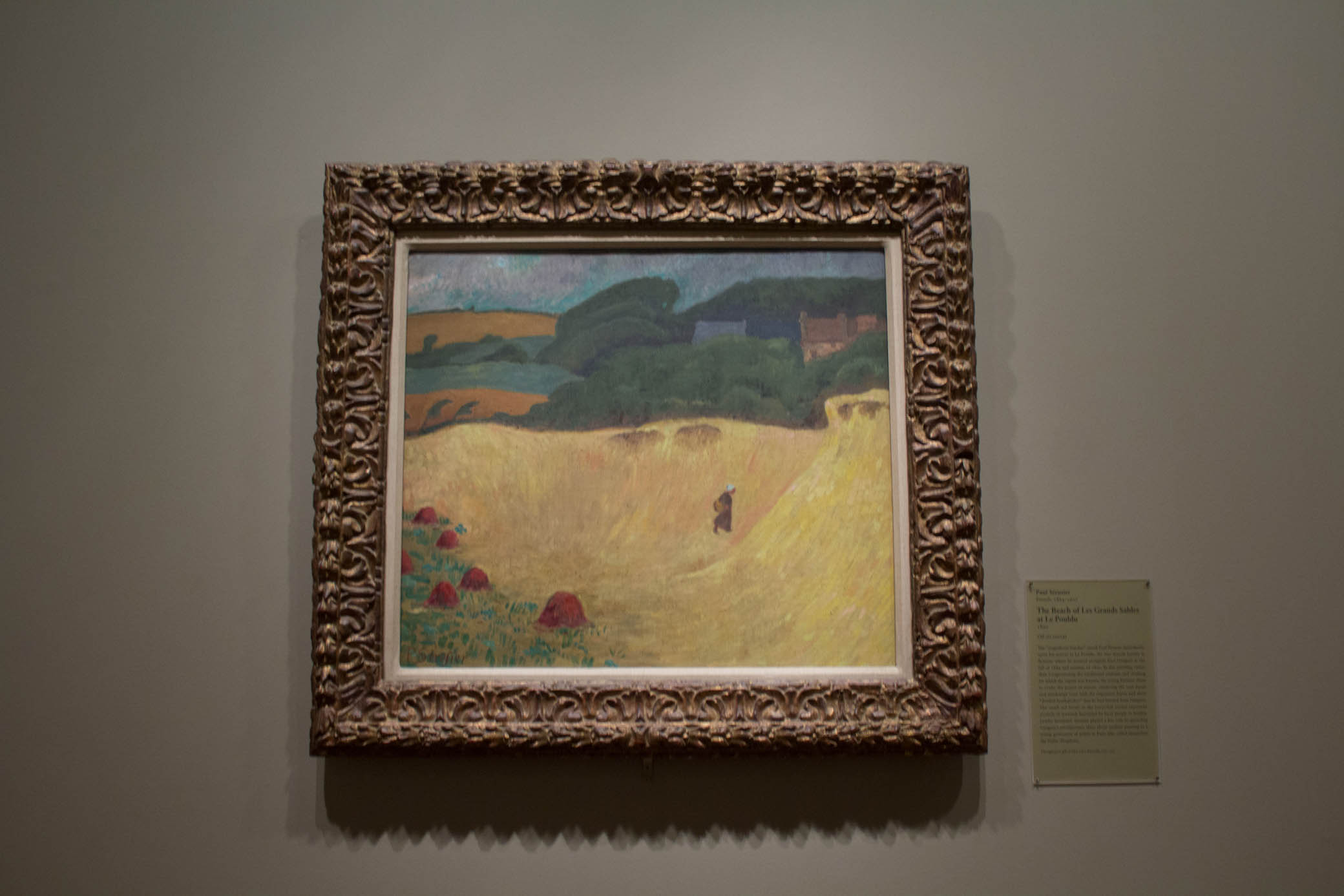 Another case of expansive desolation. The view goes on for miles; in the upper left, green and brown plains reach toward the horizon. A woman in the center seems finished with her day’s work, walking matter-of-factly toward the tree-hidden houses. But her path is impossibly steep. The dunes seem impassable, and there is no one else there to help. You imagine her feet falling through the crumbling sand, helpless in the absence of a foothold. Even so, she seems resigned to her fate, not desperate or beseeching. Such fatalism may be the creepiest feeling of all. 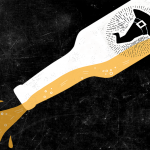