When the music stopped and everybody shuffled toward the exit, avoiding the guy tripping out in the grass, I heard a chant of “Riot Fest sucks!” And this time, I agreed. 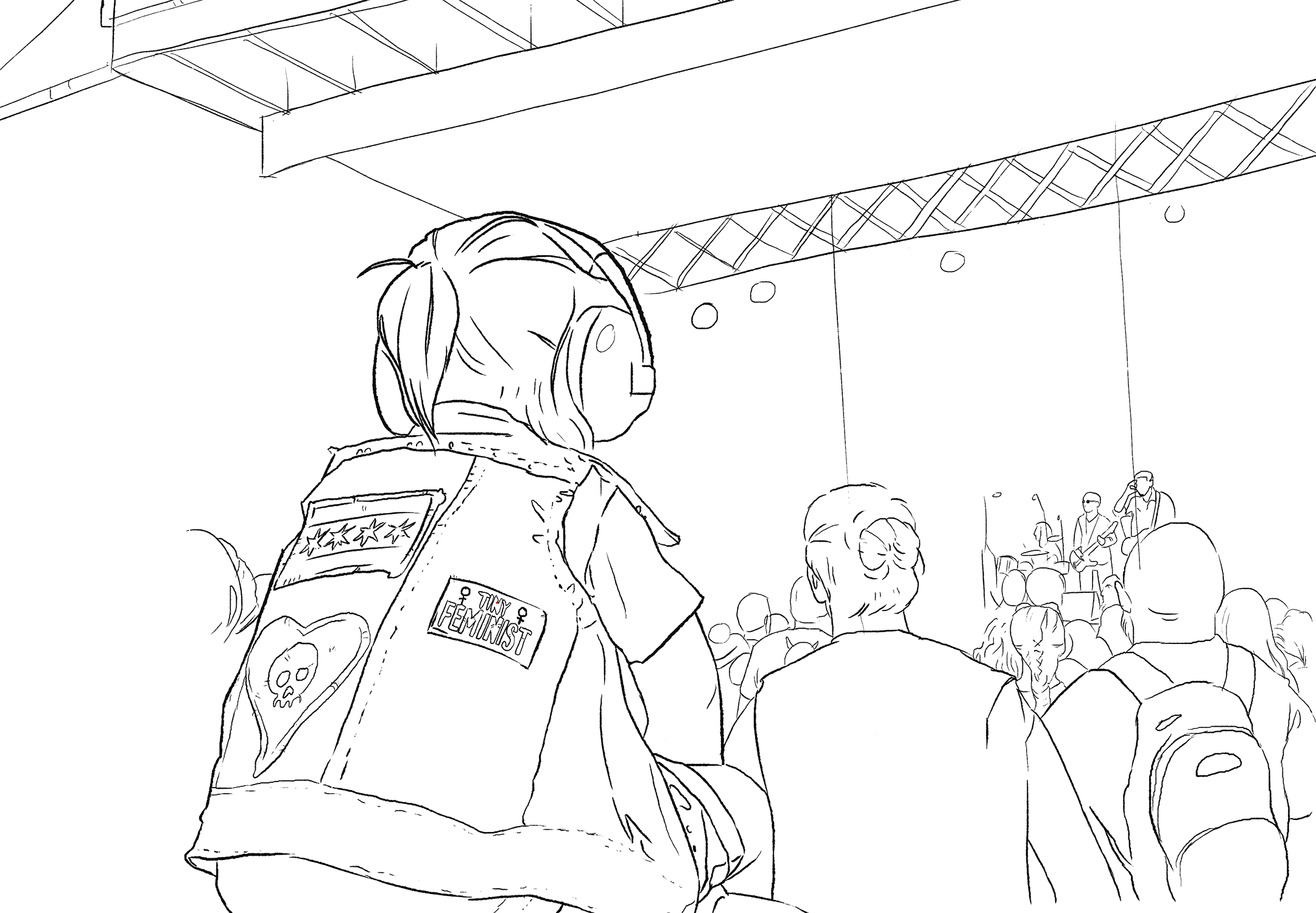 When my friends first asked if I wanted to go to Riot Fest I actually laughed out loud. Any band that I recognized from the lineup I hadn’t listened to since high school and I am definitely not hip with the punk crowds anymore. Since my darker high school days spent listening to to alt-rock and smoking with the band kids, I have evolved into more of an EDM girl.

The electronic dance music scene is a lifestyle curated by DJs, focused mainly around raves and festivals. Although it’s not just the music that makes the culture. Bright clothing, intense light shows, an excess of glitter, and lots of stimulants are also markers of EDM culture. When it comes to spending the night out, I’m more about glitter and dancing than eyeliner and mosh pits. But eventually curiosity got the best of me. My friends wouldn’t stop talking about the festival, plus Blink-182 (the original Friday night headliner) was replaced by Weezer. I bought a one-day ticket for Friday, my expectations tenuous to say the least.

I decided that in order to infiltrate the punk scene I needed to blend. With ‘90s music videos in mind, I cut a hole in the crotch of my fishnet tights, pulled them over my head like a shirt, paired that with a plain tank/black leggings combo, and added some safety pins for good measure.

Upon entering the festival I realized that I do not, in fact, blend in as punk. It was obvious that the alternative/punk scene hates “try-hards” more than anything else. Anybody trying harder than a t-shirt and ripped jeans sticks out. This mentality is embodied by Riot Fest’s unofficial slogan “Riot Fest sucks.” It’s cute, but apathy has never really been part of my vocabulary, so I was already turned off.

I was only able to catch the end of The Front Bottoms set. It’s a band that was introduced to me by the first kid in my hometown to get his ears gauged. Their set gave me pleasant flashbacks to nighttime drives, and being up to no good with my friends. The angsty lyrics and folky sound won me over, aided by the live violin and charisma of Brian Sella. I couldn’t help bobbing my head along with everybody else. I sent a text to my old best friend, “how’ve you been lately? <3.”

I tried to talk to as many people as possible during daylight hours. I noticed it’s much harder to strike up a conversation at Riot than any of my usual EDM festivals. This may be because of my failed attempt to blend, the standoffish attitude that seems to permeate the scene, or even the lack of Molly going around. I did manage to talk to a couple twenty-something girls who told me they haven’t really been part of the this scene since high school either. They told me that’s probably the case for most of the crowd, but they are eager to be part of the “new generation” of punk. One girl points to her very pregnant belly “and breed them too!” Chasing nostalgia seems to be a prevalent component of the festival.

Eventually I made my way over to watch Matt and Kim at the Roots stage, a band that I’m not really familiar with but who put on a fun show nonetheless. They’re pop-y with a cute edge, characterized by dancible synth melodies. During their set I experienced my first mosh pit (or circle of death maybe? Somebody please explain the difference to me). All I know is that there were a bunch of people running and shoving each other directly behind me. I asked my friend about it later and she shrugged and said, “it’s about the chase of adrenalin and letting aggression loose.”

By then it was time to see Young The Giant, a group I was really looking forward to watching. The band immediately took over the stage. Their presence was electric. A mosh pit formed and I understood the energy that underscored it, happily watching from the outskirts. When the first dreamy chords of “Cough Syrup” came on the crowd went wild. It’s a fan favorite song about yearning to break free from the mundane. The song is sad and wistful while maintaining a catchy melody. I definitely had one of those spiritual, musical moments where you can feel the love from everybody around you. Still the most magical moment of the night was when Sameer Gadhia pulled out a cowbell and somehow managed to make it a sexy instrument (yes really). Who knew some well timed mallet clangs and hip thrusts could make me weak at the knees.

Next up is was Weezer. I was all hyped up and turned on coming from Young The Giant and I really wanted to like the set, but my mood quickly died down. The set felt tired. The only thing keeping me going at this point was the cute dance partner I acquired and the novelty of hearing classic songs from the legend (Rivers Cuomo) himself. They won back my love with their cover of Toto’s “Africa”, to which I sang along with every word.

I’ll admit that I went into Riot Fest biased against it and there was no reason for me to feel like I did not belong. Like any other festival this Riot a place where people can let loose; hear their favorite bands, dance/mosh like nobody’s watching, do some drugs, and ultimately feel like a kid in an amusement park (It’s just that this festival has a lot more neckbeards and Doc Martens).

Just like me, people at Riot are trying to get back the to the angsty feelings they had when they listened to these bands in their hayday. When the music stopped and everybody shuffled toward the exit, avoiding the guy tripping out in the grass, I heard a chant of “Riot Fest sucks!” And this time, I agreed.

At the time I was a little miffed that we’d be spending the entire weekend with my boyfriend’s whole family.  How were we expected to be a cool punk rock couple if his dad and little sister were following us around the whole time? They were totally confusing to me as parents. My parents liked Jim Croce and Janis Joplin. Josh’s gave him his first Sex Pistols record and helped him dye his mohawk.

That Warped Tour trip had been buried deep in the recesses of my special brain-locker reserved for high school romance until I was reminded of it at this year’s Riot Fest. Riot Fest is known for their lineup of old school punk rock bands, classic emo bands, and indie/alternative acts that have a strong and loyal fan base. As a teenager I was oblivious to the fact that my boyfriend’s parents were pretty young. They had grown up in southern California and listened to punk rock their whole lives. This was more their scene than mine.

Walking through the Riot crowd this year I felt like the grownup. There were plenty of young children there with punk rock moms and dads, themselves dressed up in studded jean jackets and leopard print. Little girls with lime green hair ran circles around their mother’s fishnet stockings while their mohawk toting brothers sat perched on their dad’s shoulders. Parents stood away from the mess of the circle pits, bobbing their heads along with their kiddos from a safe distance.

The ultimate crossover came from the festival’s Friday night closer. Weezer was stepping in to play for Blink-182 who had to pull out of the festival because of health concerns. Weezer’s “Blue Album” debuted in 1994 when I was five years old. I wouldn’t even discover the band until 2001 thanks to the release of their “Green Album”, known by my mother for the controversial track “Hash Pipe” which led her to forbid me from listening to them.

Weezer’s most recent album “Pacific Daydream” was released just last year, with albums preceding that one released regularly every two or three years. That means that new fans are being made all the time. Weezer’s crowd wasn’t people my age and a older. I was singing along to “Perfect Situation” from their 2005 album “Make Believe” with nearby teens and their even younger siblings.

Theirs was a particularly magical set including a cover of Toto’s “Africa” and Blink-182’s “All the Small Things” – songs that the entire crowd seemed to know by heart. When lead singer Rivers Cuomo asked the audience to hold up their cell phones and illuminate the crowd it wasn’t just thirty-somethings that were smiling and singing along, it was everyone.

Maybe Riot Fest isn’t as much “riot” as it is “reminisce” but that seems to be a growing trend in festivals where the lineup includes bands predominantly popular with people in their mid-20s to late 40s. People are bringing their families to music festivals and with that comes a whole new generation of music fans. Just think about what you might be compelled to create if you saw Gwar at four years old.

The general consensus seemed to be that this year’s Riot Fest was pretty chill in comparison to previous years. That may have been a bit of a let down for some but as a fellow old, I have to say I was pleasantly surprised by how easy it was to grab a giant turkey leg and take a shady seat a safe distance from the mosh pit. Maybe next year I’ll really lean in and bring a lawn chair. 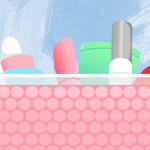 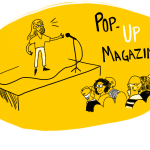