In the home gallery’s latest exhibition, performance serves as a springboard to proliferate personal experiences. 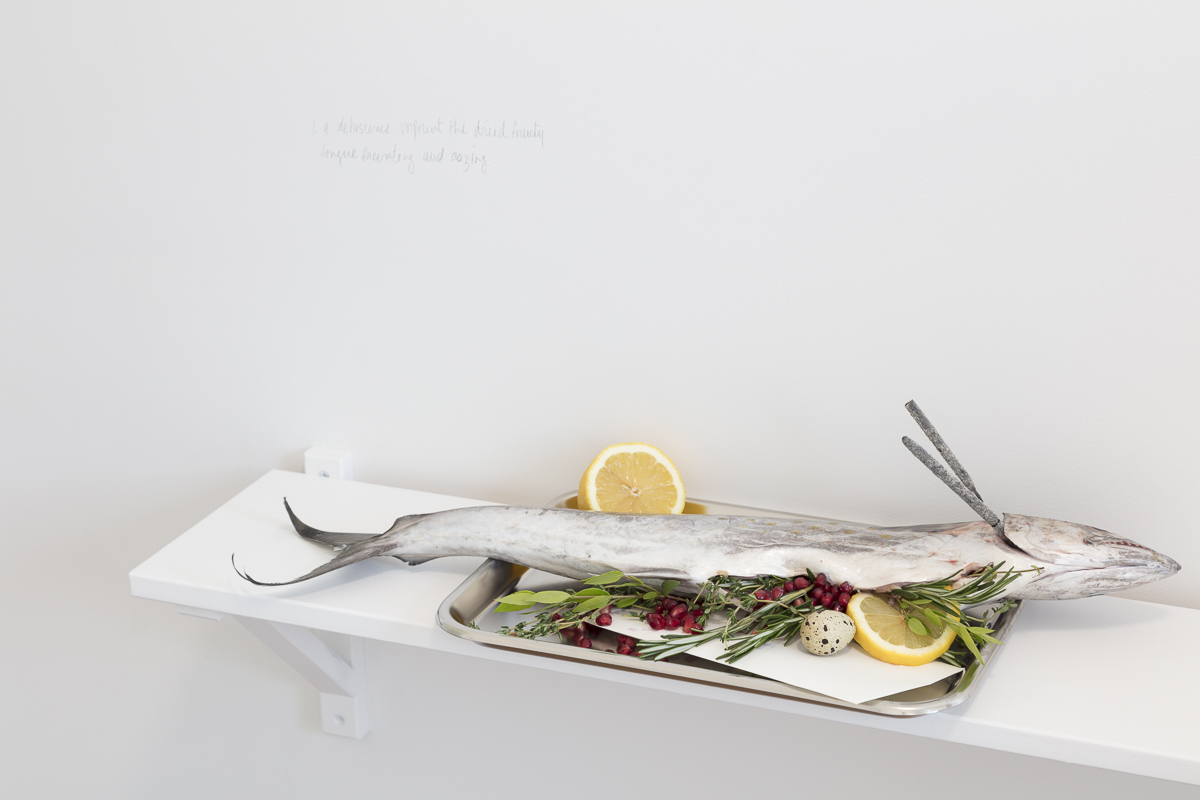 It’s difficult to get any Chicagoan who has braved the city’s infamous winter to stay inside for long during the summer. Luckily, the Saturday evening opening of “Coming Asunder” was, in part, an outdoor affair.

The exhibition, with works by the School of the Art Institute of Chicago’s own Polina Protsenko (MFA  2019) and Marie Ségolène (MFA 2019), draws its name from the writings of literary minimalist Brian Evenson. His eponymous work, “The Wavering Knife,” is quoted in the exhibition’s press release: “…all language and analysis having fled me, my dress coming off, my lover’s body touching all parts of my body until my body too was wavering and coming asunder…” Such a sensuous origin is evident in Protsenko and Ségolène’s work, spanning performance, video, writing, and mixed media installation.

“Coming Asunder,” installed in Budgie Birka-White’s (MA 2019) Ukrainian Village apartment-turned-home-gallery, To Have and To Hold, marks the gallery’s second opening. The evening was primed for cold Tecates from Budgie’s fridge, which lent to the easy chatting of an informal house party — one that just happened to include a lean gutted fish stuffed with a potpourri of herbs and pomegranate seeds installed on a shelf, as well as a performance of smearing cherries and earth. 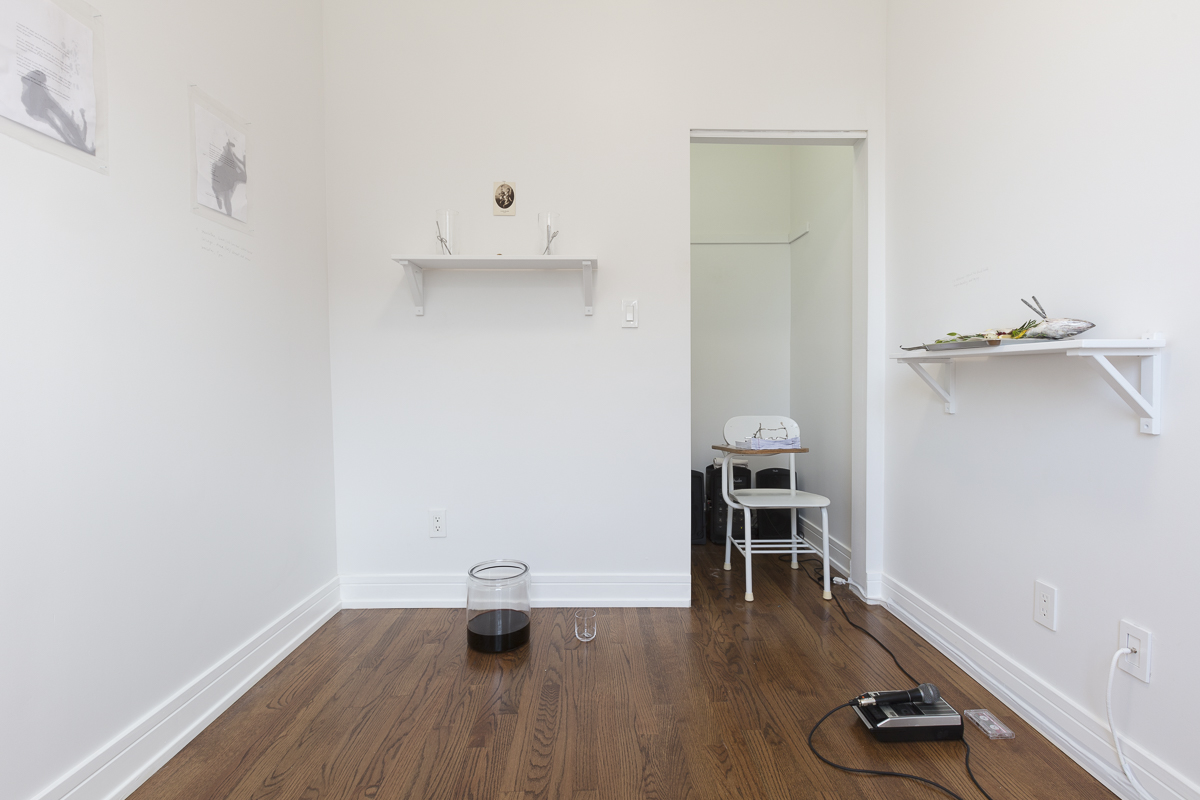 The red and white palette shared between the artists’ work brings up obvious discussions of feminine purity (i.e. the stain on white bedsheets from “popping the cherry,” or of a bride dressed in white who spills a glass of cabernet on her hem late into the evening). However, these artists move their chroma past these associations and into a deeper emotive archive. Rather than leave a mark, Protsenko and Ségolène create a slow stain. Like something seeping, their subtle works are imprinted into their respective personal lives such that they beg to become part of the viewer’s own memories.

Ségolène’s work, installed in a classic white cube of a room (a would-be bedroom in Budgie’s apartment), presents intimate letters, the aforementioned fish, and a sterile schoolhouse desk holding a neat stack of lined paper. Ségolène’s work rewards literary decoding and a close attention to raw details. It is in her work that the connection to the exhibition’s title is most evident. “Her practice,” according to the exhibition’s press release, “‘is, an attempt at understanding [Ségolène’s] own trauma and that of others, finding resilience.’” Granted, that resilience is uncovered through an embodied practice of ritualized emotional and physical aching. Ségolène lays her desires bare in her writings:“You have awakened a familiar anger in me that is interlaced with gratitude.” 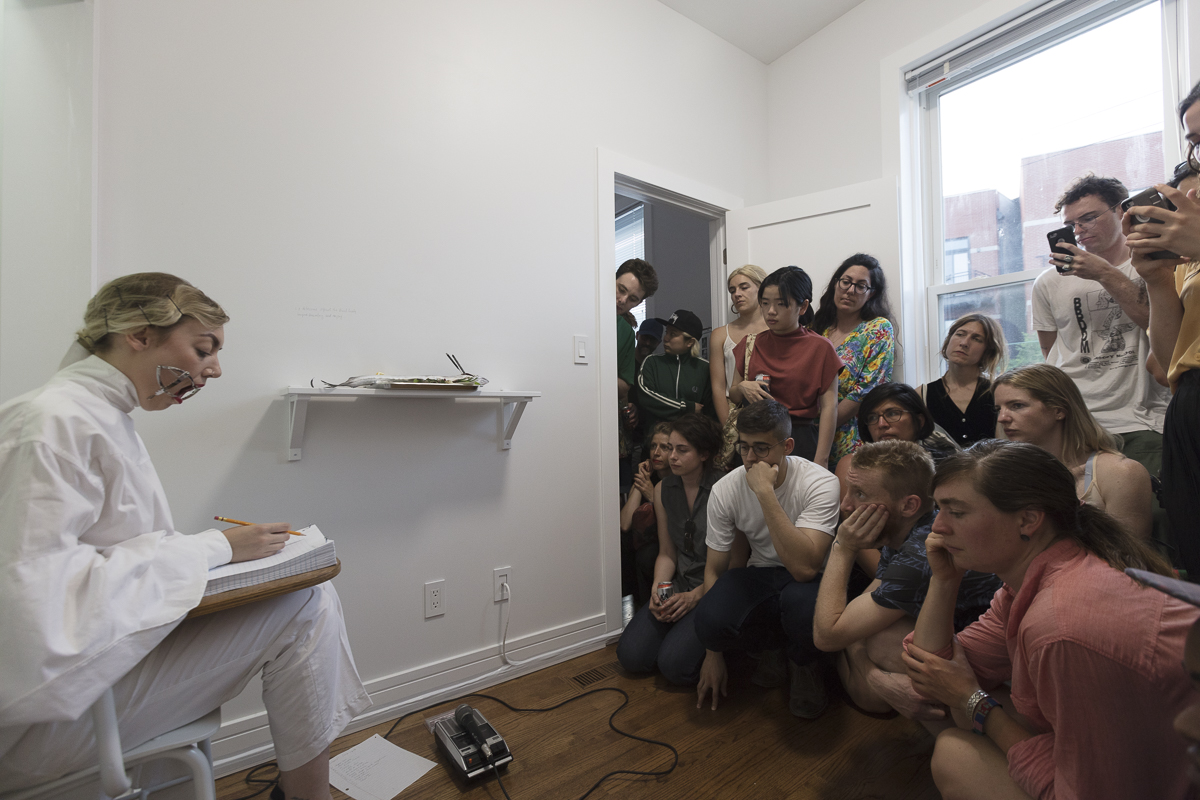 Undone, indeed. These intimate excavations, subtle in the writing (“an archive of written correspondences, therapy logs, photography and found images”), presented themselves more starkly in her performance. The classic quiet of the gallery was disrupted when Ségolène, dressed in white, inserted a Speculum-like tool into her mouth to the tune of classical music from an analog recorder: a chaste soundtrack to this raw moment. Tweezers, beakers, tiny bird eggs, and an oversized glass jar of what one hopes was only deep red wine, also filled the small gallery, making the audience a crowded spectacle against the sparse, yet intimate, installation.

In a similar rite-like work, Protsenko ground her knees into fresh cherries, indenting her flesh with the pits. The audience, Tecates now sweating in hand, placed cherries along a stretch of white fabric running down the length of the backyard. Though her performance necessitated participation, Protsenko ignored the silent audience, who, after their cherry dropping duty was done, remained hushed while Protsenko moved across the sheet (her canvas) on all fours, smashing the red goop and sooty dirt between fingers and toes, against palms and heels. 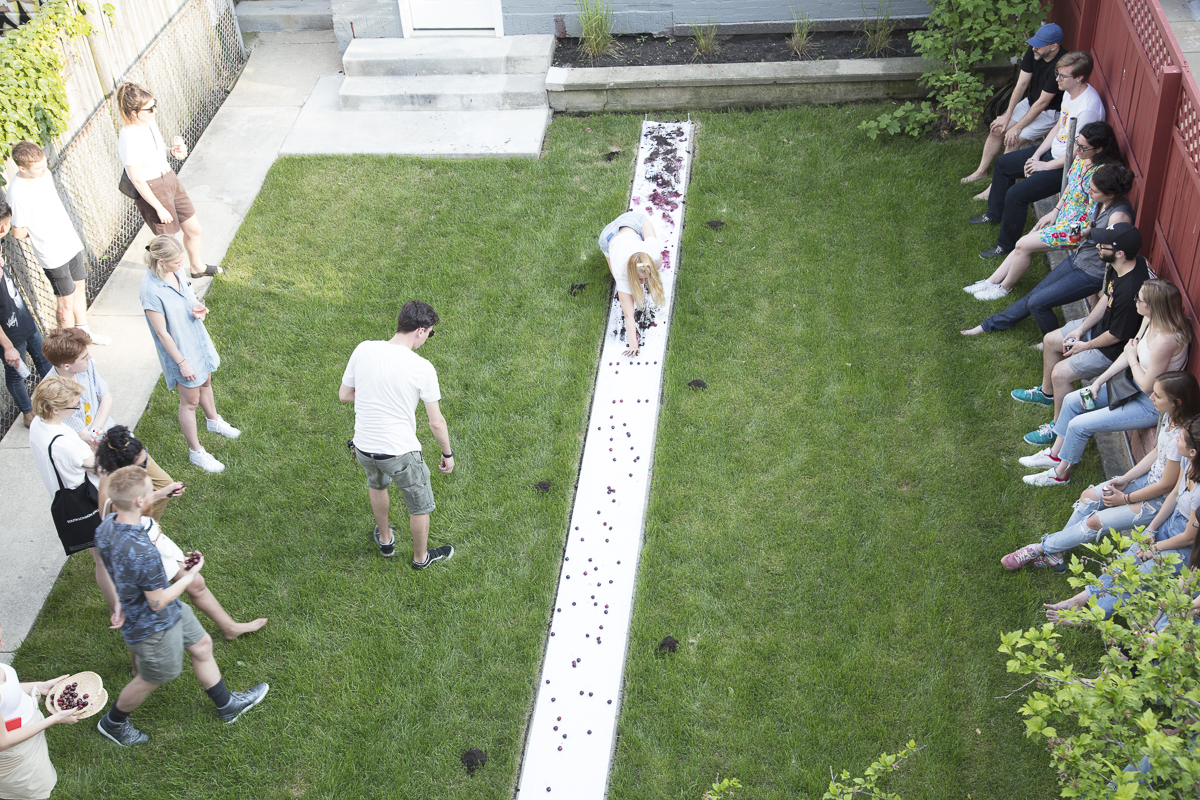 “I viewed that path as a way to meld the separate sides,” Protsenko reflected in a conversation after her performance. “This messy thick hot relational ingredient as my own position between the two. Having the cohort and the people there place the cherries themselves was my way of sharing the influence [American] culture has on me, our contributions to one another builds our characters and opinions of one another, I wanted to be vulnerable in front of those people that see me.” 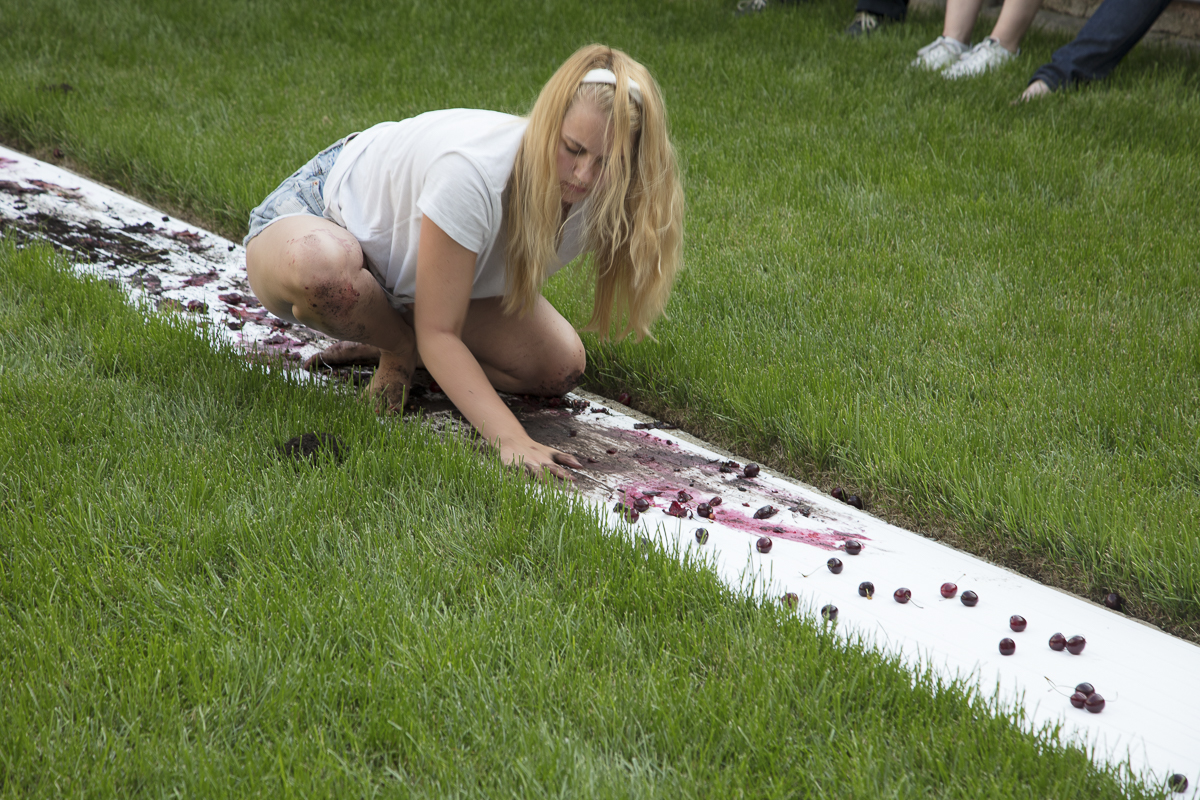 When asked about her physical experience of performing, Protensko returned to the cherries scattered across the sheet and in her video work. “My decision to use the cherries internally and externally is that the physical tension allows me to dedicate my body to the gesture.”

There were untouched berries left over by the end of the performance, as if the audience couldn’t quite indulge in the potential of a post-performance snack.

Protsenko’s additional work, a video installation inside the gallery, continues her physical tension with cherries. In her video, she crams them into her open mouth against the ceramic of what appears to be the bottom of a bathtub. An innocent-though-suggestive act is made tenser because Protensko is allergic to the fruit. 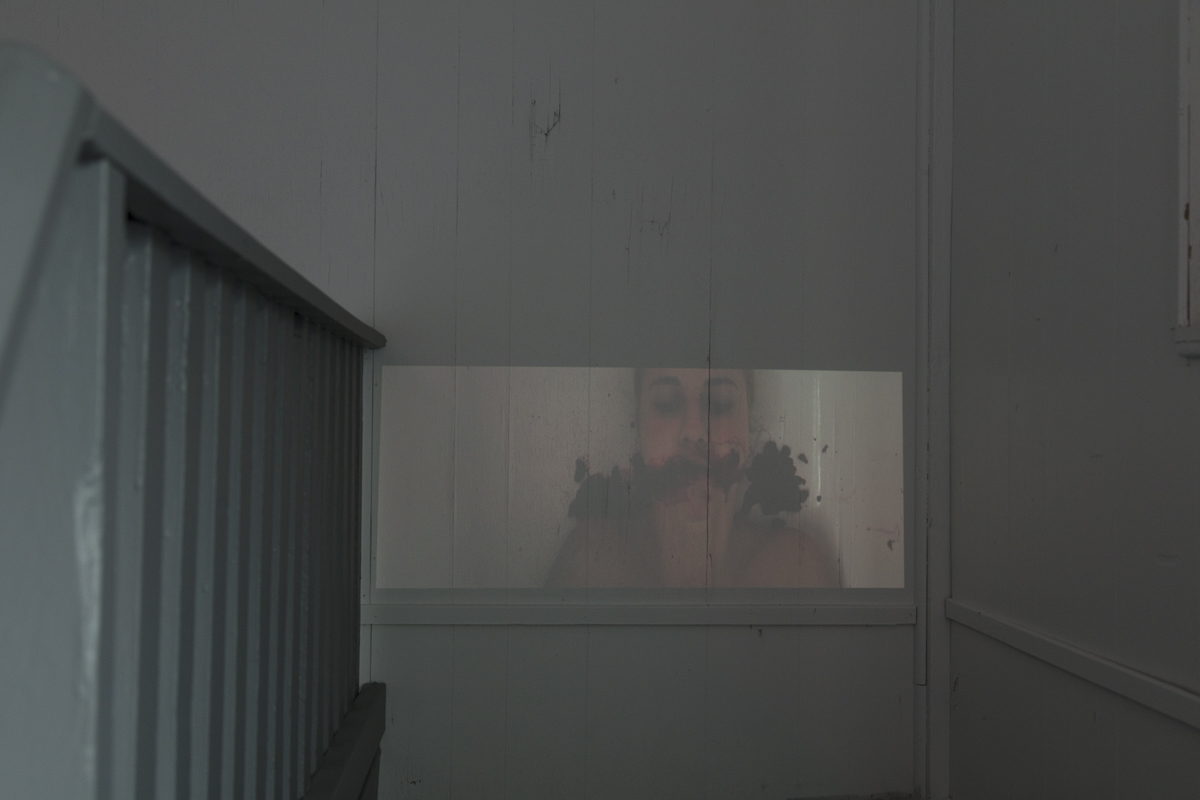 These moments, though demanding of our attention, are more subtle than the exhibition’s title would have us believe: the wafting scent of a decaying fish, imprints of cherry pits on white knees, and a muted vulnerability keeps the red and white, such bright contrasts, in a check that holds things together rather than letting them fall completely apart.

“Coming Asunder” will be open by appointment at To Have and To Hold July 27. 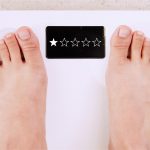