A painter and fiber artist at SAIC simultaneously discovers her practice and the history of her people.

Carolina Velez Muñiz, “Painting of Mother Mardonia from the Convent of El Niño Neighborhood in Coyoacan.” Image courtesy of the artist.

On a Saturday morning, I met Carolina Vélez Muñiz on the campus of the School of the Art Institute of Chicago (SAIC), where students work, study, and create.

Vélez Muñiz, 20, is the curatorial assistant at SAIC’s Roger Brown Study Collection and a lab monitor in the Fibers Department, where she’s also pursuing a Bachelor of Fine Arts via the SAIC Scholars Program. In addition to her painting and fibers practice, Vélez Muñiz trains as a circus performer and draws comics for this newmagazine.

Before moving the the United States two years ago, Vélez Muñiz lived in Mexico City and Panama.

“I’m Mexican, but I don’t know what that means,” Vélez Muñiz said. “I want to come to terms with that, that I don’t know a lot about my past.”

Having unanswered questions doesn’t keep the artist from describing her creative ambitions, however. “I am trying to talk about what it means to be painting or making art as ‘me’ in this era,” Velez Muñiz said. “[And about] what it means to be a woman and to have been born after [the advent of] computers.”

Vélez Muñiz pulled a textile from her bag so immaculate it seemed to have been made by a machine rather than by human hands. It was the first weaving she had done on a loom. The colors, she said, were inspired by the textiles of southwest Mexico. While weaving, Velez Muñiz said her thoughts often gravitated to permutations, or the number of combinations possible between a restricted number of variables, evoking the piece’s title, “Push/Pull.” 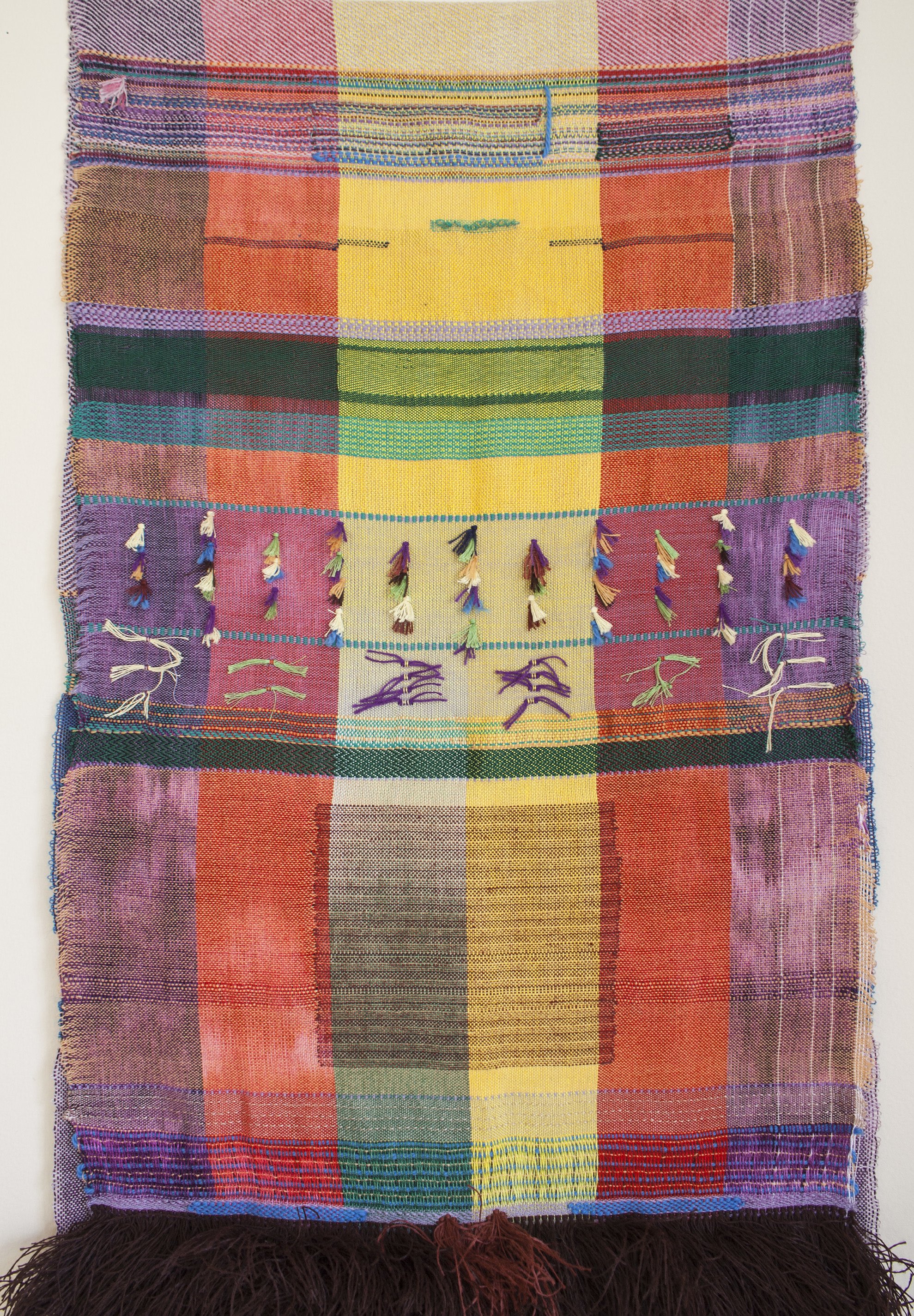 The weaving was designed to have the same dimensions as a woven cloth Velez Muñiz purchased in Mexico for 1,850 pesos, which she believes is too inexpensive.

“Here, I can sell stuff I just learned how to do for so much money,” Vélez Muñiz said. “And the traditional weavers in Mexico are getting paid so little for a lifetime of working. How fair is that?”

Vélez Muñiz participated in the SAIC Holiday Art Sale this year. “Push/Pull,” which she had spent upwards of 30 hours creating, was available for purchase. Half the proceeds of her sales were diverted towards the Society of Indigenous Weavers’s Sna Jolobil project, a strategy she hopes will raise awareness of the realities of selling handmade goods in disparate markets and economies.

She later took me to the lab where she works, on the 10th floor of the Sharp Building. There, on a large grouping of tables, she laid out some of her current works on canvas and paper. Wrapped up like morsels of food, they had been transported from her studio in brown butcher paper.

There was a painting entitled, “Painting for Avi,” with a cross and rocks in the foreground, and a banner of text at the top written in Spanish. The translation is as follows:

Three birdies in you hair

Play in the hill in your eternal

While we remember you in

Vélez Muñiz said that the painting was a kind of goodbye to a friend who recently passed away in a car accident back in Mexico City. 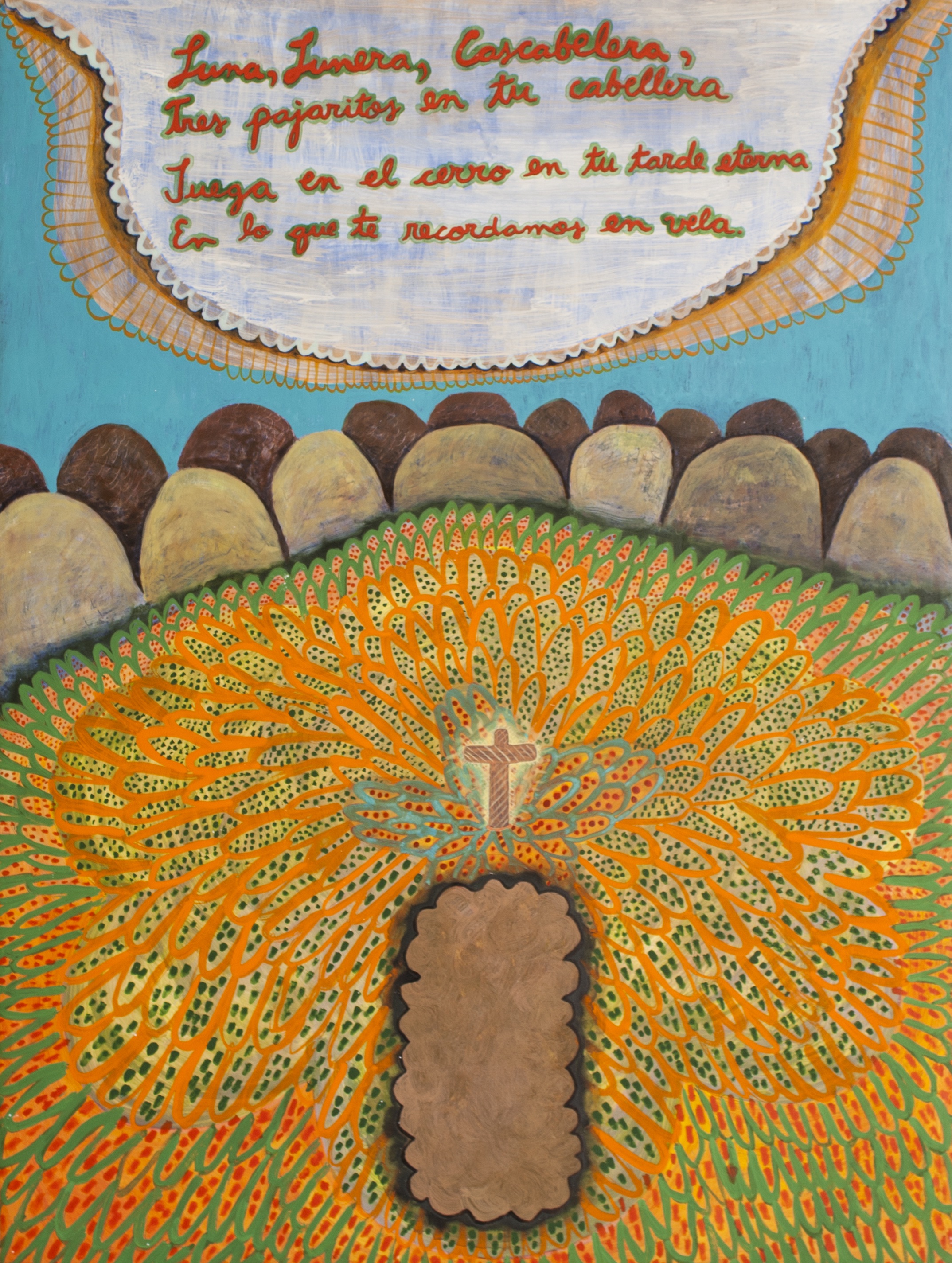 Also on the table were a series of small papers handmade and painted by Vélez Muñiz (a kind of sampler) along with two paintings on paper, one reading “The Future Is Now,” surrounded by a scalloped border; the other, featuring a scene seemingly out of a Greek myth: six nude figures swimming in a waterfall.

Four other pieces on paper comprised of pale purple and neutral-toned lines and shapes were described by Vélez Muñiz as practice for future large paintings.

“I was really thinking about modernism and abstract geometry in relation to Pre-Colombian art,” she said, “because I feel like we tend to think indigenous art in general is really ‘behind’ because they only do ‘shapes.’ But when the modernists did that, it was like ‘Oh, it’s so revolutionary. They discovered the world.’ But they didn’t. Forms are always political in some way. Pre-Colombian cultures were aware of that.”

At her home, Vélez Muñiz showed me an enormous painting titled, “Painting of Mother Mardonia from the Convent of El Niño Neighborhood in Coyoacan,” which depicts a small child sitting on the lap of a nun, surrounded by bright colors and patterns, a commonality in her work, a sort of signature style.

“I used to visit a nun when I was a kid,” said the artist. “My sister told me [the nun] was trying to make me into a nun because she gave me candy.” Vélez-Muñiz laughed before turning more somber. “If I became a nun I would have had my life figured out. Would I have been happy? Happier than I am now? Is freedom the best thing to have?”

The young artist’s work is as playful as it is planned out, characteristic of a young spirit methodically discovering the world.

“Before, I wanted to find hard truths,” said Vélez Muñiz. “But now I’m okay with finding things that just make sense. Everywhere in the world things make sense in a different way, and I want to see that.” 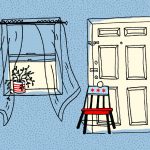 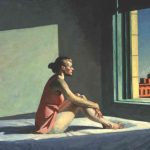