‘The Infinite Wrench’ is, Thankfully, Familiar

A late-night favorite returns to the stage — with a different name. 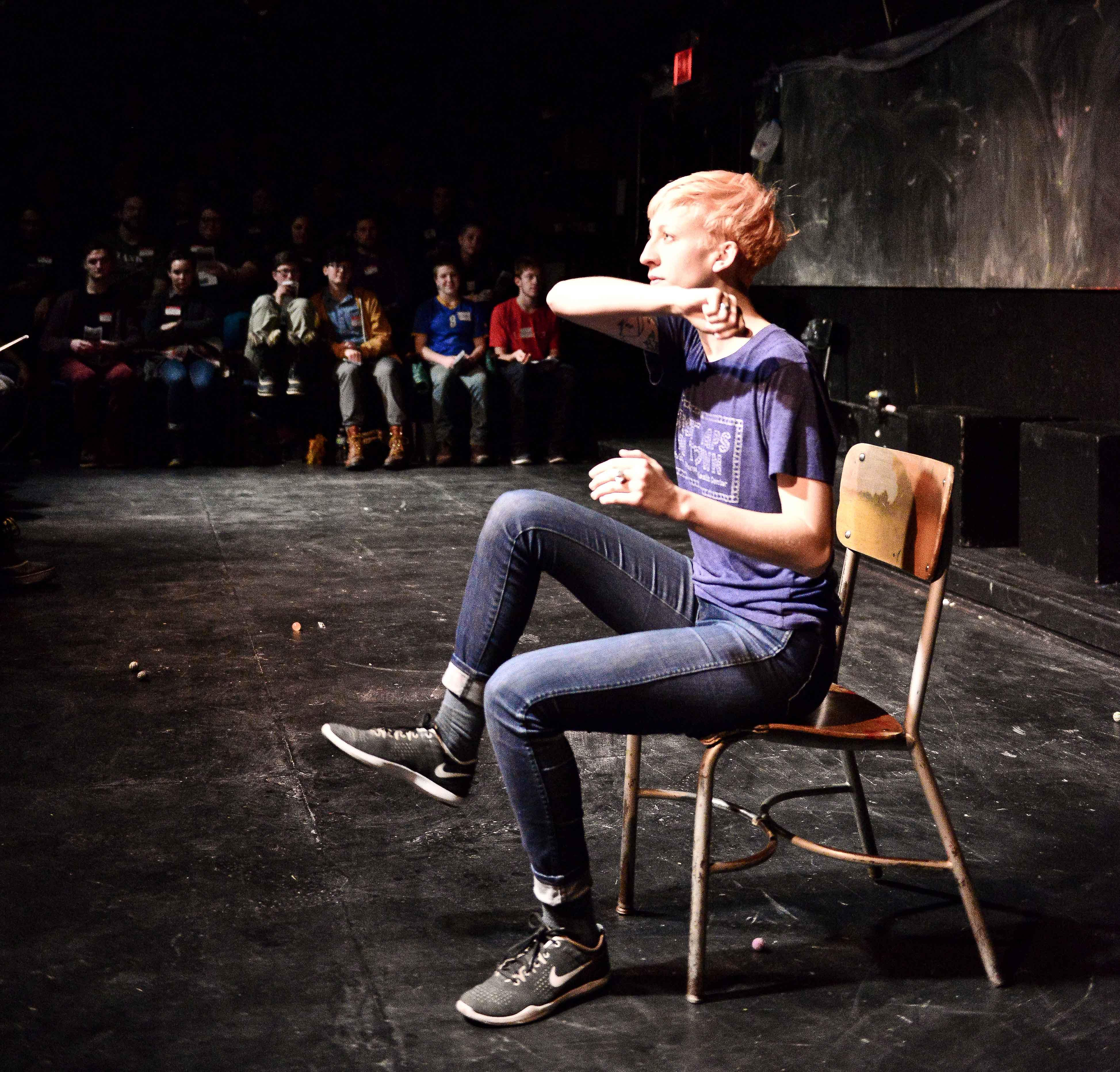 Neo-Futurist Tif Harrison engages with the audience during “The Infinite Wrench.” (Photography by Evan Hanover, courtesy of the Neo-Futurists)

Here’s a quick reminder for those who haven’t read Shakespeare in a while: A rose by any other name would smell as sweet. In this case, the rose is “Too Much Light Makes the Baby Go Blind” — the Chicago late-night show with a huge cult following, and the other name is “Infinite Wrench.” When “Too Much Light” suddenly ended its 28-year run at the Neo-Futurist theater last December, fans hoped that the show might return with a different name. If you want the Cliffs Notes version of this article, here it is: Yes, “Infinite Wrench” is the same as “Too Much Light.”

“Too Much Light,” for the uninitiated, was a show that featured a “30 plays in 60 minutes” marathon format. The form has been a hit for decades. In 2004, a Neo-Futurist ensemble formed in New York City and produced a “Too Much Light” for New York. There was even an episode of “This American Life” that explicitly adopted a similar format for radio. It seemed like something that could go on forever.

But “Too Much Light” was abruptly pulled from the Neo-Futurist stage by show creator Greg Allen last November because, according to Allen, he wanted to take back his rights to the show so he could put his “strongest foot forward to combat the Trump administration.”

“The new ensemble will be comprised entirely of people of color, LBTQ+, artist/activist women, and other disenfranchised voices in order to combat the tyranny of censorship and oppression,” Allen wrote in a press release.

The announcement came as a shock to the Neo ensemble and their board of directors, none of whom had been consulted or warned. There was also quite a bit of confusion around the call for more diversity and progressive activism; when Allen’s announcement was made, nearly 70 percent of the cast in “Too Much Light” were women, trans people, and people of color. Furthermore, the show has always had an outspoken, left-leaning bent.

Within days of the announcement, there were rumblings that Allen hadn’t told the entire story. Kurt Chiang, the current art director of the Neo-Futurists made a statement to the Chicagoist that alluded to past struggles with Allen. “While we are disappointed that it has come to this conclusion, throughout our long history with Greg there have been considerable artistic differences and irreconcilable personal conflicts,” the statement read.

Over the course of the next month, current and former “Too Much Light” ensemble members came forward with stories about Allen and his abuse of power, especially with female ensemble members. 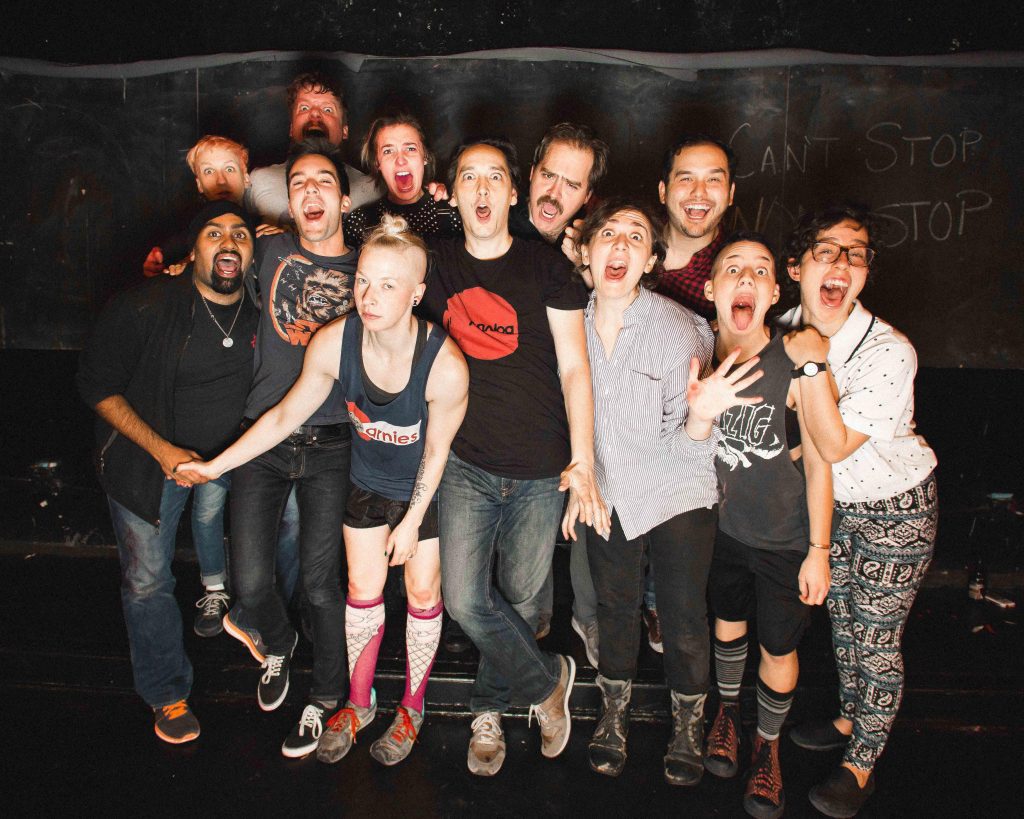 According to several reports, Allen’s ensemble status was suspended in 2008 due to an inappropriate outburst against a female cast member. Caitlin Stainken, an ensemble member at that time, told Chicagoist that Allen’s inappropriate behavior was something “we’d all experienced in private or in smaller moments before.”

So between the lines, this isn’t a story about a show that lacked diversity; it’s the story of a show that was prematurely terminated as an act of pouty revenge.

Fans were devastated, and every show following Allen’s announcement sold out, with lines of people around the block hoping to score last-minute tickets. On New Year’s Day, dozens of former cast members (including F Newsmagazine’s own Mary Fons) produced a two-show, “Best Of” show to raise money for the current ensemble. The original “Too Much Light” was sent into the ether.

Or, as is now apparent, the show was sent into the ether until March 3, when “Too Much Light” re-opened. Only now it’s called “The Infinite Wrench,” and there have been a few tweaks to the format to avoid copyright infringement.

The 30 plays were, as fans have come to expect, simultaneously funny, smart, weird, beautiful, and sad. Each play is entirely original and written by an ensemble member. The plays are always deeply personal. The cast switches out two to 12 plays per week (it’s determined by the roll of a die, as is the price of the show for each audience member), so the menu of plays is constantly changing.

On the night I went, the group’s signature short plays ran the gamut. There was one about how it feels to try to open a can of salsa when you have lotion on your hands; a perfectly disgusting one about the “life and death of a zit”; a play that was, in its entirety, a one-liner about dating as a Korean person; and a play that effectively shortened the length of night’s performance in tandem with the number of days that will be cut from Chicago Public Schools under the current budget. And there was one called “Reverse Rapunzel” — the punchline to which you will recognize immediately if you are a big fan of “Too Much Light.”

A play called “It Is Not My Play” seemed to be a subtle nudge to the end of “Too Much Light.” Cast members stood on stage in a line and talked about real issues around diversity, violence, religion, and sexism, and then stuffed socks in their mouths. The last cast member emphasized that we all have to keep trying to fight the system and tell the stories that matter, even though we might mess up sometimes.

I did laugh, and I did cry, and I did go home a different person. I forgot, almost immediately, that I wasn’t at “Too Much Light.” At least, not technically.

Really, the only noticeable difference was that the show wasn’t sold out. When I first saw “Too Much Light” ten years ago, I had to get there two hours before the door opened just to get in. The first two times I tried, I didn’t make it in time and had to go home. The cast famously baked brownies (and in later years ordered pizza) when the show sold out. I couldn’t imagine it ever not selling out.

“The Infinite Wrench” should be selling out. The cast is as strong as any cast the theater has seen; the material is more important than ever. This is the same wickedly funny, impossibly whimsical, beautifully spontaneous, deeply political show that it has always been.

Here’s hoping the rest of the city figures that out.

‘Bearing: Object, Body, and Space’ at the Student Union...