A preview of this Friday’s art opening at the Pilsen Outpost, featuring new artwork by Ricardo “Naco” Gonzalez and music by DJ Eddy Baca and 606 records. 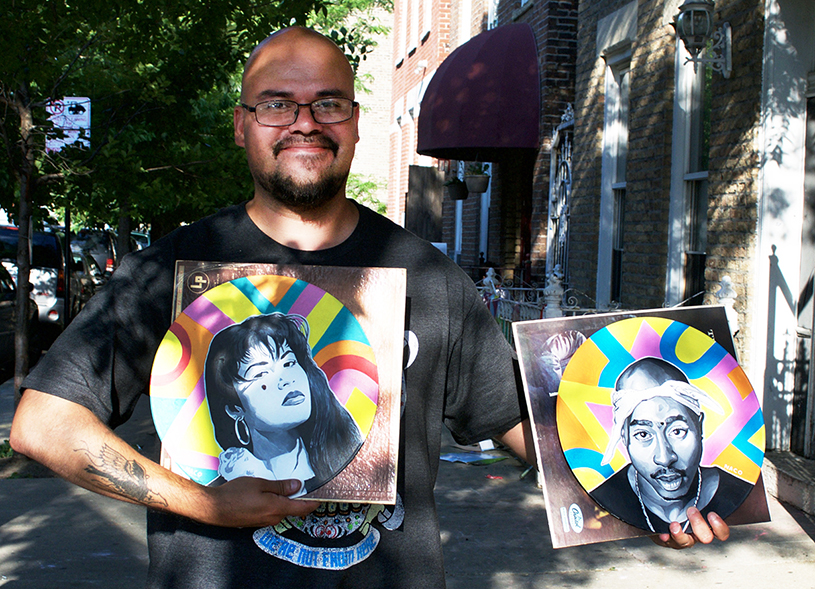 The “DISCO” opening at Pilsen Outpost opening Friday, July 1, is an exhibition about the past and present, playing homage and spinning tribute to past and current neighborhood icons. One such icon is artist Ricardo “Naco” Gonzalez.

Gonzalez’s work is often seen in the Mexican-American neighborhoods of Pilsen and Little Village. Taking a stroll down 18th Street in Pilsen, a person will see his wheat paste acrylic images everywhere, among many other prolific street artists like JASSO, Fedz, Kozmo, and Tubs.

Gonzalez’s work is exemplary of the Mexican-American experience. He gives activist nuance to commodified cultural objects like serapes, corn husks, Mexican cowboy boots, and vinyl records, by combining them with Mexican iconography like foods and candy.

Naco’s art is a refined intervention of found objects: He mixes into them the cultural messages of the Mexican-American experience. His work can be read as a political weapon that addresses present-day social and political issues of race, identity, and personhood.

The “DISCO” exhibition will feature Gonzalez’s newest work, examining the importance of musical icons internationally and locally as signifiers of community and identity.

Pilsen Outpost, the exhibition space, was created by a group of Pilsen natives to showcase artwork by local residents of the neighborhood. Gonzalez is also a founder of EXPO collective, a group that focuses on creating art exhibits for Pilsen artists in alternative venues.

The Do-It-Yourself (DIY) movement can be seen all over Pilsen as local artists of color, like Gonzalez, use it as a means to gain visibility in alternative spaces. DIY methods have a legacy of being commonplace in communities of color and blue collar neighborhoods, and have been around as long as the paletero/a or elotero/a.

The “DISCO”  exhibition will feature the most prolific artists of hip-hop, rock, and cumbia as monochromatic black-and-white portraits painted on vinyl. Famous musical icons such as Selena Quintanilla, Tupac, Missy Elliot, Biggie, Nas, and Celia Cruz will be among the many faces painted and paid homage to on vinyl.

Intermingling among these well-known musical icons will be portraits of local musicians from the neighborhood and other alternative music spaces across the country, such as those who engage with non-binary gender identities. One such portrait is of Ali Gua Gua, the lead vocalist from Kumbia Queers, a band focused on defying macho approaches to music by queering cumbia music. 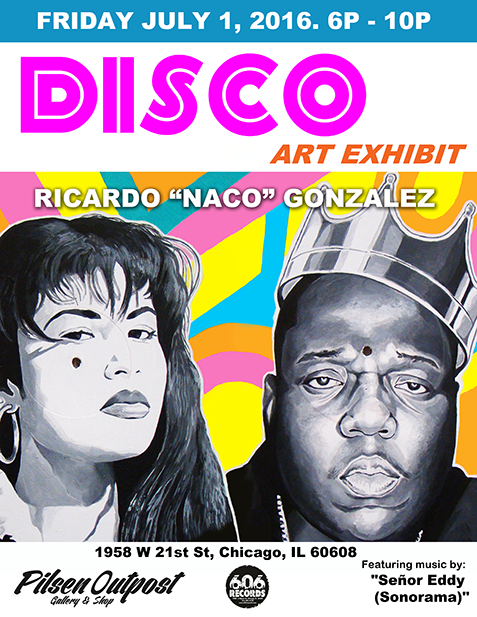 Promotional flyer for the exhibition, featuring more of Gonzalez’s work.

Last week, I had a chance to meet with Gonzalez to preview the work. As I flipped through the painted vinyl, I noticed most of the pieces were composed on old Beethoven records. The vinyl, as both a canvas and a reference to classical music, serves as a cultural clash among the hip-hop, cumbia, and rock icons painted on them.

Gonzalez’s work is an interesting reclamation of space and visibility within the cultural norms of authenticity.  It questions both relevancy and cultural signifiers in a time where the neighborhood of Pilsen is facing drastic changes in the face of gentrification. Gonzalez’s work takes ownership of a space created for the mainstream by altering vinyl surfaces to generate visibility of prominent faces of Mexican-American and African American music.

The exhibition also hosts Pilsen’s 606 records, which will sponsor the event, and features live DJs, alongside DJ Eddy Baca from “Sonorama,” a DJ Collective from Pilsen whose music can be heard at various venues in Pilsen on any given day.

DISCO’s official opening will be held this Friday, July 1, at Pilsen Outpost, located off the Damen Pink Line in Pilsen. 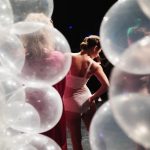 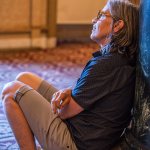