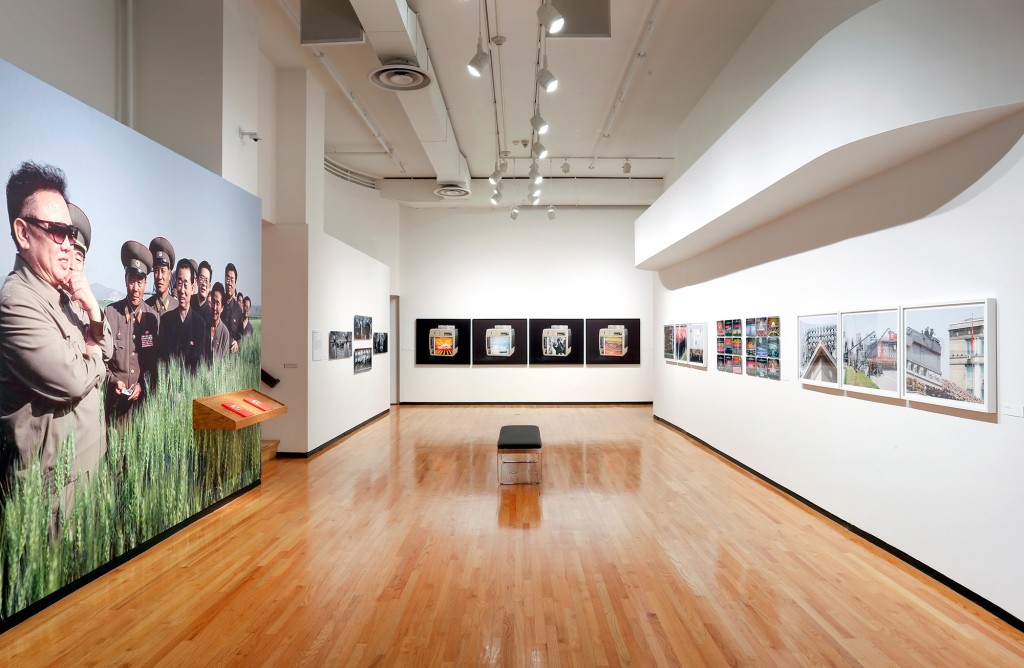 Grace Hong, age 22, is overtaken by her conflicting emotions as she walks into the “North Korean Perspectives” exhibit in Chicago’s Museum of Contemporary Photography (MoCP). “Many South Koreans view the North hesitantly and perhaps with a degree of ambivalence and apathy. I believe that my background as a Korean American allows me to perceive and respond differently,” she says. Hong is a recent graduate from Wheaton College in Illinois and is now a resident of the North Lawndale community in Chicago.

Flipping through “Kim Jung Il Looking at Things” by João Rocha, the audience glimpses the mix of subtle humor and seriousness embedded in Kim. Surrounded by diverse images, subjectivities, and perspectives of North Korea, Grace Hong quickly searches for the last names of the photographers on the wall labels. Some are Korean surnames while others are European and even, interestingly, Japanese (the violent Japanese occupation of Korea still affects Koreans’ attitudes). Some Korean American viewers notice then that Kim’s name is the only name seen throughout the exhibition that is written appropriate to the Korean cultural context by stating his surname first. All the names of the photographers, even the South Korean ones, are written according to the Western tradition of placing the surnames last.

Did names ever matter? Kim Il Sung, Kim Jung Il, and Kim Jung Un. These three Korean names are difficult for many Americans to remember correctly, along with other Korean names and words. In the recent satire “The Interview” (2014), James Franco proudly shouts out, “POONG YANG!” instead of Pyongyang, mocking the entire North Korean city. This is just one example of many mispronounced Korean names and words in the movie. The film was banned from South Korean theaters while Korean Americans watched it with their hands stained with yellow, salty popcorn grease. Grace Hong’s Korean name is Hong Hae Su.

Today, the somewhat ignorant yet carefully asked question, “So are you North or South Korean?” irritates many Korean Americans, reminding them that they are challenged to face yet another layer of cultural identity while embodying biculturalism in their everyday lives. The war never ended back in Korea. The tension persists on the 38th parallel, between North and South Korean soldiers, who have been embattled since 1953.

The number of South Korean immigrants in Chicago rapidly grew from the 1960s through the early 2000s. The record shows that there were 45,000 people of South Korean-origin in the metro area of Chicago in 2000. Today, the majority of Korean American people in the area of Chicagoland live in the northern and northwestern suburbs of the city. The once famous Koreatown along Lawrence Avenue is left with tattered signs in Korean lettering that trace back to the Korean businesses that used to be vibrant in the area.

Seung Woo Back’s series of architectural photographs of North Korea’s infrastructure in a monochromic background somewhat resembles the current state of old Koreatown in Chicago. The images emit a sense of quietude and emptiness. The title “Uptopia” questions what are, after all, a good life and a healthy society. 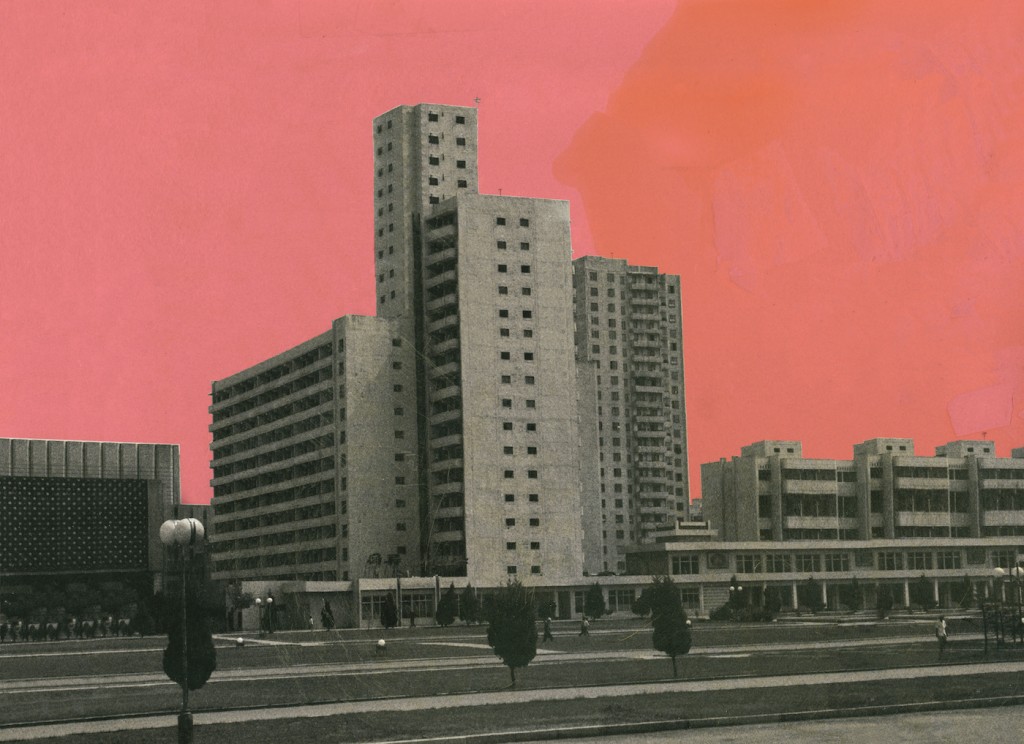 The exhibition continues to intrigue Hong with the narratives of the nameless North Koreans. She stops and looks at the portraits by Ari Hatsuzawa. A North Korean woman is smiling inside the frame. “I was profoundly caught off guard by the humanness of the exhibit. The intimacy of the photos bridges the gap that is otherwise present geographically and culturally,” says Hong. 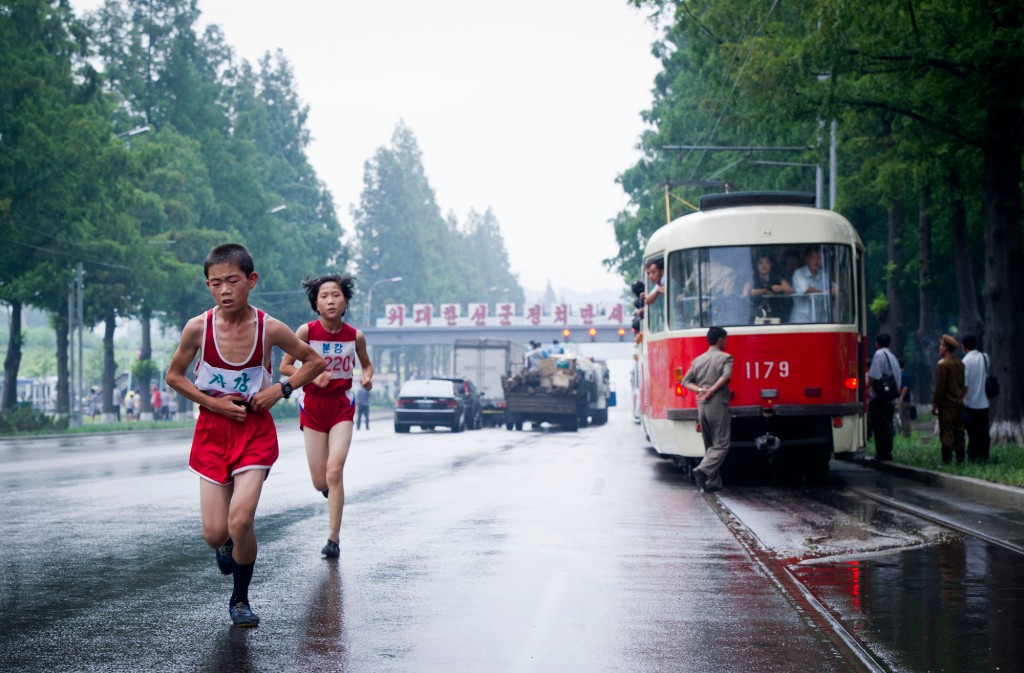 All photographs courtesy of the Museum of Contemporary PhotographyThe exhibition continues to intrigue Hong with the narratives of the nameless North Koreans. She stops and looks at the portraits by Ari Hatsuzawa. A North Korean woman is smiling inside the frame. “I was profoundly caught off guard by the humanness of the exhibit. The intimacy of the photos bridges the gap that is otherwise present geographically and culturally,” says Hong.

Other works featured in the exhibition showcase stoic North Koreans. Matjaž Tančič’s 3D portraits invite the audience to take a pair of red and blue shaded glasses like the ones at IMAX theaters. The North Koreans look popped out of the frames through the colored lenses. They stand still within their workplace. They move as the viewers move left and right.

Hong Hae Su sounds confident that she has found her answer: “The exhibition further enhanced my growing perception that North Koreans are not an alien entity to be categorized in the labels created by society, but rather brothers and sisters who adamantly and courageously demand the normalcies of life and its various experiences,” she says. 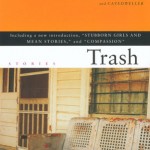 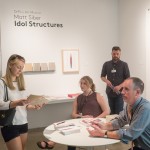