Activists gathered at Chicago’s Federal Plaza to demand a change in how Chicago Police officers’ actions are evaluated.

Gathered under the banner of #BlackLivesMatter, activists from several different groups gathered at Chicago’s Federal Plaza to demand a change in how Chicago Police officers’ actions are evaluated.

Activist Eric Kerl said that currently, CPD officers are overseen by IPRA, the Independent Police Review Authority.  “IPRA is not independent because it’s stacked with cops and appointees of the mayor,” Kerl said, adding that he believed that IPRA IS “ground zero for police torture.  Occasionally, police are prosecuted, but overwhelmingly they continue to get away with it, particularly in black and brown neighborhoods.”

As the march headed north on State Street, marchers in the front carried pole-mounted white boxes festooned with police iconography and targets. Modeled on Police Observation Boxes that can be found in high-crime areas of the city, marcher Gerrit Hatcher said they represented the “police surveillance state.”

Organizer Sarah Wild added that the boxes were the result of a collaboration between activists and artists.  Other marchers carried green street signs bearing the names of neighborhoods where, as Wild put it, “Police terror resides.”

Arkansas visitor Debbie Howard had mixed feelings about the march. “My heart goes out to the police officers who are doing their jobs right, and I know there are a lot who aren’t doing their jobs right.” She doubted that the march ” would accomplish anything.” When asked what she thought would effect change, she replied, ” I don’t know the answer to that.” 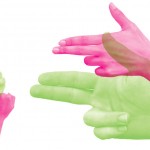 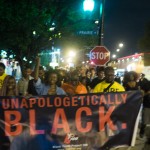