Fanboys may be disappointed by the importance of the role of feminism in the story.

The action movie is taken to a new place, a better place by Mad Max: Fury Road, a reboot of director George Miller’s post-apocalyptic trilogy. Fury Road has all of the desert-wasteland costumes, mutant vehicles, and dystopian pidgin vocab of the earlier films. It also bypasses much of the misogyny and sexism (and the overblown digital effects of late), as well as violence at the expense of story, that traditionally characterize so many action genre films.

Miller, now in his seventies, has come back from making a string of family-friendly animated films, including Happy Feet, to bring us action portrayed with practiced minimalism by powerhouse actors Charlize Theron and Tom Hardy. But make no mistake, the film’s sequences are spectacular: picture bad guys catapulting from vehicle to vehicle in a fiery car chase and a whole in the road rig dedicated,  tongue-wagging, wild-eyed sort of drummer boy, shredding a flame-shooting guitar as the “war boys” go into battle. 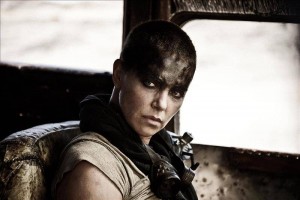 Theron’s Imperator Furiosa is the right-hand woman of Immortan Joe, who lords a water supply over the Citadel, a settlement of apocalypse survivors he has enslaved for several purposes, including harvesting blood and breast milk. Joe’s army consists of in-bred young men he’s cultivated into the obedient, Viking-esque war boys, who are willing to die for honor and the promise of an erotic afterlife. Furiosa had been kidnapped from her own matriarchal tribe as a child, and the movie moves into high gear when she tries to smuggle Joe’s beautiful and young breeding wives out of the Citadel to bring them to her people. 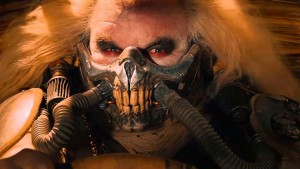 Instead of the supply run to Gas Town she is supposed to make, Furiosa takes the fortified truck the War Rig across the desert wasteland toward her ancestral homeland, and Joe and his army give chase. Strapped to the front of one of the war boys’ cars is Max Rockatansky. In a world where water and gasoline are scarce, so apparently is nutrition. Max is being used as a “blood bag,” with an intravenous line running from him to the driver.

Behind the wheel is Nicholas Hoult of About a Boy and X-Men fame. His character, war boy Nux, is the first in line in the road battle to retrieve Joe’s wives, and he takes his chance for glory, making himself and Max end up with Furiosa when a sandstorm separates them from the posse in pursuit. 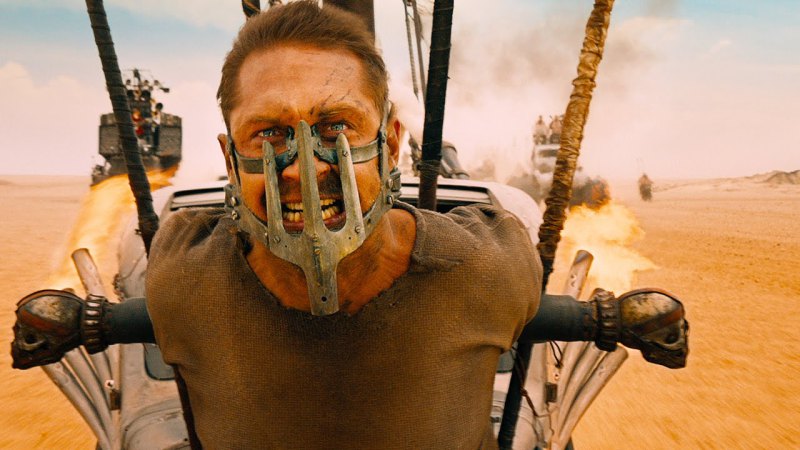 Hoult gives a lovely over-the-top performance as a spastic hooligan brainwashed by Joe’s cult. The situation brings Max and Nux into cahoots with Furiosa and the wives, and it becomes clear that Nux, and by extension the rest of the war boys as well, is a victim of his youthful naivete. Nux crumbles as he realizes that he has failed Immortan Joe. Afraid he won’t make it to Valhalla in the afterlife, he is comforted by one of the smuggled wives, as a mother would a child, and Nux is transformed. 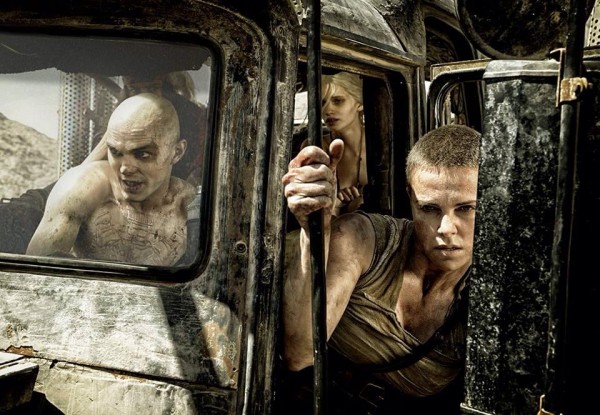 After the film recovers from a slo-mo scene where the wives rinse the desert dust from their bodies, fanboys may be disappointed by the importance of the role of feminism in the story. Its politics give the movie the flare that makes it feel special. Gender roles are blurred all over the place, and that backdrop makes the action even better. Unlike in his role as the verbose terrorist Bane in The Dark Night Rises, Hardy speaks few words in Fury Road. Both he and Furiosa communicate mostly in the looks they exchange. When the group finds the matriarchal society that spawned Furiosa, it is in tatters, no longer able to grow food. Its remaining members join Furiosa and Max to battle their way past Immortan Joe.

The indictment of maleness in the film is tied directly — and only — to violence. “Our babies will not be warlords,” cries an old woman at the Citadel when Joe asks what has become of his prized breeders. Asking, “Who killed the world,” she implicates aggression among men for the apocalypse.

This point hit home for me during my bicycle ride from the theater that night. I paused to check my phone on a sidewalk, and a man from a party happening on a nearby porch crossed the street, yelling at me to leave his neighborhood, and hit me above my ear with an empty beer bottle. Looking at the blood running down my neck and at the man that hit me, I wondered if he and I were capable of causing some kind of holocaust like the one that killed Max’s and Furiosa’s world — or if I could survive in its aftermath.

A discussion about hope and redemption between Max (who is riddled with the guilt he feels for his family’s past murder) and Furiosa seems further to define the male and the female for the scope of the movie’s universe. One gender causes pain, the other heals. As the road war continues between Furiosa and Max’s group and Immortan Joe’s army, Nux and one of the wives form a bond, and Nux suddenly allies with Max and Furiosa. In that, the movie’s hope for humankind is embodied.

A male turning away from violence and the choice of women in the movie to assert their freedom and preserve their safety, even with the use of violence, shows violent acts existing not in a dichotomy of gender but on a spectrum of choice. Whatever it is that makes us at times or to varying degrees want to cause harm to others is in all of us, and we decide when to use it. What Fury Road also shows us is a very fucking rad action film. 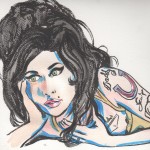 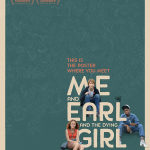 One Response to Mad Max: Beyond Feminism