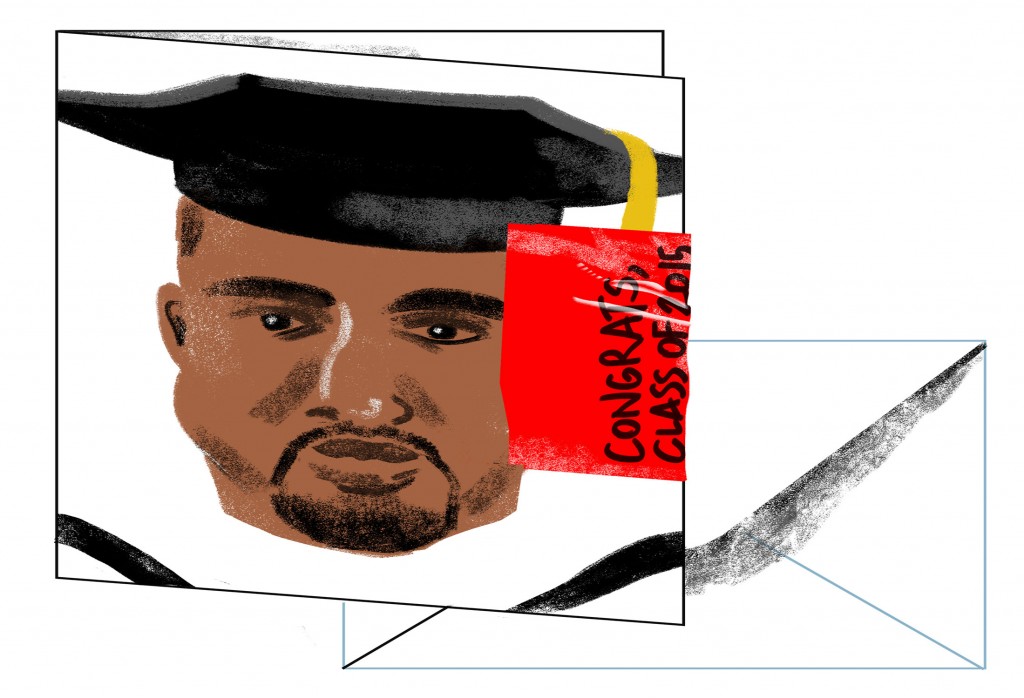 It’s been a tumultuous couple of months for Kanye West and The School of the Art Institute of Chicago (SAIC). When SAIC announced that Yeezy would receive an honorary doctorate during the 2015 commencement ceremony reactions ranged from well wishes for Kanye to petitions to bake his doctorate into a cake. The night before the commencement ceremony, Mr. West decided to give a free artist lecture to SAIC students and faculty. He talked about everything from his desire to collaborate with Disney to how his synesthesia influences his creative process. Mr. West was kind, engaging, and equally fascinated with the SAIC student body as we were with him, proving that despite what the “haters” say, his presence really is a present.

Even before the lecture began, the air was laden with excitement at the prospect of Yeezy being near. The line for the lecture wound around the block, full of audience members eager to give their opinion on Kanye.

“He was the first rapper where I followed his whole career. The way he introduces art, music, and popular culture all together is very cool,” said New Arts Journalism candidate Amy Sardino.

The minute West walked on stage, the entire room was on their feet. West smiled as he grabbed the microphone, saying that he was going to start the night off with a question and answer, “I riff off that as opposed to preparing anything.” Several students were asked to prepare questions ahead of time, including F Newsmagazine contributor Ituno Ebijimi and fellow Chicago-based rapper Maryiah Winding.

When asked whether or not his work has been influenced by the events in Ferguson or Baltimore, West explained, “I work really slow … about four to six months. I don’t like to complain before I can offer a solution. I feel to understand what we’re dealing with, and it’s not all good.”

At one point, SAIC student Sonnie Wooden asked West what he could do — the South Side native had seen his friends get shot, he was the first person in his family to go to college, and when he asked the question, he was at a loss for words. West fell silent, his facial expression was contemplative. Near tears, he answered, “I don’t know.”

West said after a moment, “because it’s not all good … it’s fucked up.” Above all, West was incredibly empathetic, his willingness to listen to students acted in a direct parallel to the media’s portrayal of someone who was stoic and humorless.

But Kanye’s energy was effervescent. When you go to enough artist talks, you start to build a gauge as to whether or not someone really wants to be there. West didn’t just want to be there — he was ecstatic. He joked with students, explaining that music could really set the tone of an event.

“You know there’s different kinds of drugs, if anyone’s ever been on vacation and taken drugs before … you’re in art school so I’m just gonna assume. There’s drugs that make you tell the truth, drugs that make you happy, make you sad … there’s different kinds of moods that drugs can put you in. With music, it’s like a drug. You know, people go on vacation and they say … I won’t say the “D” word but,” glancing around the room and whispering, “did you bring the drugs?’ And they say also, ‘did you bring the music?’ These things go together. The interesting balance between making enjoyable music that also had truthful information in it. It’s always been a very fine line, of when to break the high.”

The day after his lecture, West received his honorary doctorate and was subsequently criticized by the media for not smiling during the ceremony. The night before, West was grinning happily all through the night. His style of speaking is quick and witty, but there’s also a meandering quality to it. For Dr. West, everything is connected.

“You know, in the music business, the only color they see is green. Green’s my favorite color, not a big fan of blue though,” he paused and quickly added, “the color, not the child.”

He was eager to share insights into his own creative process as a fashion designer with the student body. He cites Howard Hughes as his personal Yoda, and swears that “luxury is in the proportion.” Yeezy also touched on how tough it was for people to take him seriously in the fashion industry, “I was considered not to be a threat to what they do.”

West actually, “went into debt as a rapper,” in order to finance his foray into high fashion. His passion and drive to succeed within the fashion industry is evident. He left Nike for Adidas because, “they weren’t giving me the opportunity to grow.” West is excited about his future as a fashion designer, stating with signature aplomb, “I know I’m going to be a good fashion designer  …  I’m motherfuckin’ Kanye West.”

It’s clear that West strives to better himself as an artist and a person. For almost a decade, the media has scrutinized the seemingly vast chasm that is West’s ego, finding his unwavering self confidence to be off-putting, even West himself referred to his ego as his “Achilles heel” during his lecture at Oxford. Seeing West in person, I was struck by the confidence that radiates off of him.

As artists, we are constantly told to be our own bosses and advocate for our art, so why shouldn’t we praise someone who does just that? If anything, West’s confidence should be aspirational; we should all strive to believe in ourselves as much as Kanye West believes in Kanye West.

Above all else, West considers himself an artist, and because of this he takes the implications of being an artist very seriously. “I feel a responsibility to push people,” West said. He also said that as artists, “our responsibility was to the truth, no matter what.” He encouraged us to “never lose exactly what you feel.” Saying that the conforming and compromising which sometimes constitutes adulthood equates to “social debt.” In person, West is unapologetically himself, there are no pretenses of fame or prestige, he’s just Kanye.

At the end of the night, West invited everyone in the audience to shout out their own questions because oftentimes, it’s hard feel like you’re being heard at these kinds of events.

One audience member asked West what receiving his doctorate meant to him. West said that since his late mother was a professor at Chicago State, this doctorate has a special significance for him.

“My mom would trade in every single award for her son to get his doctorate,” West said.

It was wonderful to see someone who is continually excited about the potential of the art world. His passion is contagious, and it will hopefully inspire SAIC students for generations to come. Two weeks after the commencement ceremony, West’s excitement about his doctorate has yet to wane. Sunday night, at the Billboard Music Awards, West’s sisters-in-law Kendall and Kylie Jenner even referenced his doctorate in the introduction to his performance calling him “a friend, an inspiration, a brother- and now, a doctor.” His performance of “All Day” and “Black Skinhead” was subsequently censored for a full minute. However, West performed without lip-synching in front of a smoldering background full of meticulously planned pyrotechnics. His commitment to the aesthetics of the performance while being fully present during said performance once again proves that West is, and maybe always has been an SAIC student at heart.