Is Racial Bias Behind the Honorary Degree Uproar?

Kanye West will be getting an honorary doctorate from the School of the Art Institute of Chicago (SAIC). The announcement was made on March 17, with serious rumors circulating for two weeks prior. Even before the news was made official, a significant portion of the student body reacted critically to the idea of West receiving a diploma. The central concern that students have taken up is that our degrees would become less valuable.

It is rare for SAIC students to be upset en masse. The very idea of West receiving a doctorate — primarily substantiated by mere rumor — brought a noticeable response that countered this pattern. Many students disapproved; many also celebrated. Some didn’t care. Overnight, it became a hot issue on campus, polarizing at the outset. With it, questions were raised: What is an honorary doctorate? How are recipients selected? These inquiries tend to casually arise only on graduation day when the handful of awards are distributed, hands shaken. The brief award ceremony takes no more than ten minutes. Most forget about the curious honorary doctorate as quickly as the commencement program is thrown into the trash or glued to the pages of a scrapbook. Now suddenly, we want to know more.

These degrees mean nothing in and of themselves; rather, they are ascribed with symbolic value. Honorary doctorates are given out to recognize achievement amongst makers and doers that aren’t always tied to our school or immediate art communities. The degree creates a kind  of tie that says, “We see you, keep it up.” The gesture of giving the diploma is more important than the piece of paper itself. It is not a degree but a statement.

Kanye West is a doer and a maker mostly recognized as a musician and video artist. His talent does not need to be proved here; the amount of cultural impact made by West is inarguably immense. It is likely that his work will have the staying power of Patti Smith, who also received an honorary doctorate from SAIC in 2011. There are many differences between Patti Smith and Kanye West, including their age, gender, style of music, and the fact that one of them dated Robert Mapplethorpe. The difference I wish to point out here is that Kanye West is black and Patti Smith is white. The notable amount of criticism West’s pending honorary doctorate has received is covertly racist. This has not been the dominant view, but it is worth addressing. I’m sure no one has said West doesn’t deserve the certificate because of his skin color, but the prevalent attitudes about him are grounded in a more complex presence of racism.

Arthur Chu has written on the perception of West’s accomplishments, claiming that his work ethic is often misinterpreted. West has been criticized as having an overwhelmingly large ego. This judgment, according to Chu, is fueled by a kind of intolerance amongst whites toward things like self–promotion and perfectionism in people of color. These are things more readily available to whites, especially men. For majorities, we call aspirations “goals.” For minorities, we call them “ambitions.” Chu goes on to point out the difference between “tangible” (quantitative, statistical) and “intangible” (qualitative, “being oneself”) accomplishments. He says that people of color must work to obtain tangibles and rely on them more than a white person who has the freedom to fall back on intangibles. It is by this token that I claim that the negative reactions are covertly racist. We too easily make an ostensibly moral criticism about Kanye that is really grounded in a kind of white discomfort about race, or as Robin DiAngelo calls it, “white fragility.”

Achievement is an interesting concept at our school. For undergraduates, SAIC does not have a grading scale or even use a pass/fail system; we use credit (CR) or no credit (NCR). Many of us may well recall gleefully explaining this system to our families, our university friends, or our loan officers. Our main hope has been that people won’t confuse America’s most expensive school for one large group therapy session. To those who wonder about the value of your degree: that’s completely up to us as individuals and makers. The work already done will not be affected by honorary doctorates, the undergarments your friend wears to graduation, or the current state of traffic on Lake Shore Drive.

It’s odd for us to be so vehement in our feelings on this particular honorary doctorate. Racism aside, it’s actually refreshing. To see people up in arms, excited, and impassioned is unusual. Exhibiting these kinds of emotions has become less fashionable in the art world. If a gallery show opens and the artist makes “good” work, we go because it is the logical thing to do. There’s no fanfare or shouting; one apathetically enters the gallery as if it were a public restroom with all the sacredness of Chartres Cathedral. We’ll speed read a Semiotext(e) paperback while riding the Blue Line and gladly take a polystyrene cup of champagne later on. When was the last time we got angry? There are many things in our immediate surroundings to be upset about: the precarious employment situation of our school’s security guards, the adjunct professor trend, and our police state, to name only a few.

In addition to congratulating Kanye West for the recognition of his talent, we ought to consider learning from him. His staunch criticism is unpalatable and revolutionary. His dedication to making should be something we appreciate, not condemn. While SAIC has a wealth of instructors and professors, we are also teachers and students of each other. Looking to our peers, even if from a distance, there’s an opportunity to learn, question, and react. It’s best to understand this responsibility now, because let’s face it, the road is long. 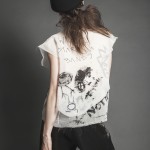